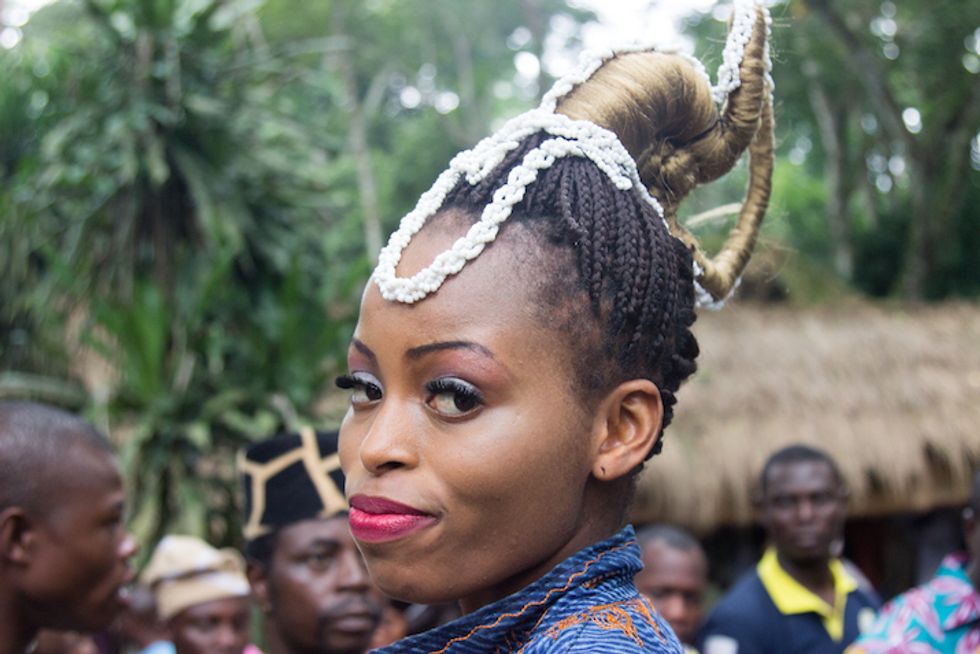 Held every year in a sacred forest on the outskirts of the southern Nigerian city of Osogbo, the Osun-Osogbo Festival is a two-week-long celebration of the Yoruba river goddess Oshun. The festival, which begins with a traditional cleansing of the town (Iwopopo) and ends in a procession of the people to the Osun-Osogbo sacred grove, attracts attendees from all over the globe.

Among those in attendance this year were Adebayo Adegbembo of the Lagos-based startup Genii Games Limited, and Nigerian street photographer Ife Martins. Together, they set out to document the festival's worshippers, spectators and tourists alike. "Our objective was inspired by the need to communicate its essence to ordinary people whose interpretation of African traditional festivals and people associated with them is something diabolic and fearful," Adegbembo told Okayafrica. They began their coverage on Isese Day, a day set aside for traditional worshippers to parade and showcase their faith to the public, and continued the following day during the festival's grand finale, in which they joined the crowd at the Ataoja Palace in Osogbo waiting for the emergence of the Arugba (votary maid).

Adegbembo elaborated on the festival's significance in an email to Okayafrica:

"Year after year, the festival receives significant attention from the media to actual worshippers, tourists and spectators. My dad covered the same festival in the early nineties and spoke of a low turnout dominated by local indigenes. However, the festival has since grown to international status in recent years, a possible effect of Susanne Wenger’s works and recognition of the Osun-Osogbo grove as a UNESCO heritage site in 2005. Today, the festival enjoys tremendous support from the government and private sponsors also jostle to liven the annual celebration.

For all that's said about the declining fate of our indigenous cultures, the Osun-Osogbo Festival gives hope. Its continuous embrace centuries on by the people - old, young, far and wide, worshippers and spectators alike – is further testament to its significance."

Take a look at the 2015 Osun-Osogbo Festival photographed by Ife Martins in the gallery above. For more, read Adegbembo's full festival coverage here.

Adebayo Adegbembo is the founder and lead programmer at Genii Games Limited, a Nigerian start-up focused on the development of interactive mobile apps, videos and games around African cultural elements for kids. Follow him on Twitter at @technobayo.