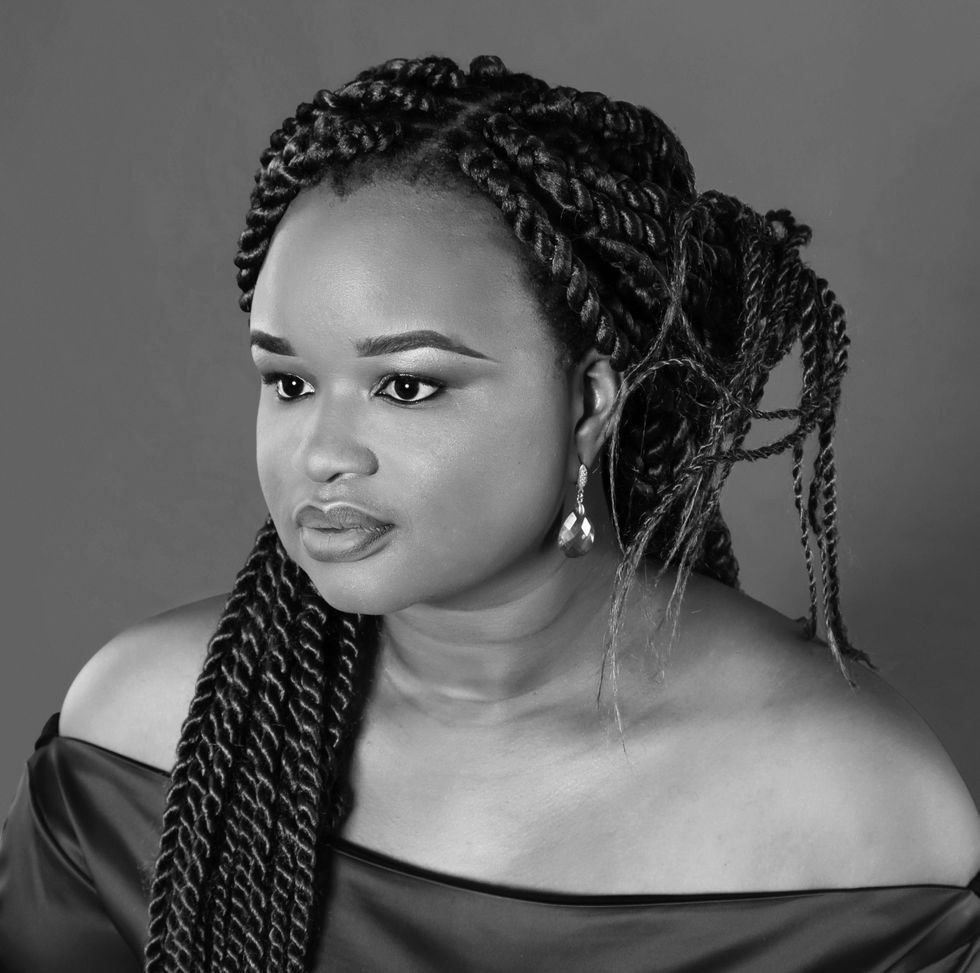 We speak with the Nigerian author about the success of her debut novel, and breaking the boundaries of "African Lit."

"I have always been drawn to dark topics," says Oyinkan Braithwaite, the 30-year-old Nigerian author behind the critical darling of a novel My Sister, the Serial Killer.

Her declaration helps explain the subject and title of her debut novel, which tells the story of Ayoola, a young woman who has developed a not-so-healthy habit of murdering her boyfriends, leaving her older sister, the book's protagonist, Korede to clean up her mess. You may have noticed it's ubiquitous cover—which features a young black woman wearing a headwrap, casually looking on as a knife-wielding hand is reflected in her sunglasses—on your timeline or at your local store. The internationally-released, Nigerian-made novel sits confidently on retail shelves previously reserved for mass-market thrillers.

The dark and humorous, Lagos-set novel is extreme—but not just because of all the murdering that happens. It also examines the extreme nature of the many things that can push people to the edge. For the sisters, they are: intergenerational trauma, abuse, the prevalence of a culture that rewards beauty above all else, as well as having to battle with their own personal shortcomings—just to name a few.

Sure, we don't all become serial killers, but for many of us, the life experiences that lead the girls to their violent actions aren't all that unfamiliar—which, despite all the bloodshed described in the novel, is perhaps what's most chilling about My Sister the Serial Killer.

We got a chance to speak with the author of the popular novel about writing a crime-thriller from a Nigerian perspective, the parameters of 'African Literature," the underlying themes in My Sister the Serial Killer, and what's next for her as she continues her career as a novelist.

As far as My Sister The Serial Killer goes, I think the first time I had the idea of a woman fooling men was when I was researching the black widow spider in 2007. And ever since then I've played with the idea a couple of times. My Sister The Serial Killer wasn't the first time I was playing with this idea which made this book easy to write because it didn't feel completely new.

What drew you to this crime thriller genre? I feel like for some, especially in religious places like Nigeria, talking about killing in a somewhat casual way can be especially jarring and even taboo.

It's interesting because sometimes I do see crime thriller elements in it, but I wasn't really thinking of it in that way and I didn't have to concern myself too much about what people would think because at the time I was writing the book for myself. I didn't actually think it would be published or it would get to where it's gotten now, so I didn't have to worry too much about how people would receive it. It was just me, myself and I in my room doing what I found to be entertaining. But certainly, people have asked me since the book came out, about how it might influence the minds of young Nigerians. And even non-Nigerians—I've seen comments online where some people feel as though I'm endorsing certain things, which was not my intention. I'm glad now that I didn't have to think about those things then, but I have had conversations with my dad in the past, because I generally am drawn to dark topics, and we've had several conversations in the past with him sort of reminding me that I have a responsibility to the world to put out material that will change people for the better.

I value what he says, but I do think this book has the potential to do that. I don't tell the reader what to think, but I think if you have a certain mindset, you will see what it's saying.

I think another thing that it contributes is that it gives African representation to a genre we don't generally have a lot of representation. A crime thriller set in Lagos, it's focused on two young women. I feel like goes beyond the boundaries of what people consider, typical African literature. Is that something you were conscious of?

I just write what I like, and I'm not limited by what has been written before in Nigeria. I always knew that my future wouldn't necessarily be like my predecessors just because—and that's not to say I didn't enjoy reading their work—it's just that I've been aware from the get go that my influences in the literature world have been different. I come from a different literary background in terms of the books I'm drawn to and the things that I read, so I was never going to write like that and I didn't have to make a conscious effort not to write like that.

What are some of the books that have inspired your novel and which authors do you enjoy personally?

You mentioned earlier that this book was for yourself. So are there elements of the book that you pulled from your real life, from experiences that you've had, from family relationships? Any connections?

One thing that was really on my mind when I was writing this book was this idea of beauty and the world's perception of it. As a woman, I think we have very interesting relationships with beauty. A lot of it is thrust on us and I've had a couple of instances I think in the course of my life where I thought, "hang on, wait a minute, there's something about this that's not quite right about this." I have been aging, and changing in look and size and all these kinds of things and seeing how differently I'm treated in different phases of my life. It's weird because you think, "but I'm still the exact same person I was, I haven't changed in any way, but people's reaction to me has." They've altered their behavior based on how I look on the outside.

It's something that, I suppose, irritated me enough that I wanted to see what would happen if I wrote about it. This book is an extreme in many ways, but I do think that there's an element of truth to it that people overlook: that people forgive so many things when it comes from someone who's attractive, who has something that they desire.

Cover of 'My Sister, the Serial Killer."Image courtesy of Doubleday

I feel like you've built really complex characters in the sisters where it seems as though they're almost polar opposites, but it's clear through their actions, that it's not simply that black and white. Can you talk about building multilayered characters and the unique family dynamic that exists?

They're products of their past and the trauma that they've been through, but at the same time, it's incredible that Korede still didn't put up with so much and didn't give in. I think that we're so focused on Ayoola and the fact that she went through a lot, but we forget that because Korede is older, she's locked in the role of the protector, and because she's locked she takes it to extremes.

Ayoola is also locked in playing the part of the child, she knows she's going to be taken care of no matter what. The truth is, if Korede stepped back a little bit, Ayoola would be forced to face her own actions, but she never has to because Korede will go above and beyond to make sure that she doesn't have to deal with real life. Yes, Ayoola's the one that's killing off the men and all that, but Korede also had a very violent streak. She's got her own sort of thing going on there.

When I compare this book to things that I've written in the past, I know that even when it's not intentional, there are some themes that come up again and again, there are also things that interest me generally as an individual. They're recurring themes that shape my work and come about whether I'm intentional or not. Generally, I'm interested in women and in women having their own agency, I wasn't trying to write a feminist book, but because I'm a woman who believes that women can do anything, whenever I write characters, that will always come up.

I'm interested in the dynamic between men and women, and family is something that has come up in my writing before. I find the family structure interesting to examine because there's so much that goes on in the roles that we play in a family. Especially in Nigeria where it's more than just your nuclear family, you have your extended family to deal with, you have all the expectations forced on you—all the responsibilities thrust on you in this kind of community.

"People forgive so many things when it comes from someone who's attractive, who has something that they desire."

This is your first novel. Can you give us some insight into what the writing process was like for you?

With this book, because I knew it wasn't going to be long, I took a different approach, and I was writing it for myself so I didn't have to worry about if what I was doing made sense. The way that the chapters are in this book is pretty much the way I wrote it. I opened up a Word document, wrote three lines and thought, "oh well I guess that's the end of that," and then closed it and went on about my day. The next day I would open a new Word document and write another chapter. Most of the time I would have looked back to see what the previous chapter was and it was a lot easier for me that way because writing a novel can be daunting, but when you think about it in parts, it's doable and it's easier to kind of keep it engaging.

You're less likely to waffle I think because you're not thinking about how to fill in space, instead you're thinking of how you can do the most in the chapter that you're in. We can be focused on that piece and not necessarily worry about the bigger picture. So that's kind of how that, this particular book made out.

How does it all feel for 'My Sister the Serial Killer' to be so well-received?

It's incredible—mostly just how nice everybody is about it and how supportive everybody is, and how much love and support the publishers and the agents have given me. It's weird when I was young and decided I wanted to be an author, social media wasn't around. I don't know because I wasn't a writer then, but I reckon back in the day, the only time you would know what someone thought of your book is when they met you. But now, we can get feedback online and it can be really, really scary. Sometimes people give me negative feedback and tag me and I wonder like, "why? Why are you doing this? What's the point?" But even the good feedback, you feel like sometimes you can't live up to people's good opinions of you and of the book. It can be overwhelming but so many times I'll get a message from somebody and it will totally make my day. So it's a weird thing going on.

What's next for you as a writer?

I am trying to work on a novel right now. It's harder than this one, so I don't know if I'll go all the way through to the end—we'll see.