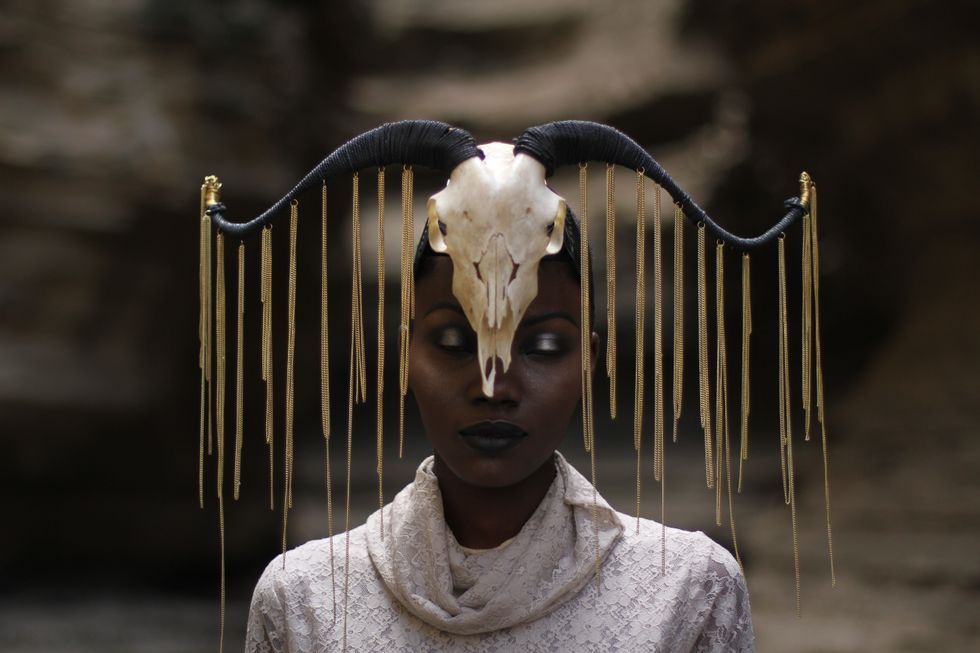 The Kenyan collective's short film program at Performa 17 is an emphasis on the strength of black presence.

"White people love Afrofuturism," says artist Patricia Kihoro, as she throws extension cords on top of her head in The Nest Collective's new short film, We Need Prayers: This One Went to Market.

In the film, which debuted at Performa 17 in New York this Sunday, Kihoro plays an artist who has resorted to "performing" African-ness in order to sell her work. Her original creative voice is silenced; in its place are the ideals of a capitalist, white supremacist art market, in which Afrofuturism is just one more reductive label used to flatten the complexity of black artists. As Kihoro poses with a telephone receiver across her eyes (to "see into the future"), her photographer protests. But Kihoro snaps back: If this photograph sells for $3,000, do you really care what the work means?

Silence is a powerful theme in The Nest Collective's short-film collection for Performa's AFROGLOSSIA film program. What happens when we black folk lose our voice—or refuse to use it? In This One Went to Market, Kihoro is in on the joke. She sails into art-world success by pandering to white people's clichés about Africa—isolation, conflict, and strife—and lands BuzzFeed worthy headlines like "Meet the African Artist Who Is Re-Examining Afrofuturism." But what has she lost in the process of selling her culture to market?

The film mirrors the scene from Get Out when one of the white bidders tells Daniel Kaluuya's Chris, "Black is in fashion." The aesthetic of the African diaspora is in high demand today—from the global influence of Lagos Fashion and Design Week to Marvel's anticipated cash out with Black Panther. And The Nest Collective—those arbiters of Kenyan cool—provide us with a lens to reconsider our own agency in making sure our culture and our voices are not appropriated.

This One Went to Market was commissioned for Performa 17, but it is a continuation of The Nest Collective's We Need Prayers: This One Stayed Home, which debuted earlier this summer. Here, a married couple awakens to their neighbors being robbed in Nairobi, Kenya. The film is funny and light, as the couple bicker about how to protect themselves best ("Let's post on Facebook: ANNOUNCEMENT, ANNOUNCEMENT, ANNOUNCEMENT!") while deciding early on that their neighbors are on their own. Using "Nairobbery" as the setting, This One Stayed Home reveals the way post-colonial forces—for example, a widening wage gap and poor infrastructure that have led to increased crime—have alienated us from each other.

But the most powerful short film is When We Are/When We Are Not (2016), a series of beautiful, silent shots of black bodies in repose. A man lying in a truck tire's tread; a woman in a lush, green forest; a hand hanging over the side of a bathtub with candles lit in the background. The film explores public black silence and stillness as it relates to methods of protest. It is especially relevant as Colin Kaepernick's silent protest against police brutality continues to polarize white and black populations. The mostly white owners thought banning Kaepernick from playing in the NFL would smolder his dissent; instead, its fanned the flames, inspiring a global movement.

When We Are/When We Are Not emphasizes this point: even when black bodies are still, our presence alone speaks volumes. If The Nest Collective is telling us anything, it's that our voices, whether figurative or literal, are more powerful than we realize.
From Your Site Articles
Popular
Popular
fashion