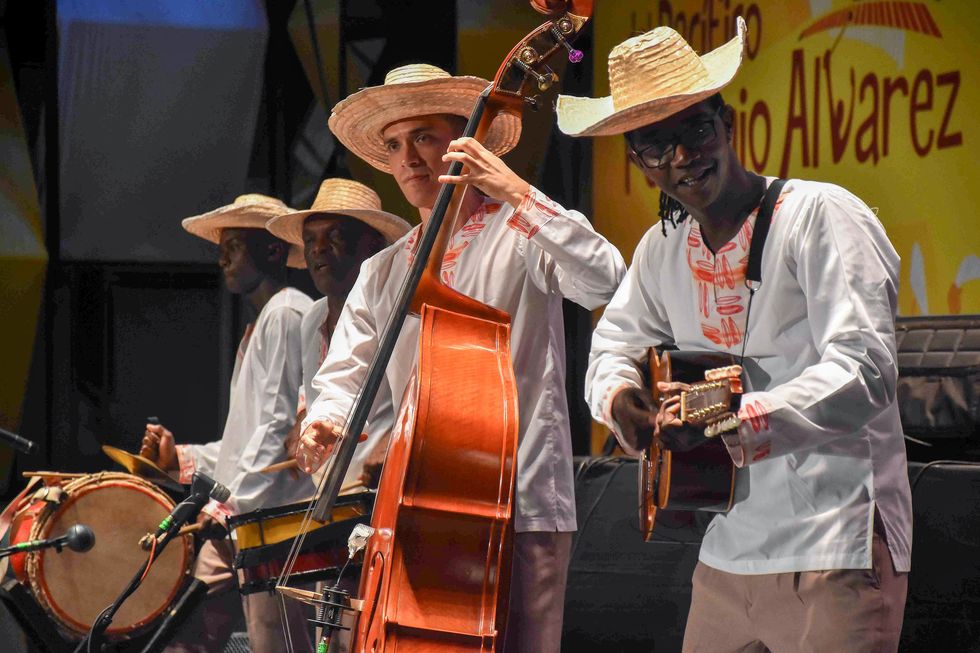 A look inside the Petronio Álvarez Festival—a five-day fete held in Cali, Colombia.

Every year in August, Cali—Colombia's third largest city—welcomes people from all over the world for the Petronio Álvarez Festival, a five-day feast of traditional music, dance, food, liquor and handicrafts from the country's Pacific coast. And, by doing so, it creates one of the few opportunities—and certainly the largest one—to celebrate the country's often overlooked blackness.

"The Pacific" is one of the five socio-economic regions in which Colombia is divided conceptually, only for simplification purposes. This region traverses parts of four Colombian departments along the country's western coast. It is one of Colombia's poorest areas, lacking infrastructure, as well as educational and job opportunities.

It is also the blackest region of the country. During colonial times, many African slaves were brought here to work on large plantations, mainly sugar cane. Many of them escaped before and after the abolishment of slavery in the country in 1851 into the thick, inaccessible landscapes near the Pacific ocean, and created their own settlements.

Since then, the Colombian state has mostly ignored these communities, and the whole region, of about one million people (90 percent of whom are black) is largely isolated from the rest of the country. There are practically no roads. People move from town to town either by speed boats on rivers, or by hooking their motorcycles to carts that go over abandoned railways.

The largest Colombian port in the Pacific, Buenaventura, is so badly connected that it has become a recurring theme among Colombian businesspeople to complain that is cheaper to bring merchandise from China to Buenaventura than it is to get it moved from Buenaventura to Bogotá.

What's more, drug-dealing gangs have taken advantage of this isolation to base their illegal businesses. Many illegal drug shipments from Colombia to the U.S. begin on lonely beaches in the Colombian Pacific.

But this centuries-old isolation has created a distinct Pacific identity, with music, food and art rooted in African traditions. The Petronio Álvarez Festival seeks to celebrate precisely this cultural heritage, by bringing people from all over the region together to celebrate the positive aspects of the area.

The region's isolation, however, means that, even though Cali is not technically in the Pacific region, since it is the nearest largest city, it makes more sense to held the festival there. Many black Pacific Colombians already live there, as they've moved to study or to find better job opportunities, and many of them host family members when they visit for the festival.

The Petronio Álvarez began as the initiative of local Cali politicians in 1996, in honor of the legendary Buenaventura musician of the same name. Since then, it has become a local institution, funded by the city and free to the public.

The festival main event is the musical competition that develops over its five days. Bands from all over the Pacific (and sometimes from other parts of Colombia) compete year-round for the right to showcase their music at the Petronio and to try to win one of the four categories there: marimba (a wooden percussive piano played mostly in the Cauca region), chirimía (a brass band most popular in the Chocó region), libre (for freestyle music inspired on traditional Pacific rhythms), and the recently added violines caucanos (or Cauca-style violins). There are also individual awards for best instrumentalists, and an award for best new song.

Bands compete in preliminary rounds and, if they are selected by the judges, play again in the next round, until there is a winner in every category. Each day, there are also national and international musical guests who entertain the crowd for free.

Some of the festival's winners go on to become international sensations (such as the case of Herencia de Timbiquí, who won the libre category in 2006 after trying for six straight years, and now regularly tour the United States and Europe), but most are bands of part-time musicians whose main aim is to showcase their music.

This musical competition is accompanied by hundreds of food stands operated by people bringing their cuisine from mostly small towns in the Pacific, which usually equates to some of the best seafood on Earth: fresh cazuelas, rich seafood rice, empanadas with shrimps or Pacific fish inside, all of them usually accompanied by flat, fried plantains called patacones.

More controversially, the festival is also a hotspot for the sale of artisanal Pacific liquors. These are usually made at family houses in the Pacific from the ever-present sugar canes of the region, and then bottled and brought in to Cali for the Petronio, with little sanitary oversight.

During the first editions of the festival, the attendees—who at that point were mainly from the Pacific—brought them from their hometowns to drink while enjoying the music. As people started to sell bottles during the celebrations (to the growing national and international crowds), the city decided to step in and to give accreditations to certain producers to sell the liquors during the festival.

But, despite the fact that there have been no incidents due to this lack of industrialization, some people have tried to push it into the ancestral drinks offered at the festival. For this year's edition, for example, a local Cali politician applied to sell his industrialized version of the main liquor offered—viche, basically distilled sugar cane—but was rejected, as the organizing committee wanted only artisanal products with an established tradition.

The politician, Diego Ramos Moncayo, sued the decision and tried to trademark the name viche. A Colombian court ruled against him, however, so the people at the festival could continue to enjoy the traditional, artisanal drinks—that, besides viche, included tomaseca, arrechón, siete catres, and other made from sugarcane and various spices, all promising to deliver aphrodisiac results—being sold for cheap every five meters.

This, of course, aids the massive choreographies that spontaneously emerge in the crowd, as well as the generally lively atmosphere throughout. But the drinks are not there just for the party—at the food stands, you can chat with some families that have been producing these sugar cane liquors for decades, and get a glimpse into their centuries-old traditions.

They are also a political statement, a message that, at least during the festival, the Pacific's ancestral traditions reign supreme. During Ramos' lawsuit, a campaign called "El viche se respeta" (or "Respect for Viche") emerged on social media, as a way to defend precisely those traditions. During the festival, Yuri Buenaventura—a salsa singer who was one of the special musical guests—echoed the campaign during his performance with a song dedicated to viche.

Because the Petronio festival is also political, any of the flags that waved during last year's general strike in the Pacific were on display here too. The music of the Petronio was the same that protesters played during that strike. And the same rallying cry heard in the streets of the Pacific last year was often repeated by crowds and artists alike during this year's festival: "¡El pueblo no se rinde, carajo!" ("The people won't surrender, goddamnit!").

Yet, after 22 years, the Petronio Álvarez Festival is a Cali institution, but it hasn't won everyone's hearts. Not many Colombians outside Cali and the Pacific know about the Petronio. And in Cali, many still see it as foreign. Some of the people I encountered this year complained that the city should spend the money on a festival with local music—such as salsa, after all, Cali's self-styled nickname is the world's salsa capital—and that the Petronio should find a home in the Pacific. But this is not just a musical complaint. Many in the city disregard its black population, and see them still as immigrants, despite many of them having lived in Cali for generations.

Politicians, however, can see its potential. This year, Cali's mayor, Maurice Armitage, was on stage a few times, praising the importance of Pacific culture in his city. Colombia's new president, Iván Duque, made a stop at the festival too, but he didn't dare to face the concert crowds—he lost the elections in almost all the towns of the Pacific.

With a growing flow of foreign tourists coming to Cali for this feast, the festival's future is safe. But will it still be the same celebration of black Pacific Colombians and their culture? And will it conquer the hearts of the people of its city? If the enthusiasm of the regular attendees that have turned it into the success that it is today continues, the answer to both questions will likely be yes.