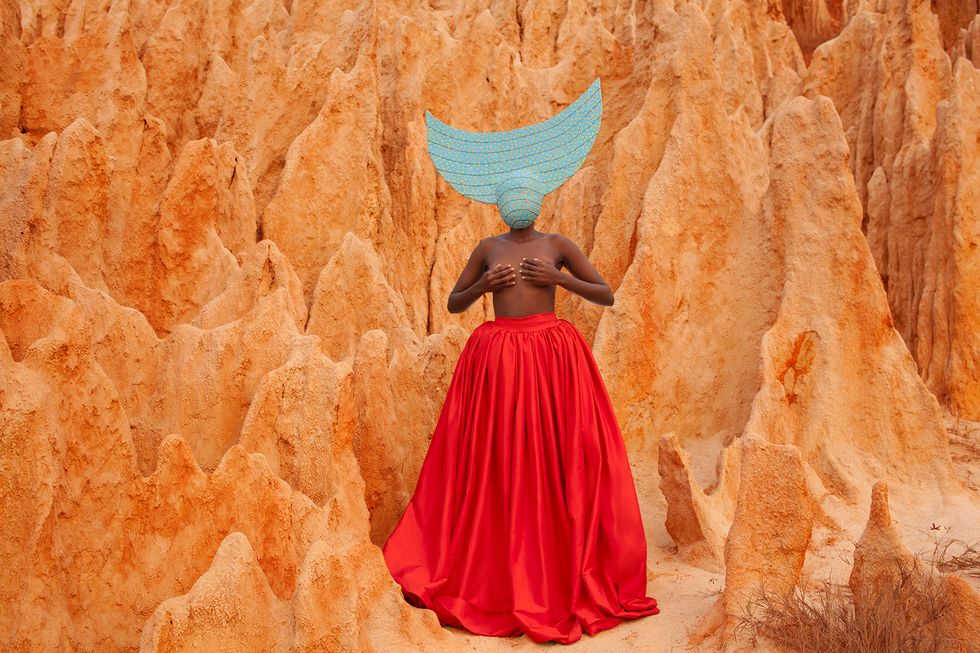 "Refraction: New Photography of Africa and Its Diaspora" opens at Steven Kasher Gallery April 19 in NYC.

Refraction: New Photography of Africa and Its Diaspora is a photo exhibition that will present a generation of photographic artists of African descent born in the 1970s through the 1990s. Premiering on Thursday, April 19 at Steven Kasher Gallery in NYC, these 12 artists, who reside from all over the world, portray black bodies in acts of cultural meditation, revive the traditional African rites of masking, costuming, quilting, body ornamentation and invocation of spirits, through their work.

"They refract those rituals through the lenses of contemporary art practices such as performative self-portraiture, collage, montage and digital manipulation," the Gallery's press release states. "They merge cultures past and present, looking towards a more inclusive, harmonious future."

Cultural anthropologist and independent curator Niama Safia Sandy co-curated Refraction with Steven Kasher Gallery director Cassandra Johnson. Sandy says the aspect of the exhibit's name, "new photography of Africa and its diaspora," was intentional, as they wanted to authentically include the African diaspora when one hears of it in the art market, especially.

"We could say 'black' because that's what it is, but it's really about showing these many facets of blackness and the way that identity is influenced across all these different geographical boundaries," Sandy says. "Whether it's because of [black] people being stolen, even despite all of that, we're all connected and we're all facing similar issues at this moment."

The works curated for Refraction are meant to bridge the gap between black stereotypes and black reality. The photos maneuver the complex relationship between innate identities and identities that have grown from social, political and cultural influences. "On a technical level, these artists are heralds of new dimensions and photography, bending, transmuting and pushing the medium," the Gallery says.

The photographs in this exhibit range from Afro-futurism and Afro-documentary, as they reclaim and re-connect a multitude of black histories and identities.

Refraction runs from April 19 and concludes on June 2 with an artist talk. Sandy also highlights four artists in the exhibit you can't miss. Take a look below.

"Her work of late has been phenomenal. Your jaw will drop on the floor when you see it person. Her approach to her practice at the moment is really a good encapsulation of thinking about how nationalistic identities, ethnographic identities and more combine to present black people as they are now. Her parents are from Equatorial Guinea and Sierra Leone respectively, she grew up in Brooklyn; exposed to lots of different people from the diaspora. These ideas are very much present in her work."

"His family is partially from Barbados, and through his practice, he's exploring the idea of what we would be like if not all of us were taken across the Atlantic on slave ships. He asks, 'What if we've been here for quite some time?" He's done an extensive amount of research on how indigenous peoples were described in texts written in the 16th, 17th and 18th centuries, and they're almost all described as being very, very dark people. What if we could imagine, via an image, people who have existed in this very cosmopolitan state, but are very black, dark and have features that look like yours or mine, and people who are dressed in an opulent way but are also clearly black?"

"The Birth of Enkidu" by Ivan Forde. Image courtesy of Steven Kasher Gallery.

"I'm kind of obsessed with Ivan—he's incredible. Instead of utilizing the regular photograph approach, he uses cyanotype, which is a chemical process wherein you're exposing an object with sunlight, versus the traditional approach of how the lens captures images on film or digitally. His hands are literally more involved in his practice, as well as his body. It's a much more time consuming process with cyanotype, as well as his silkscreen process. He creates these tapestries of a character called Enkidu from the epic poem of Gilgamesh. He's, in his own words, trying to breach temporal, geographical and other boundaries. It's very much a performative work. Cyanotype is a very specific blue, and for me, I think about how people would make fun of very dark people as 'blue black,' and how we fit into a creation myth and breakout whatever has been taught to us at this point about who we are, who we've been and where we've been—how do you actually create new stories around that?"

"Émilie is a Canadian-Haitian photographer who lives in Paris at the moment. In her series, Leopard, she's again trying to mess with those tropes that people have placed upon Africa in terms of what they expect to see and the narratives that they expect to be explored. She creates these images in her series that you wouldn't expect when one thinks, 'How would leopard appear on the continent? What would someone be wearing that's not a loincloth?' People are wearing different variations of it, but they're regular people, going about their day or in their home or dressed to go out. She's giving a face to regular people. The woman photographed is looking straight at the camera with beautiful skin—a wonderful encapsulation of who she is without us mentioning her economic or social status."