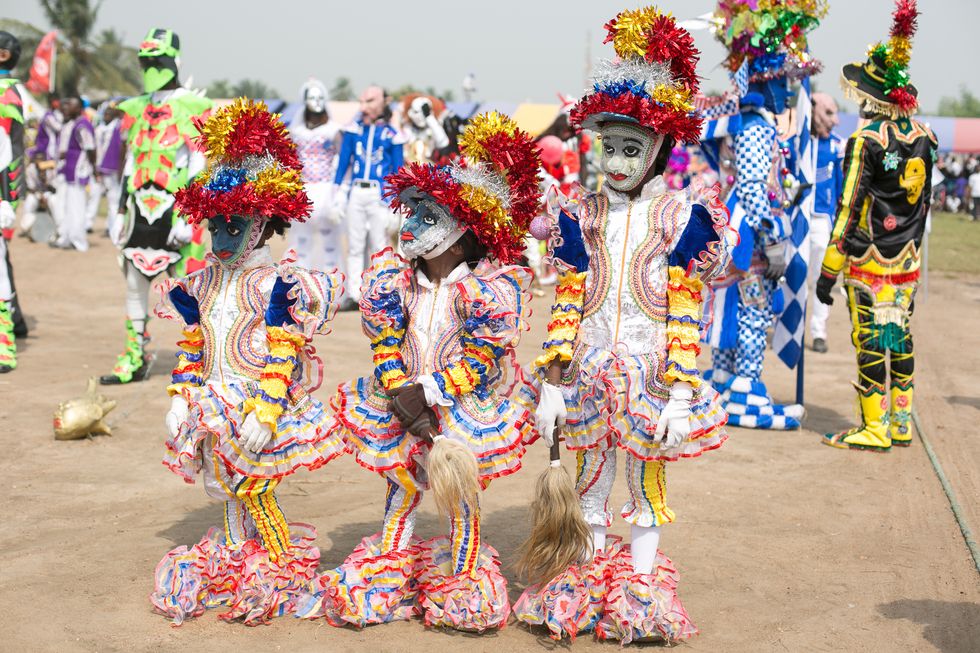 This photo story shows the annual celebration of sheer ingenuity and living history.

Where would you see Mortal Kombat characters, Black Jesus, Donald Trump, members of a royal wedding party and cowboys wielding Supreme cash guns in one place at the same time? At the start of the year in Winneba, a town in the central region of Ghana, these characters and more draped the coastal town in iridescent color for the Winneba Fancy Dress Festival.

The annual masquerade festival is a celebration of sheer ingenuity and living history. The tradition of masquerading emerged from contact with Dutch colonizers who introduced putting on masks and wearing fanciful attires to socialize in many coastal towns in Ghana. The people of Winneba adopted and owned this practice by setting up various masquerade troupes—as far back as the 1930s—to create elaborate characters and perform with marching bands for their townsfolk. In 1957, the institution was formalized by Ghana's first president, Dr. Kwame Nkrumah, who sponsored the first parade to mark Ghana's independence. The 60th edition of the festival was spread over an entire week and comprises, exhibitions, panel discussion, tours, various marching floats, all of which culminated into the final parade on new year's day where the four troupes competed for a trophy.

This fervent competition fuels the creativity that holds the festival together as the entire town is split along these troupe lines, with each one attempting to outwit the other with the most bizarre and riveting costumes, stunts, songs and dances. The masquerades borrow heavily from colonial culture by dressing up as some institutions of colonial power from police, cowboys, pastors to garden parties, and other figures that were prominent in that era. There is a deliberate attempt to completely embody this eurocentric appearance, such that every layer of exposed skin is cover with white fabric with straighten hair wigs for both men and women. However, costumes are not limited by colonial history and many reference several personalities from pop culture such as Lebron James and Trump. One particular group paid homage to Ebony, a Ghanaian woman and musician, whose meteoric rise has caused a rethinking of roles women play in the local music scene.

The costumes are engineered to provoke visceral reactions, be it fear, anxiety, or laughter through the exaggerate features. Traditionally, the festival was reserved for men, which meant that a number of them engaged in cross dressing, which is seen as taboo in most Ghanaian community, in order to accurately depict women characters. Today, women are allowed to participate in the festival, yet most of the male participants still put on wigs, earrings, frocks and gowns to become women.

The festival stands out from most masquerade festival on the continent not just because of the long and intriguing history that binds it, but primary due to its constantly evolving visual culture. Participants do not limit their imagination to the tradition that birthed their beloved festival, but look to themselves and their socio-political conditions that permeate society for inspiration for their costumes. As such each year, there will be something new that not only captivates the audience but also doubles as a subtle metaphor for whatever sentiments that dominated the narrative from the past year. The redesigning of predominant images by the masquerades weaponizes their performances to become a tool for imaginative thinking. In a way, the festival is a living museum—it reminds us of the past as well as catalyzing conversation on the conditions of the present.