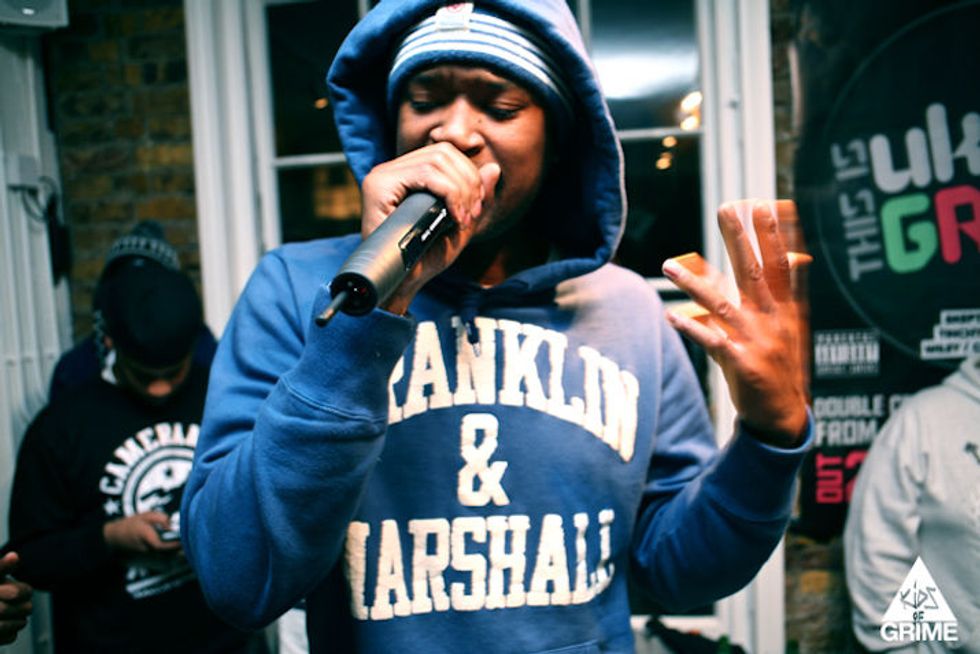 'Pirate Mentality,' a new two-part documentary about how pirate radio put grime on the map,

Pirate Mentality is a two-part documentary presented and produced by Frisco, a prominent member of the Boy Better Know collective which includes Skepta and his brother JME amongst others, and whose own latest album System Killer was released in April of last year.

Frisco’s idea for the doc was to recreate a pirate radio set at the old Rhythm Division address, once a spiritual home (which has since been gentrified), and to do so, he enlists Risky Roadz, a pioneer of grime DVD series and now a black cab driver.

Held at what is now called Zealand Coffee on Roman Road in East London, the old Rhythm Division previously hosted open mic cyphers—a crucible that served as a haven for upstarts out to prove their mettle.

MCs passing a mic amongst each other as they rhyme is nothing out of the ordinary,  yet the ciphers are absolutely bewitching to watch. As if to further tighten the already tight focus required for the art of MCing, a camera purposefully attached to the base of the mic, captures everything from the MC’s faces to their nostrils, and heightens the intensity.

The is reenactment as distillation—or simply re-distillation—which should make for a purer form.

“Grime wasn't meant to have its time... until now” said Frisco, “a lot of people didn't understand the British culture: the way we speak, the way we dress, you get what I am saying, the music we make."

He's referring specifically to black British youth culture, vibrant and innovative, and a true show of musical genius that is often reduced to simply being from the Isles by larger, dominant populations.

Being invited to spit on pirate radio stations was once like being drafted into a higher league, “when you're young, it felt like you'd made it” said Tinchy Stryder, “It was wrong but not illegal." He goes on to tell of how he once got bitten by a dog while on the mic only to resume his set, after treatment, undeterred by pain or risk of infection.

Kano, one of the most versatile and articulate MCs I've heard, whose album Made In The Manor garnered a Mercury  Awards nomination (which Skepta’s Konnichiwa eventually won), insists “I never went a day without writing lyrics... everyday in a yellow rough book, lyrics lyrics lyrics... trying to get a wheel up."

Ghetts, of the trademark whirlwind and impassioned delivery which could scare the uninitiated, recalls the nights he spent listening to Heartless Crew on pirate radio and appears convinced that he wouldn't be the MC he is today without them. He'll be performing the entirety of his seminal 2014 album Ghetto Gospel as part of In The Round at Roundhouse in London come January 30.

Frisco and Risky Roadz go even further back to the earliest days of grime by interviewing Geeneus who, twenty-two years ago, founded Rinse FM, the first pirate radio station and from whom we learn (or are reminded) of the first crews to dominated the scene (Pay As You Go, Heartless Crew and So Solid), and the maneuvering that went into broadcasting from an illegal radio station in the mid-90s.

Rather than revel in grime’s new-found reach—due, in part, to very helpful co-signs from artists like Drake—the aim of the set at Roman Road, and the documentary as a whole, is to boil the genre down to its essence: the faithful triumvirate of a “deck, mixer, mic.”

Chip, whose Power Up EP was released in August of last year, came close to dismissing his own hits, when he affirmed his belief in the elementalism of Frisco’s project by adding “no Every Girl, no Champion, Oopsy Daisy. Decks, mixer, mic, go."

As you were, Chip.

Watch Pirate Mentality in its entirety via UK's Channel 4.