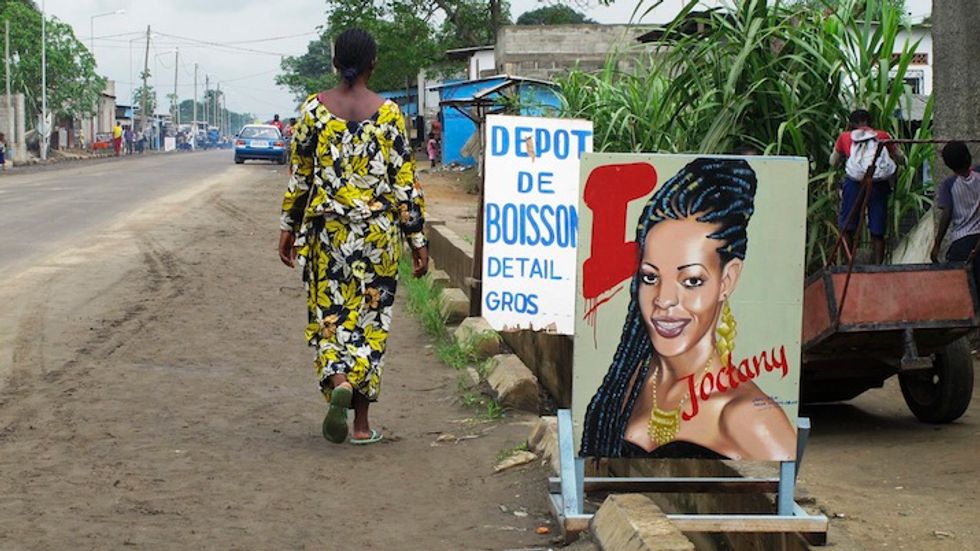 As a refugee, one never quite fits. Somehow there’s always some indefinable thing that sets us apart, as I learnt in my 10 years as a refugee living in South Africa. When I returned to my home country of Congo Brazzaville, though, I didn’t quite fit either, and the most often cited reason was my hair.

Shortly after my arrival I noticed the fascination my little sister and niece had with fake hair and skin lightening creams. When I went to any government agency, I was told to leave or go outside, as my hair (naturally curly afro) was unacceptable. I would be allowed to ask questions and do business once I had shaved or styled it. I quickly learned that here, in Pointe-Noire, my clothes weren’t formal enough, my shoes not shiny enough, and my hair definitely too wild. Appearances, I learned, were more important than reality.

After falling in love with photography a few years ago I decided to take my camera to the streets, to process this phenomena for myself. In certain suburbs of Pointe-Noire, there are hair salons every 100 metres, offering everything from hair cuts and fake extensions, to skin lightening, nail treatments and even wedding car decoration. I made the hand-painted boards advertising the services of these ‘salon de coiffure’ (French for hair salons) the subject of my photographs, and I started noticing an interesting trend in my frames. Few of the people on the street actually looked like the pictures on the boards. What Congolese aspired to in the beauty stakes was not in fact what they looked like.

The models on the boards, I noticed, were generally light skinned women and men. The women were all wearing fake and straight hair styles, and very few traditional styles were featured. The look of American pop artists seemed to be the desired standard. I took thousands of photographs over the course of about three months, and noticed that the younger girls were more likely to have fake hair and extensions, as well as the people with higher economic status.

The thing that struck me the most though, was that the people in my photographs, who did not conform to the look on the boards, were beautiful nevertheless. Women walked as if they were on a catwalk, wearing traditional pagne (African cloth) and intricately designed natural hair. There was an innocence and simplicity to the style of dress, and a definite sense of fashion and self-expression. I fell in love with these people, and with the defiance and regality in their gazes and carriage.

I can only assume that increased exposure to Western ideals and media and negative feedback from authority figures, has led the Congolese to desire and invent a cultural ideal of beauty which is in fact a negation of self. No longer is it our race which causes us to doubt our worth. It is something much more subtle now-- a slow, insidiously growing belief that perhaps to be as we are is not enough.

Through my photographs, I hope to show the beauty and grace of all the women, men and children, who in their daily lives, have not yet succumbed to the pictures held up for them to aspire to.

Follow Robert Nzaou-Kissolo over at his blog, Pointe Noire In Full Colour.