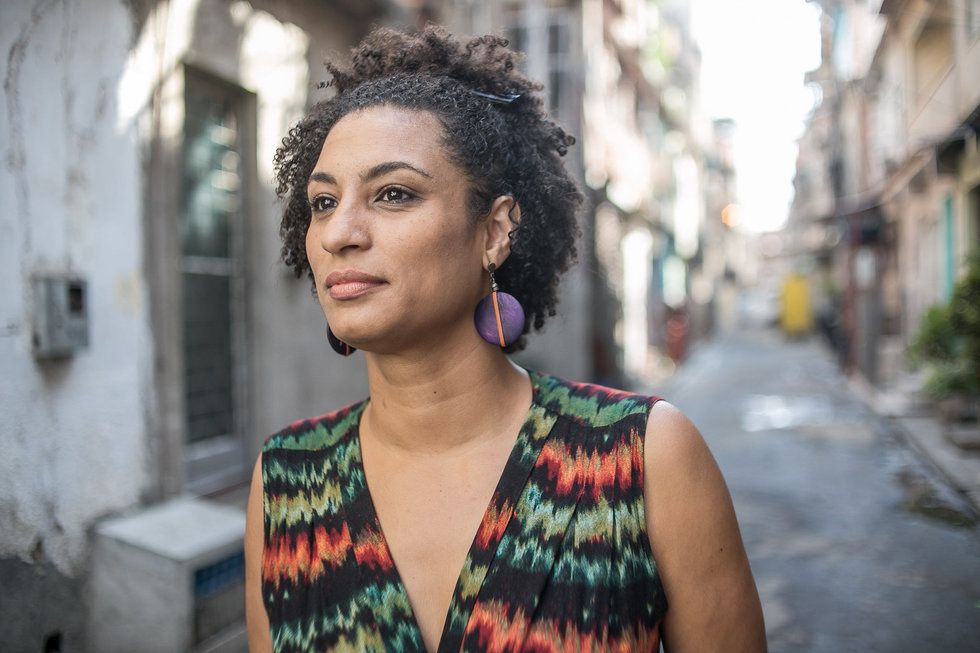 Both suspects have been linked to Brazil's far-right president Jair Bolsonaro.

Authorities in Brazil are one step closer to brining the men responsible for the killing of Afro-Brazilian councilwoman Marielle Franco, in March of last year, to justice The Intercept reports.

According to a police report obtained by the publication, six witnesses gave statements identifying an ex-officer—who was previously expelled from the city's Military Police Force after it was found that he had ties to one of Rio's largest organized crime groups—as one of the men responsible for the death of Franco and her driver Anderson Gomes.

After being withheld by investigators for months, the main suspects' names were released on Tuesday. Adriano Magalhães da Nóbregais isbelieved to be a hired assassin and the leader of the Office of Crime for a militia that controls the Rio das Pedras neighborhood in Rio de Janeiro. He remains at large, according to Broadly.

Ronald Paulo Alves Pereira, another Military Police Officer and militia commander has been arrested in connection to the murder, according to a report from Brazilian publication G1, which shared photos of Pereira being taken into custody on Tuesday.

READ: A Black Woman In Power

Special units executed arrest warrants for 13 men on Tuesday related to their involvement in organized crime—five of this listed were suspected of aiding in the assassination.

Both Nóbrega and Pereira are said to have ties to Brazil's current far-right president President Jair Bolsonaro, through his oldest son senator-elect Flávio Bolsonaro, who has strongly denied any involvement. "I cannot be held accountable for the behavior of someone I do not know, whose actions have only been reported now by this organization," he wrote in a statement shared on Twitter. However, both Nóbrega and Pereira were given the State Assembly's highest honor in 2003 and 2004, respectively, under nomination from Flávio Bolsonaro.

Last May, security minister Raul Jungmann, confirmed reports that a councilman and a member of one of Rio's underground militias were prime suspects in the killings.

"The Marielle Franco case is indeed close to an ending,"Blavityquotes Rio's Governor Wilson Witzel as saying. "I can't legally look at the documents, which are sealed. But the information that I have is that the [arrest] of the criminals involved could happen still in January."

Despite, what appears like, a dedication to nailing the perpetrators on Witzel's part, the governor's motives have been brought into question, as noted in The Intercept. Last year he was photographed standing on stage with two candidates who had proudly broken a street sign honoring Franco in half.

Franco, who dedicated her life to fighting for black people in the city's favelas and members of the LGBTQ community, will be honored by one of Rio's foremost Samba Schools at Brazil's carnival this year.