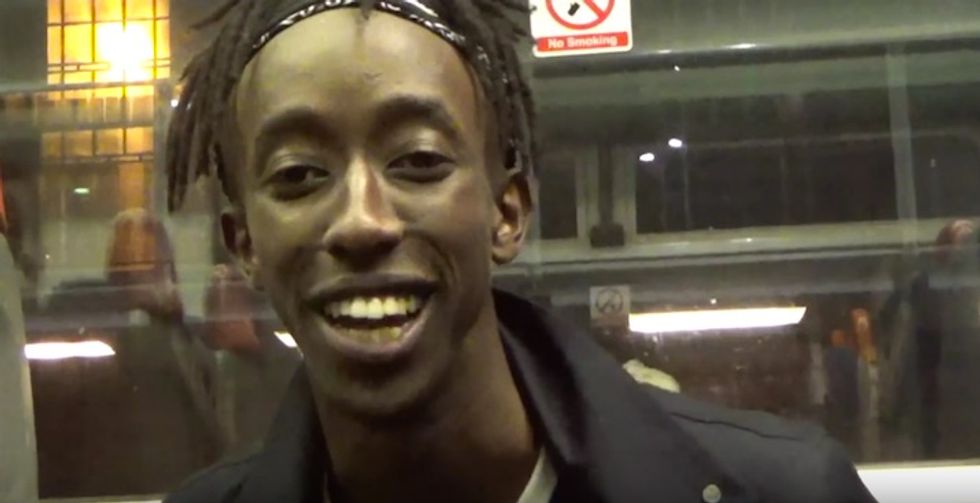 Polyglot is a scripted web series from Rwandan-German visual artist and self-taught filmmaker Amelia Umuhire that explores the multi-hyphenate identities of young creatives of color in Berlin. In the show’s first and second episodes, we’re introduced to Babiche Papaya, a rapper, poet, playwright and actress played by Umuhire’s sister, Amanda Mukasonga.

Episode three of the series takes us to London, where we meet 21-year-old filmmaker Roger Jean Nsengiyumva, who has just received a disappointing phone call alerting him of a failed job interview due to a minor offense from when he was sixteen. The episode follows Roger as he revisits recent memories with his “German sis” Amanda–including a freestyle session with Afrikan Boy–and the lonely night he has after the phone call.

According to Umuhire, the episode is about trying to find a refuge from the outside world through creating art and expressing oneself. “In Europe and in the UK there has been a hysterical debate, or more accurate- a political and medial campaign to create fear of refugees and migrants coming to Europe,” the filmmaker says. “Refugees are not only alienated through the structural discrimination but also through misrepresentation through the press. So in the montage at the beginning, I played with the tone of the news lately and tried to abstract this noise and mock it a little by exaggerating the stylistic devices of news.”

Umuhire says that by mixing cameras and points of view, the series is attempting to “show the subjectivity of images and the discrepancy between self-perception and our depiction through media.” One of the few images of Trayvon Martin that was released after his death showed him from the perspective of the store surveillance cameras, she explains. “A young black or brown man is considered a threat and seen through the eyes of surveillance cameras, so clearly you put the viewer in a powerful position and the person becomes an object, a projection screen for your fears and fantasies.”

“But we now have the power to reverse roles and hold the cameras and decide how we want to be depicted. So that line where Amanda and Roger are saying that the cameras are like weapons, there is truth to it. We can fight back through them.”

Watch the premiere of Polyglot Episode 3, “My Own,” below. For more, keep up with the series on Facebook and Instagram.