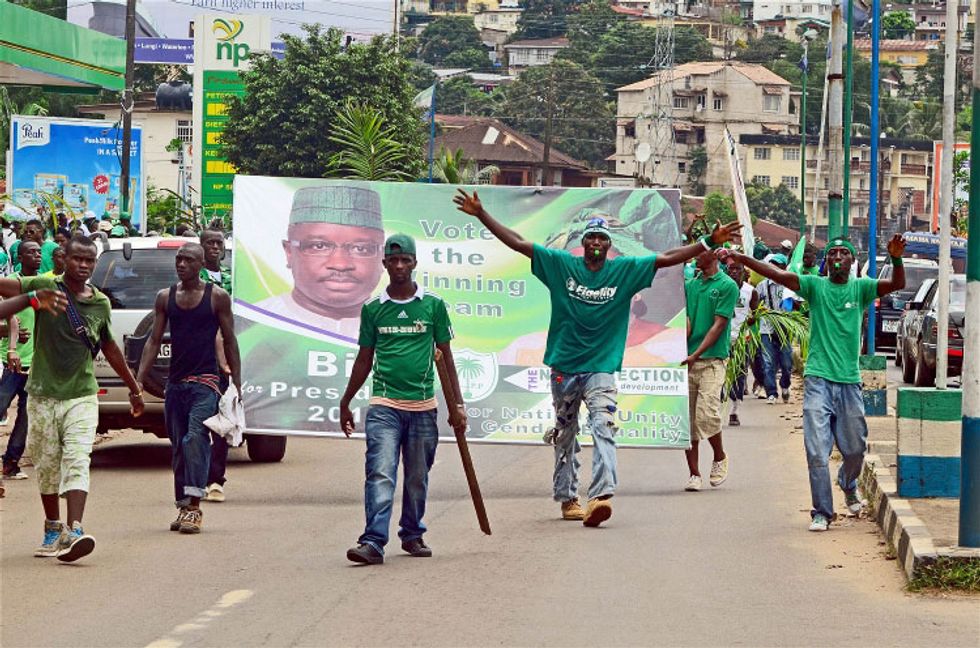 Here is a guide to the Sierra Leone Election.

Who: Incumbent Ernest Koroma of the All People's Congress (APC); Julius Maada Bio of the Sierra Leone People's Party (SLPP)

The Issues for the Sierra Leone Election:

Infrastructure and living standards -People are calling for better infrastructure and quality of life. President Koromo has an advantage as the incumbent: during his first term he built new roads in Freetown and beyond, and completed the first stage on a long-delayed hydropower dam.

Women's rights and representation - Women's groups across the country have been calling for increased political representation in the form of a quota that would guarantee 30% of seats to women candidates. If the opposition comes to power then Kadi Sesay will become the first woman Vice President in the country's democratic history.

Corruption - President Koroma came to power promising to fight corruption but nobody has been convicted.

Natural resources - There's been a huge mining boom raising the question of who will benefit from the country's natural resources. A controversial Aljazeeradocumentary spearheaded by journalist Sorious Samura suggested that timber was an equally profitable and exploited as the gold and diamond mines.

The Word about the Sierra Leone Election:

"We are expecting development for the country, like good roads, jobs, light. Now this country is a peaceful country, we don't want no fighting no more." - Henry Tommy, 35, self-employed stone mason

"Women have been terrified by senior male authorities in some constituencies in past elections, and in the end those women have had to step down for fear of their lives. This new system, if actualised, will ensure women's security and safety to exercise their franchise." - Hannah Koroma, Women Against Violence and Exploitation in Society (Waves).

"Peaceful elections resulting in a credible outcome are critical for consolidating Sierra Leone's hard-won peace," said Ban in the statement, adding praise for the cooperation of political parties and other stakeholders who signed a May 2102 declaration committing themselves to fair and free elections." - Ban Ki Moon, United Nations Secretary General

In anticipation of tomorrow's election, Sierra Leonian superstars Bajah and the Dry Eye Crew released this video for "Give Peace a Chance." A song from their upcoming album Cotton Tree. The song and video are intended for Sierra Leonian people and it aims to promote peace amid rising tensions leading up to the election.