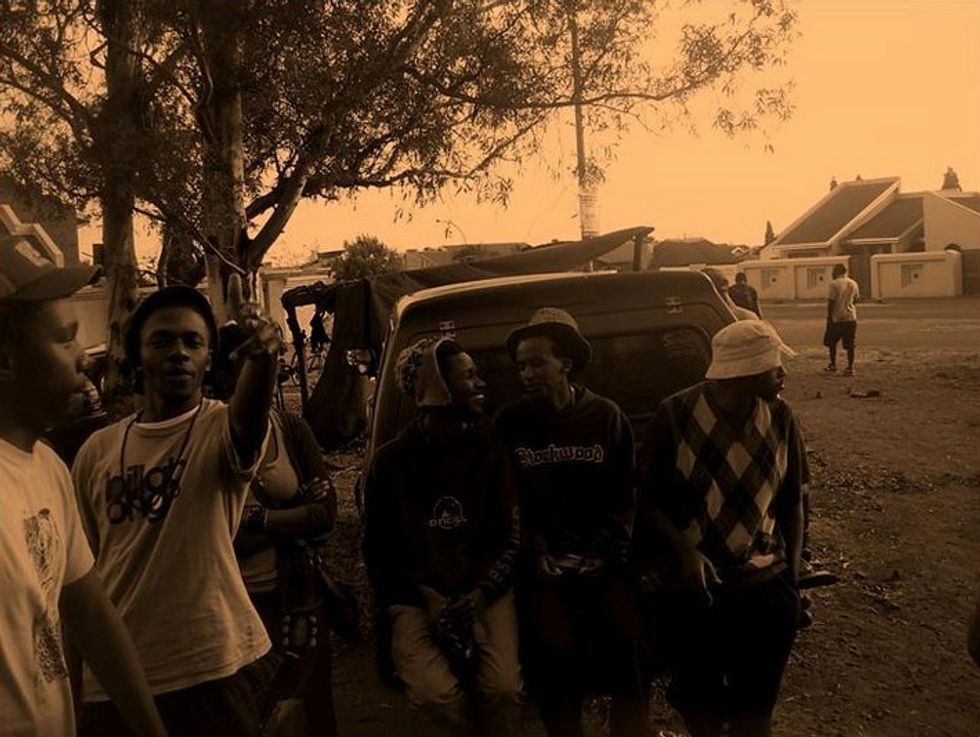 The New York prog-rap movement of the late nineties found a new home in Pretoria.

Ideas have the incredible ability to resurrect themselves in foreign contexts. The New York prog-rap movement of the late nineties managed to capture the attention of a select group of discerning heads for a brief moment then briskly evaporated into oblivion when philosophical rap fell out of vogue with its nerdy suburban following. That’s an all too common narrative in our bullet-paced age; modern sub-genres have the life-expectancy of plankton and are equally as copious; multiplying at viral velocity; leaving us hardly any prefixes left to classify them all. Music genres used to be indelible inherited monuments patiently waiting to be discovered by the listener. Now they haphazardly float past our ears like densely scattered sonic bubbles, each popping soon after it’s noticed. Such was the dreaded fate of the prog-rap genre, with only a few of its last apostles like Aesop Rock, Busdriver and Death Grips keeping its flickering torch lit today.

Yet quite unbeknownst to the martyrs of this short-lived cause, a potent seed had been sown on distant soil. It all started in Brooklyn, New York, the birthplace of Definitive Jux, a prog-rap label founded in 1999 by producer/rapper El-P. It housed a fellowship of hip-hop pioneers including Aesop Rock, Big Jus, Cannibal Ox, Atoms Fam and Company Flow. They sought to provide a more figurative voice for the urban music of their generation. They incorporated elements of prose and academia with street slang and ghetto bravado... the result was radioactive. Aesop Rock became hip hop’s T.S. Elliot, unabashedly conveying the moral toxicity of industrial progress. Big Jus became our Karl Marx, debunking the intrinsically exploitative nature of the capitalist system. Their music was a much needed counterweight to the club-rap which came to dominate the era. Which is precisely why when this brand of hip-hop reached its point of extinction, it left a noticeable vacuum. As a universal law of physics: Energy never dies, it’s only transferred... and this energy would be transferred to the most remotely obscure of destinations: Pretoria, South Africa.

The climate of South African hip-hop early to mid 2000’s was one intoxicated by a general preoccupation with battle raps. The majority of local emcees would astound the audience with content that was nothing more than a collage of punch lines stitched together with a-b-a-b rhyme schemes. The lesser evil was the black consciousness hip-hop of the time, most of which was delivered in a prosaic and unimaginative fashion– that was what was deemed as the revolutionary rap of the time. Pretoria was a distinguished arena for both styles with the Sammy Marks’ Square ciphers being the epicentre and forum for many unsung heroes in the scene as well as some sung ones, including Mycbeth (The Anvils), Tumi (from Tumi and the Volume) and Disco Izreal (PHFat, Sedge Warbler). The only problem was that the city hadn’t developed its own signature sound. Joburg hip-hop was recognisable from a mile away, as was Cape Town’s. Pretorian emcees, though, blended into the background with no unique quality or style to set them apart from the swarm.

This all changed when the PTA prog-rap movement was born, when acts like Audio-Flux Modulation and Dynamic Shapeshifterz emerged onto the scene glistening with a refreshing new aesthetic. They rapped on time, stretched arrhythmic jazz loops and touched on virgin subject matter from post-colonial ails to theoretical physics. They portrayed their concepts with a new non-representational method. The subtext was now carefully veiled behind the rhetoric, profound treasure buried deep beneath the surface as if to mask it from those unworthy of its beauty. This new army of artists armed with camouflaged truths represented a tectonic shift in the urban African psyche. The focus now was to construct a new methodology; a new encrypted language in which to document African history; one more based on imagery than syntax; like a verbalised version of hieroglyphics. Their verses should form the syllabi that the next generation of young South African intellectuals could rely on to discern the real story behind the 'Rainbow Nation’ fairytale.

But alas, the chances are the vast majority of them will never be signed and their music will never reach its predestined audience. Like their American predecessors, their greatest possible prospect is to have their subversive genius embraced in eccentric locations like Europe and Japan. The two movements would become like soul mates doomed never to meet– parallel lines constrained from ever converging. Both movements seem to have been born out of wedlock and out of sync with their societies. They both preferred to live in the abstract rather than the tangible, detaching themselves from reality in order to become its objective lyrical narrators. The funny thing is, although both movements were always perversely undervalued and misunderstood by their local audiences, I can’t help but believe that if they somehow had found each other... that would be all the applause they’d ever need.