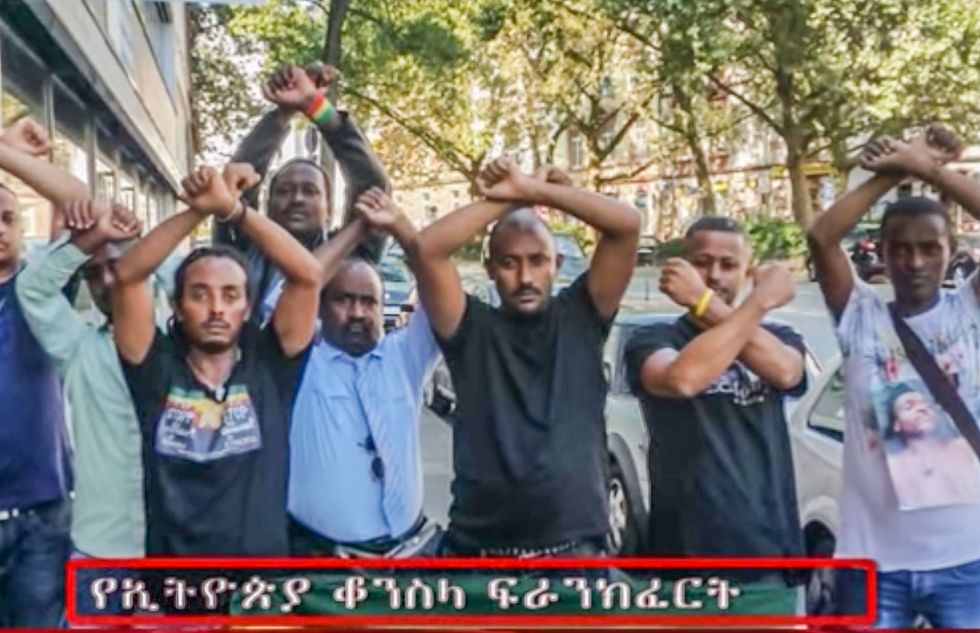 Were these protests coordinated?

An Oromo activist posted a video on Facebook showing a small group of protesters entering the Ethiopian embassy in London.

An exchange of words in Amharic between the protesters and the embassy officials can be heard. One of the protesters is seen overturning a portrait of late Ethiopian Prime Minister Meles Zenawi, while another kicks it. Then, someone else stands on a table to cloak the current Ethiopian flag, adopted in 1996, over an older version, part of a string of flags suspended from the ceiling.

An embassy official confronts them, saying, according to the BBC,  "This is illegal" and "You can provide your requests but it should not be like this. It should be peaceful."

The protesters' responses run the gamut from "This is not illegal. It is an Ethiopian flag. We won’t damage anything. People are dying for this flag” to “You burn our compatriots like a torch. We came here to demand their blood.”

Meanwhile at the embassy in Stockholm, protesters have been heard shouting, “You are Nazis.”

Ethiopian TV channel Esat has posted footage of protesters barging into the embassy there. The video also features images of police talking to the protesters in London, which suggests these protests may have been coordinated.

This continues a string of protests and political statements representing the anti-government movement gaining momentum in Ethiopia in response to ongoing discrimination and land seizures of the Oromo people, Ethiopia’s largest ethnic group.