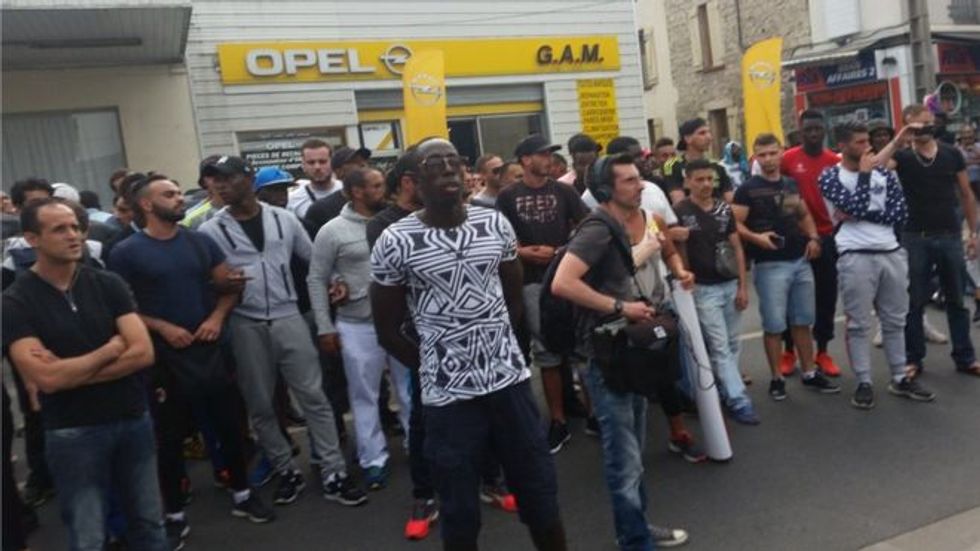 “We know if things don't burn nothing will come of it, that is how we feel.”

France is looking a lot like the U.S. right now with protests for a third straight night after a young black Muslim man died in police custody.

Similarly to Sandra Bland, a 28-year-old black woman who was found hanging in a Waller County, Texas jail a year ago after being detained for a routine traffic stop, and 25-year-old Freddie Gray, who was arrested for illegal possession of a switchblade whose spinal cord was severed while being transported in a police van in Baltimore, Maryland—Adama Traore died while police drove him to a station Tuesday night in Beaumont-sur-Oise, north of Paris, Telesur reports.

He was arrested for allegedly interfering with the arrest of his brother-in-law who was involved in an extortion case. This sounds very much like Jasmine Richards, a Black Lives Matter protester, who as of last month faced four-years in prison after she was convicted of a rarely used statute in California called “felony lynching” for attempting to “de-arrest” someone during a peaceful protest. The charges against Richards were later dropped.

There are conflicting reports on how Traore, who had just turned 24 years old on Tuesday, died. According to Telesur, police say he died because of a “very serious infection” while the BBC  and AJ+ report Traore suffered a heart attack.

Local prosecutor Yves Jannier says Traore "fainted during the ride" to the police station and paramedics were unable to revive him, according to the BBC.

However it happened, the young man’s life has been cut short, and his family and friends are demanding answers as they say Traore was healthy. They suspect he may have been beaten to death by police.

Traore’s brother Baguy tells Le Parisien that when he arrived at the police station he saw him lying on the floor. A police officer with blood on his shirt reportedly told Baguy that Traore was “pretending.”

In response to the young man’s untimely death, there have been ongoing clashes between police dressed in riot gear and protesters. There have been reports of police injuries and arson of a dozen or more vehicles and several public buildings. Protesters have been chanting, “No justice. No peace,” which has become a popular tagline when confronting police brutality.

"We know it is going to be covered up. We know if things don't burn nothing will come of it, that is how we feel," a 24-year-old who took part in the disturbances tells BBC.

According to the AJ+ video that you can watch below, there has been criticism that the French media has fixated more on the riots that have taken place this week, than on the death of Traore.

This young man’s tragic demise is yet another example that the struggle for justice, police brutality and recognition that black lives matter is indeed a worldwide phenomenon.

Watch the AJ+ video below to learn more about the riots taking place in France.