At Pussy Party, There’s No Room to Be a Dick 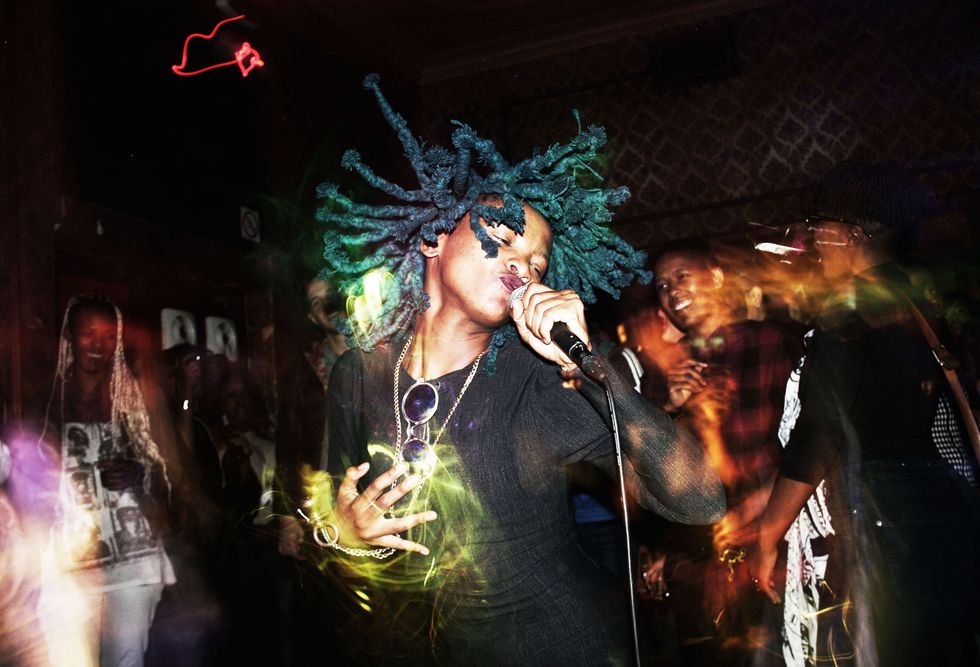 Pussy Party is Johannesburg's progressive, femme-friendly monthly party. We caught up with the founders.

A couple of years ago, I was convinced that a night out with the fellas was the epitome of a good time. That being the only woman in a group of guys was less taxing than, say, a drama-filled girls' night out. I felt safer and more comfortable around the fellas, like they’d offer some sort of protection from the nasty creeps who frequent the watering holes of Braamfontein (I was wrong in so many ways).

I’d call myself “the only pussy at a penis party,” much to the annoyance of my male friends. They’d tell me to stop calling myself that. That it’s “vulgar.” As problematic as my thinking was, at the time, I felt I was claiming the power in my femininity.

There’s power in the word “pussy,” especially in a world where everything is literally a penis parade. Fortunately, I’m not the only one who thinks so. Phatstoki and Rosie Parade are the organisers of Pussy Party, a progressive femme-friendly event in Johannesburg that hopes to carve out a safe space where women and femmes can express and celebrate their femininity in whichever way they want. And oh yeah, they’re both kick-ass DJs.

“I didn’t realise the level of panic the word pussy would inspire,” Rosie Parade mentioned when we sat down at a sushi bar across the street from Kitchener’s, where Pussy Party is held the second Wednesday of every month. “But WHY?!?!” I asked indignantly. She has a theory: “When guys say pussy they’re talking heavy shit, they’re being like ‘That bitch pussy stink or I drilled a hole in that pussy hard.’” “They oversexualise the word,” Phatstoki chimed in. “At any point you take ownership of something they use to disempower you, then it becomes a problem.”

The Pussy Party founders are re-appropriating the word, taking back its power from those who want to use it to shame and disrespect us.

We’re living in the middle of a sexual revolution, and music is fuelling it. Cardi B, JUNGLEPUSSY and Rihanna are just a few of the artists making sex-positive music, an antidote to the misogynistic bullshit we get fed at the club every weekend. And it’s nothing new really.

Women have been saying fuck you to respectability politics and the policing of women’s bodies for decades now. We’re wearing, saying, doing whatever and fucking whoever the hell we want. And South Africa is no exception. Building on the legacies of Brenda Fassie and Lebo Mathosa, Babes Wodumo, Moonchild, DJ Doowap, FAKA and Lady Skollie are just a few of the empowering women and femme artists inspiring sexual liberation in Johannesburg and beyond.

The latter four have performed at Pussy Party, where femme DJs and artists can do the most without being told what works. It’s a welcomed escape from the boys club that is today’s music and creative industry. And everyone is paid the same regardless of their popularity.

For music lovers, it’s the opportunity to experience everything from old school disco to bubblegum kwaito, sweaty Gqom and sexy R&B sounds in a safe space.

Si'Noir playing a trial set after having attended the Pussy Party workshops for the last few months. Photo by Max Thomik.

There’s a connection between the crowd and whoever is behind the decks that you don’t often find on the Johannesburg club scene, where you’re most likely to hear the same radio hits over and over again.

In an effort to encourage more women to get behind the decks, each party is preceded by an interactive DJ workshop facilitated by Rosie Parade.

And while each party still has a surprising number of guys in attendance (who all have to pay an entrance fee, an amount at the discretion of the person at the door), the event is unlike anything else in Johannesburg. Picture a pro-femme community of artists, activists and friends moving around carelessly to experimental sounds.

Mujaji The Rain playing her debut set after starting with the Pussy Party workshops. Photo by Max Thomik.

There’s an effort from everyone, not just Phatstoki and Rosie Parade, to create a shared energy of respect that permeates the space. At Pussy Party, there’s no room for you to be a dick.

Pussy Party goes down on the second Wednesday of every month at the bar currently known as Kitchener's. On 9 November, they'll welcome NON Records co-founder and avant club performance artist Angel-Ho for their official Johannesburg debut. They are supported on the night by FAKA, a debut live set from Mr Blouse, and Pussy Party residents Phatstoki and Rosie Parade. More guests to be announced. Keep up with Pussy Party on Facebook for updates.