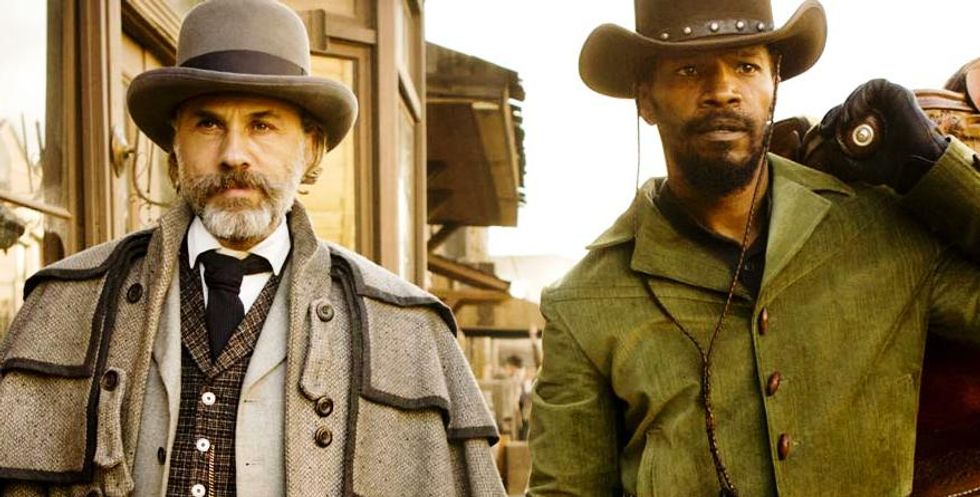 Reasons we're nervous to see 'Django Unchained,' including some theories on our end that Tarantino has a serious complex with race.

Django (Jamie Foxx) is a slave living in the Deep South after having been separated from his wife Broomhilda (Kerry Washington). When Django is held for a slave auction, Dr. King Schultz (Christoph Waltz), a bounty hunter who poses as a dentist, frees Django from his vicious masters, the Speck brothers (James Remar and James Russo), and gives him the option of hunting down and killing the Brittle Brothers, a ruthless gang of killers whom only Django has seen. In return, Schultz will free Django from slavery completely and help rescue Broomhilda from the plantation of the charming but ruthless owner, Calvin Candie (Leonardo DiCaprio).

Django Unchained will be released next month and there's a lot of anticipation for the Tarantino production. The past year has been filled with a lot of discussion in regards to the subject matter (slavery); based on preliminary readings of the script, some theories on our end that Quentin Tarantino has a serious complex with race, and snippets we've seen from the trailers- we're bracing ourselves for a number of reasons:

1) Leonardo DiCaprio usually plays the nice, confused, tormented guy that you can't help but feel sorry for. This time things are going to be very different, with DiCaprio cast as a sadistic Mississippi plantation owner. Pretty sure he's trying the Denzel trick, to finally get that Academy Award.

2) We have an inkling Tarantino will use this as an opportunity to break his record for saying "dead nigger" at least as many times as possible in a 1 minute sequence, after setting the previous record in Pulp Fiction.

3) If you're unfamiliar with Tarantino's last film- Inglourious Basterds:

It tells the fictional alternate history of two plots to assassinate the Nazi Germany political leadership, one planned by a young French Jewish cinema proprietor (Laurent), and the other by a team of Jewish-American soldiers led by First Lieutenant Aldo Raine (Brad Pitt).

a. Inglourious Basterds has been recognized as a captivating and compelling theatrical examination of redemption- rewriting history in a way that we wish it was. We wonder if Django Unchained will successfully do the same as Tarantino has suggested the films are part of a "loose trilogy".

b. In Inglourious Basterds, Laurent, a young Jewish woman, completes the final redemptive act of killing most of Nazi Germany- including Adolf Hitler- we're a little apprehensive if Django Unchained will recognize the significance of Laurent herself being the agent that carries out the act. From what we've read at this point, Christopher Waltz will play a large role in Jamie Foxx's ability to locate and save his enslaved wife, leaving us doubtful if Django (the freed slave) will have the same agency as Laurent.

4) Kerry Washington. Based on readings of the script, it seems that there will be a lot of nudity in the film. We're waiting to see how/if it will escape the hypersexualization of the black female body.

Seriously, though. We're looking forward to watching this opening night, December 25th. Check out the trailer below.