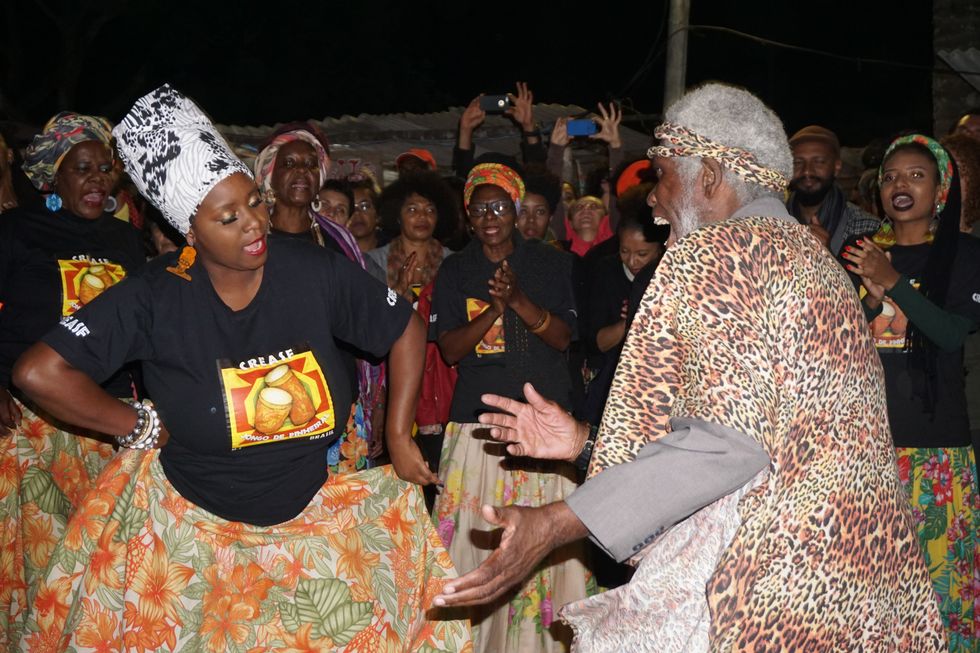 Communities founded by slaves in Brazil keep the spirit of their ancestors alive.

In every image of Preto Velho, he is depicted him as an old white-haired black man sitting down, holding a cane and sometimes smoking a pipe. He looks like a grandfather, full of wisdom from a difficult life. Preto Velho (Old Black Man) isn't a real person, but he represents the spirits of old enslaved Africans and blacks and his presence is felt the strongest in Brazil. Worshipped in the Umbanda religion, Preto Velho is the spirit of the African ancestors who were taken from their homelands and forced to work as slaves in Brazil.

"Pretos Velhos and Pretas Velhas are all the men and women who were enslaved and became old," says Thiage Henrique, a follower of Umbanda. "Being that they are old, they are people who overcame hardship. Even with their suffering and bondage, they succeeded in obtaining a superior force."

Most enslaved Africans lived short lives toiling on the land of Brazil. But some grew old and gained a wisdom that many Brazilians seek out today as protection. These people are the Preto Velhos (Old Back Men) and Preto Velhas (Old Black Women). Brazilians, white and black, celebrate the Umbanda spirit throughout the month of may, but his special day is May 13. May 13 also happens to be the day Brazil became the last country in the Americas to abolish slavery—130 years ago in 1888.

Every year May 13 rolls around in Brazil, the calendar fills up with lectures, television specials and even commemorations for the end of slavery. But Afro-Brazilians who have a strong connection to their African heritage and their enslaved ancestors refuse to celebrate or even acknowledge this day as the end of slavery. For these people, commonly referred to as Quilombolas, May 13 is the day of the Preto Velho. Quilombos are black, self-sustaining communities typically found in the countryside of Brazil and its residents are called quilombolas. The term "quilombo" comes from Brazil's oldest and most infamous quilombo, Palmares in the 17th century. Runaway slaves formed the self-sustaining community, which was led by Zumbi, a warrior who defeated the Portuguese several times when they tried to destroy Palmares. Today, the Brazilian government recognizes communities that are reminiscent of this first quilombo.

The São José de Serra Quilombo, the oldest quilombo in the state of Rio de Janeiro sits three hours outside of Rio de Janeiro in a region that during slavery supplied 75 percent of the world's coffee. This quilombo community of 150 people hosts Brazil's largest festival in honor of the day of the Preto Velho. More than 3,000 people descend on the small community with their tents in hand for 24 hours of feijoada, samba and jongo dancing. In recent years, the festival has taken on a greater meaning for the community and the people who support it. In 2015 the quilombo achieved full rights to its land as a recognized quilombo. The community owns the 476 hectares that it sits on. The people who live here will never be forced out by an overzealous developer or farmer.

São Jose de Serra's residents are descendants of enslaved Africans who arrived on the former coffee farm in 1850. To survive, they planted their own food, including potatoes, cassava, beans, guava, oranges, bananas, jackfruit and passion fruit. Over the next 160 years, the elders of the community passed down African music and religion to their descendants. Now it manifests itself through the Umbanda religion, Jongo dance and even the food. The most sacred area of the community is the tree of the jequitibá. The tree is more than 100 years old and it towers over the rest of the trees in the countryside. Community members look to the tree for spiritual protection. Today, most families still live in adobe houses made from the mud of the land. Electricity didn't reach the community until 2006. Even today, cell phones don't receive a strong signal.

Visitors to the Preto Velho festival begin to arrive in the morning when the first activity is mass in the community's chapel. Unlike most Brazilian Catholic churches where a white Jesus and white angels feature prominently, images of a black Jesus adorn this church. By mid-morning the smell of feijoada (a pork and bean stew) and BBQ beef blankets the air. Little stands sell caipirinhas, shots of cachaça and even locally made black dolls. A Roda de samba, a group of people who sit in a circle and play samba music, starts during lunchtime and lasts until sunset. Others play capoeira or dance maracatu, a Brazilian rhythm from the Northeast of Brazil.

After everyone has eaten and the night begins, the jongo musicians begin to prepare their drums for an all-night session of jongo. Jongo is an Afro-Brazilian dance and rhythm that has roots in Angola and the Congo. During their free limited time, enslaved blacks on the coffee plantations gathered to dance to the drum music of their ancestral homelands. The drums were and still are considered sacred because of their ability to communicate with the ancestors. The dance that accompanied these rhythms consisted of a man and women playfully dancing together in a circle of people. The lyrics that accompanied the song became a way for them to pass down their history and ancestry, without writing it down.

For jongo dance groups in Rio de Janeiro and São Paulo, the São Jose de Serra Quilombo festival is an annual pilgrimage to show off their dance moves and drumming.

"Jongo makes me feel free," said Jessica Castro, a jongo dancer from Rio de Janeiro. "I feel strong, I feel like strong black woman. I am using the strength of the drum to connect with my Afro-Brazilian identity."

When night hits, the Jongo dance troupes start to dance in circles. Some dance circles are open to jongo dance enthusiasts and others are closed-off affairs, only open to members of the group. This lasts until midnight when the elders of the community start readying the wood for a bonfire.

Thousands of people gather around the bonfire, waiting for it to be lit. The honor goes to the oldest living members of the community. After it is lit, the head of the community calls to the Preto Velhos e Preto Velhas—the spirits of the jongo dancers who have since passed. Then she sings a song verse and the drums start. This jongo dance circle is exclusively for community members, old and young, to show off the dances that have been passed down generations. Visitors watch and take it all in.

After the community's jongo dance ends, the bonfire continues to burn through the night. People dance jongo into the night and the morning. The bonfire eventually extinguishes by itself. The thousands of people who arrived the day before, leave by noon. Many of them will return to the São Jose de Serra Quilombo for next year's celebration of Preto Velho.