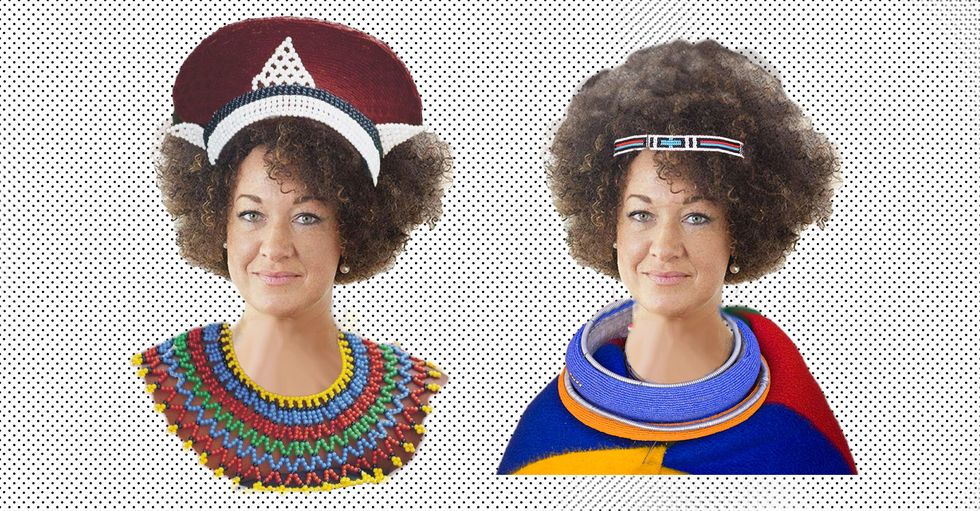 Dolezal has taken her trans-black clown show international, touching down in South Africa and perplexing everyone she meets there.

The Joburg Theatre has been home to such spectacular productions of American culture as The Colour Purple and The Great Gatsby. This evening, however, its stage will be home to something considerably less spectacular—Rachel Dolezal. The show is hosted by The Quest for a Non-Racial South African Society, an organisation very few South Africans knew even existed up until a few days ago. Led by the well-known and otherwise incisive political analyst, Clyde Ramalaine, they invited Dolezal to participate in their inaugural public dialogue in a move which has left many South Africans genuinely wondering whether April Fools is coming around twice this year.

This, after Dolezal's awkward interview on radio 702 with award winning journalist and political commentator, Stephen Grootes. Amidst Dolezal's black-woman-stuck-in-a-white-woman's-body tirade, Grootes struggled to hide the genuine bewilderment and amusement in his voice and eventually cut her short after expressing his fierce disagreement with her views.

Dolezal went from the frying pan into the fire when she spoke later at the University of Johannesburg where students were left wondering why she was even there. Not to be disrespected on home ground, student after student responded to Dolezal's foolishness with quintessential South African clap-backs that reduced Dolezal's claim to blackness to exactly what it was– a disingenuous Nigerian name, a head full of braids and not much else.

A self-proclaimed American “black rights activist” Dolezal was outed as white after claiming to be a black woman for several years. What is baffling to many however, is how and why she is currently in South Africa speaking on her experience as a black woman and the notion of a non-racial South African society.

After the #KasiMlungu fiasco a few months ago, I find myself wondering why it is becoming a norm for braid-wearing white women to unabashedly claim to be black women and fiercely so at that. I am genuinely amused by the fact that Rachel Dolezal, or should I say Nkechi Amare Diallo—the name she legally changed to last month—boarded a flight in the US and spent approximately 17 hours in the air travelling to South Africa, to speak on her fraudulent experience as a black woman.

Firstly, Dolezal is not black. Nothing she says will add a smidgen of melanin to her glaring whiteness. Secondly, although race may not be biological and is to a large extent a social construct, it is not a garment one can simply put on and off at one’s fancy or convenience.

Black students at UJ, and not ones to mince their words, have asked Dolezal why she can't see how problematic it is for her to firstly appropriate the experiences of black people and then attempt to teach black people themselves about blackness. They have also asked her what exactly she feels are valid daily black experiences apart from her wearing braids to which Dolezal has offered glaringly ignorant remarks which make blackness appear to be a sorority that one can simply join after pledging allegiance to black people.

#RachelDolezal Student "It is twisted & problematic that you are appropriating our experiences-trying to teach blacks about themselves" SM
— Jacaranda News (@Jacaranda News) 1492536467.0

#RachelDolezal Student asks Dolezal "What are your daily experiences as a black person? Is it wearing braids?. What is it?" SM
— Jacaranda News (@Jacaranda News) 1492535298.0

Many South Africans have suggested that perhaps Dolezal is mentally ill or suffering from a genuine identity crisis but I think this incorrect. I strongly believe that Dolezal is doing what her predecessors have done for centuries. She has found a way to appropriate blackness and commodify it and make it a talking point that has absolutely nothing to do with the progression of the black agenda or the rights of black people but everything to do with exercising and being a beneficiary of her white privilege.

I don't think #racheldolezal is mentally ill, She knows exactly what she is doing and she is profiting from black pain and black culture!
— komape to you! (@komape to you!) 1492500480.0

I must say though that as I write this, I am conflicted. On the one hand, I feel it is my responsibility to speak up for black South Africans in particular, to continue the attack on racism, white privilege, the appropriation of our blackness and culture and the trivialising of what it means to be black and to struggle. On the other hand, it's unambiguously clear to me that Dolezal has been thriving on the attention she's received since she came into the spotlight a while ago. Although she subsequently lost her job, she's gone on to write the memoir In Full Colour and is out here touring South Africa and patting her braids as if she's Beyoncé. And after having lost much of her steam in the US and become irrelevant, she thought she'd travel to 'Africa' because black South Africans can't see past her charade in the same way that black Americans, and frankly the rest of the world can? Not today Satan.

And so with that, I refuse to say anymore with regards to Dolezal, her fake blackness and even faker activism. I refuse to hashtag her in any more tweets or take any more aspirin for the headache she's given me and the rest of the country. South Africa is going through a politically volatile time right now from a weakened Rand, a downgraded investment rating to a president who stubbornly refuses to step down honourably. We cannot afford to lavish Dolezal with any more of our time, attention or mobile data.

So to Dolezal, it's been great but I wish you a safe place flight back to the US and sincerely hope you won't be visiting us anytime soon. I mean it. As welcoming as we are, it must be said, you are not welcome here.