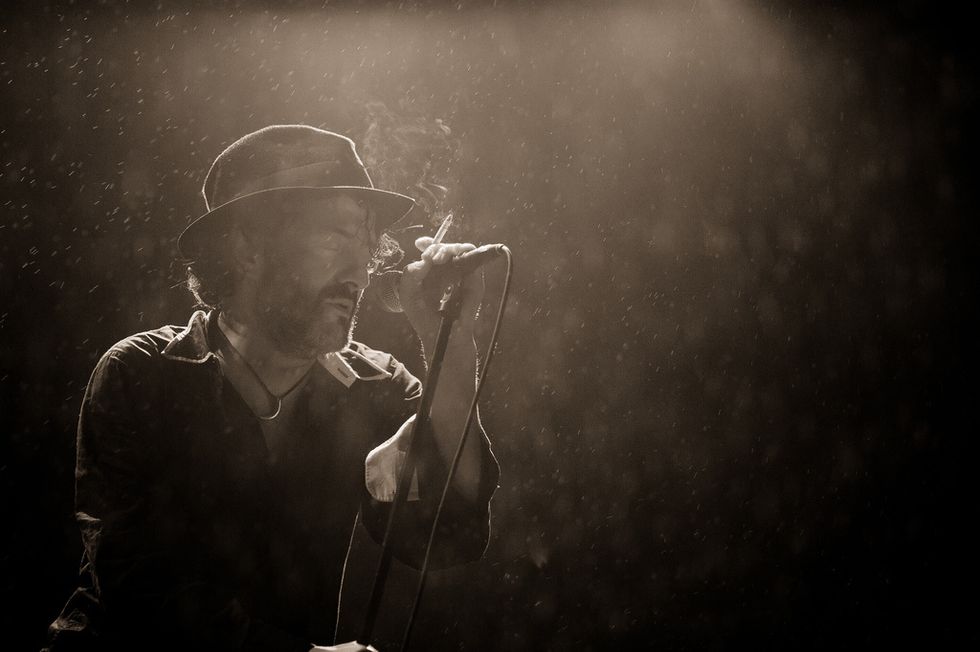 Rachid Taha paired potent lyrics with the rebellion of Rai and punk to create music most artists can only dream of.

Rachid Taha very sadly stopped breathing this week. He has gone the same way as so many great artists of the sacred pre-internet era. All of them loosening their tethers with the material world. Dying off, yet leaving behind their voices, the cryptic secrets of their souls well preserved for future generations.

As a kid going to Paris to visit my family, all Sephardi Jewish immigrants from Morocco, it was like being welcomed by a clan more than visiting your aunty—overwhelmingly emotional and noisy. Food was piled high on many plates and bubbling in pots. Too many people in one room. An endless array of hairy uncles with toothpicks. Cousins for days. Characters from another era. Men and women who had escaped another world and settled in Europe to have kids and loads of them at that. This was alien to me and I had to adapt.

I was born in Edmonton and brought up in Ilford with mates called Barry and Graham, who only felt comfortable with physical contact when it was violence. Feral boys who baulked at anything foreign including artichokes. When I visited Paris, I was transported from climbing frames, history classes of fat kings marrying Spanish princesses and football songs to the claustrophobic hilarity and tears of my North African extended family, who communicated with me in French and broken English, Hebrew and Arabic.

It was on one of these days that I sat cross legged in front of the TV, where I always waited to see any musical act that would come on, usually introduced by a middle-aged man in a tan with blow-dried hair. My reaction to one character stayed with me to this day, Rachid Taha, may God rest his beautiful soul.

He emerged singing in Arabic with his band Carte de Sejour (Residency Permit), singing of love while looking like a Berber Adam Ant. All this happened as I was surround by the joys and whooping colours of fried aubergine, pomegranate and Harissa.

"Habibi," the mournful plaintive cry of any North African singer, is what he sang. The desperation of love lost, yearning with the knowing twinkle of a man who could have it all, whatever he wanted. Look at them there. A new romantic gang of Algerians lounging on a stage that was jam packed from elbow to knee. Tanned, relaxed, as easy smiles on the soft cushions of a bedouin lounge.

Habibi he sang, as he indecently played with his prayer beads and brought them to his mouth. His friends all around him—one guy playing oud with a Sci-Fi hologram sticker on his forehead. A beautiful woman staring across at him. Men playing percussion. Men smoking Hookah pipes. A girl passed out from the hazy smoke with the gentle endless life of a water fountain in her ears. All the men in vests or pirate shirts. The familiar tiled room. The wild and otherworldly intricate patterns that could only ever be constructed in the elevated mind of one who is continuously stoned on hashish.

As Rachid sang his prayer of the broken hearted, at his feet sat a studious man in a scarf who looked as if he was incanting the scriptures of the Quran, oblivious to the heat and lust he mouthed away, sat right next to an empty treasure chest. Rachid broke from emotion to knowing laughter, a private joke, as two men dressed as Ali Baba crawled across the stage with hammers as if they were here to murder our friend.

What the hell is this? I can safely say I did not know what was going on that day but there I was on my knees by the screen transfixed—and I still am. Rachid was punk in the truest sense. He played with your expectations. He would charm you rather than bludgeon you. His very presence, his language, the glint in his eye. That was edgy enough. Raw sexuality. How do you beat that? That's what makes brown babies.

One year later he was covering the famous song "Douce France." This truly shocked the nation. Oh France, a country where you can never truly be accepted as a French man unless, well, you're a French man. There has always been something in its awkwardly aloof air that has kept people divided in their midsts. Catholicism? Conservatism? None of this was to the great concern of Rachid as he wailed, like a Berber Joe Strummer, the words and sentimental melodies of Charles Trenet. The song of patriotic France:

Sweet France
Dear country of my childhood
Cradled in tender carefreeness
I have kept you in my heart!
My village with the bell tower and with noble houses
Where children of my age
Have shared my joy
Yes, I love you

All of this without so much as a sneer. Just his transplanted fire and spleen. A guttural howl of 'I am here now,' in your villages, in your cities. It wasn't aggressive, that was not the way with Rachid Taha. He was better than that. A good friend, a neighbour. In the video he bears the flat cap of the simple French villager, laughing with the local priest, kissing the village belle in the forest. Oh the fear! The scandal! You're having a laugh.

The video starts with the Islamic call to prayer and ends with our hero shirtless on stage at his own punk rock gig as the crowd pogo to his rhythm. If this wasn't a man who challenged the status quo then what is? This was a man who, when he hit the scene in France, was so sick of not being let into clubs that he started his own—mixing Led Zeppelin and Kraftwerk with Arab beats like it was 2018.

Rachid Taha was born in 1958 in Oran. Born into the Algerian struggle for independence against French domination. A world where their books had been burned, history rewritten, and children were taught to repeat the mantra in their classrooms that their ancestors were Gaulois. Nos ancêtres les Gaulois.

How brutal colonisation is that it robs you of not only your material wealth but the very sense of where you came and who you are. Resistance will direct you to where you are going. Taha's resistance always seemed as wry as it was angry. Taking the rebellion of Rai and punk music and engaging us with lyrics in the vein of Mohamed Mazouni. He did that thing that an artist can only dream: he truly connected.

Growing up, Taha was drawn to the music of the neighbourhood, Chaabi Music, that escaped from the smoke filled hashish dens and into the every day private lives of the people. Songs sung in Arabic or Berber, played with violins and oud, furiously powered by percussion and claps. Uplifting and trance like. Songs of love and betrayal and emigration. One of the most famous you may find Taha would play to the world. A song for every man and woman who leaves the cloying sweetness of their family rhythm in North Africa, or truly anywhere else, to the harsh, bland and insensitive life of Europe or beyond. Dahmane El Harrachi's "Ya Rayah," which is played at every North African wedding or Barmitzvah.

Oh where are you going?
Eventually you must come back
How many ignorant people have regretted this
Before you and me
How many overpopulated countries and empty lands have you seen?
How much time have you wasted?
How much have you yet to lose?
Oh emigrant in the country of others
Do you even know what's going on?
Destiny and time follow their course but you ignore it

He loved France much more than he hated it and that is the point. He stood up to racism whether it be on the street or institutional but confronted it by getting people on side not alienating them.

The humour and verve of Rachid Taha had no time for us being divided by religion. Your knowing handsome neighbour, who understood you in a wink. Muslims, Jews, Christians, Non believers. All thrust amongst each other in this dance again from elbow to knee. Crotch to crotch. Femininity and manliness entwined in performance. The smoke in the air. What a privilege to have been alive on his dance floor. One of the greats. He even credited himself for having inspired The Clash's "Rock The Casbah" and you can believe it. Look it up for yourself.

Rachid Taha ceased breathing this week, his heart though will not stop.

Mike Title is the frontman of the Intergalactic Republic of Kongo.