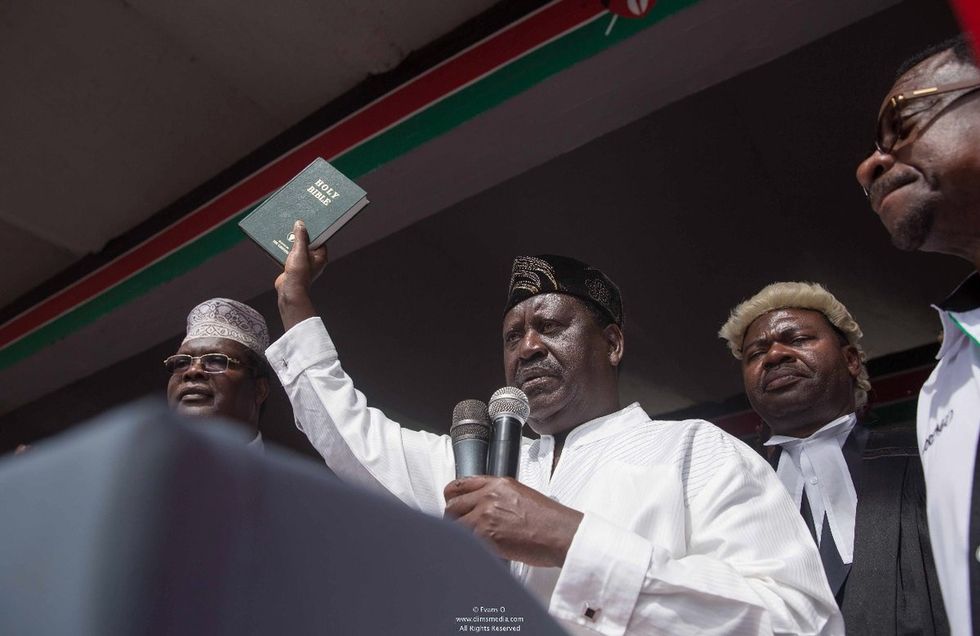 Opposition leader Raila Odinga declared himself the "people's president" of Kenya on Tuesday.

Who is the rightful president of Kenya?

Well, many believed it was long-standing Uhuru Kenyatta, after he beat main opposition leader, Raila Odinga in an unprecedented election rerun last October, but it seems Odinga—after having accused his rival of election tampering and initiating the rerun—remained discontent with the outcome. He argued that no true reform had occurred within Kenya's election committee, and urged his supporters to continue to challenge the results.

The opposition leader led his own psuedo-inauguration on Tuesday morning, in which he declared himself the "people's president," reports BBC Africa.

I wish to thank the people of Kenya for the mandate they have given us and for their steadfast confidence in us. Yo… https://t.co/BIw3vUKywf
— Raila Odinga (@Raila Odinga) 1517320793.0

The ceremony was attended by some of his most loyal supporters, who participated despite threats from the government that it would be considered treason if they were to do so.

The national government refused to broadcast the event on television.

During the ceremony, Odinga declared that he has a "high[er] calling to assume the office of the people's president of the Republic of Kenya." But many are calling the ordeal a blatant publicity stunt.

According to BBC Africa, the event lasted just 20 minutes, and Mr. Odinga left his supporters confused and wanting more out of the affair. Though the event was considered illegal by the government, some argue that nothing took place that they law doesn't allow for, as Kenyans reserve the constitutional right to exercise their power directly through peaceful assembly.