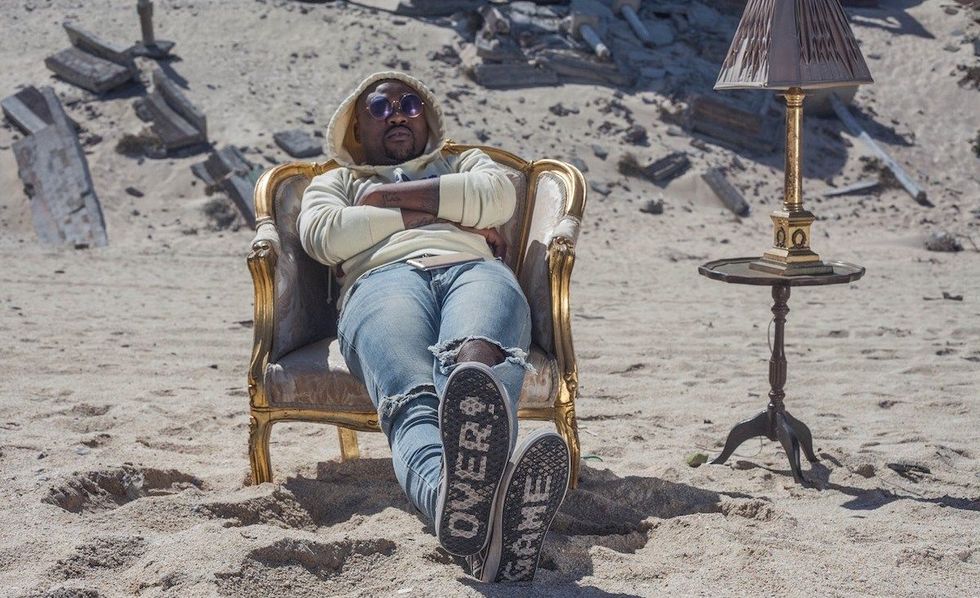 South African rapper Reason’s fourth album Love Girls was released officially today. Love Girls is a concept album about the rapper’s experience with some of the women he has had relationships with. It’s a solid release, just like the man’s previous efforts.

The album features monologues from women who state what type of girl they are, and their reservations on men and being a woman.

Reason challenged himself, even singing on some songs (with the aid of auto-tune of course). The rapper enlisted the one production team The Boyz Upstairs for the whole album, and that resulted in a coherent production style, which makes for a comfortable listen.

Every song on Love Girls is worth your while, but if you have a short attention span, we did the work for you and picked the seven most solid songs on the 14-track album (based on our first listen).

This song sets the tone for the album. Over a mellow instrumental that leads with moody keys, Reason is introspective, admitting, without spelling it out, that #MenAreTrash. He does this by admitting his fallibility then warning the woman he’s talking to about what men are capable of. Rapper BK who plays the broken girl, gives her side of the story, expressing how much she loathes being cheated on (“Side bitch drama while you out real late/ Don’t try to kiss me with the same mouth you just ate cake... with”). In her verse she conveys the emotion behind her being broken. It’s a good verse, which she only hurts with a horrendous line like “make it pop more than popcorn in the microwave.”

Reason’s first verse is one of the most impressive on the whole album. An excerpt:

Yes, I understand the contradiction’s enormous/

It’s quote a common thing whenever men are just honest/

And I'm just telling you that fucking up isn’t obvious/

It happens to the best of us, from rappers to pastors/

From actors to sports stars, to regular folks cuz/

The matters of the heart don’t have a camera focus/

In reality the sun shines upon all us/

“The Blessed Girl” is a tongue-in-cheek take on the blesser trend that hit South Africa in the past two years (a blesser is a sugar daddy). Reason tells the story of a blessee: “Niggas with money be wanting her [?]/ Don’t give a damn what the future be like/ Long as they get her champagne for the [?]/ We all know, she got be here for the highest bidders/ Remy or Peri for all the thickness/ better come near me ‘cause you wanna listen.” The rapper sings the hook, and the chants that he uses to censor some words make the song even more satirical. Coupled with the music–a selection of whizzing synths and pads–they gives the “The Girl Upstairs (The Blessed Girl)” a club feel, which is where blessings normally take place. Rapper Ginger Trill’s verse however steals the show–it’s short yet the man wastes no single bar, as per usual fashion, telling a story within a short space of time, and even playing with the word “curve,” and all its three meanings. 😭

“So Beautiful (The New Girl)”

Dating Reason isn’t easy for his new girl. On this song, the rapper tells the story of how his new girlfriend is afraid of the spotlight and all that comes with it: “She sat besides me with a blunt and a drink/ She told me straight that she’s scared of the scene/ Scared of what is and whatever could be/ So many critics for something that seem/ certain to me...” “So Beautiful (The New Girl)” is short and straight to the point, and sees the rapper at his most vulnerable in the album, empathizing with the girl in question, and assuring that what the two of them have is a beautiful thing. It’s also Reason’s best singing on the whole album–with minimal autotune. Watch the tabloids tell you who this song is about.

Sonically this song is the the closest the rapper gets to the Reason of the mid-2000s. It’s one of the few songs in which you don’t hear any singing–the hook is rapped, and the music gets close to boom bap. “Celebrity (The Club Girl)” is a song about the girls who work in clubs, who Reason says make him feel like a celebrity. As a result Reason is egotistical, and it works. He raps, “Your insta crush screaming in my ear as she pounces/ Everybody knows who the realest in the houses is/ Hardcore rapper in a section with some house cats/ Skinny jeans baggy ‘cause my pockets full of thousands.” “Celebrity (The Club Girl)” is laced with perfect verses over a potent instrumental with a soulful sample.

On this X-rated song, Reason talks about a naughty girl, and the song’s vibe is more than fitting. It’s a ratchet trap banger that wouldn’t feel out of place in a shebeen. And Kwesta was the perfect feature for it, rapping lines like, “Call you my bitch ngoba ngiyinja kakhulu/ Call you my bitch ngoba ngiyinja, ngi-cool.” It’s all tongue in cheek, and could come off as offensive, depending how you look at it. Reason’s contribution, “You a good girl? I ain’t sure right now/ ‘Cause you sure acting like a hoe right now.” But the way the song came out makes it out one of the standout songs on the album.

“PDYCM” is an acronym for “Please don’t you confuse me.” Reason recycled that hook from a skit off his second album Audio High Definition (2015). The skit featured Bonang Matheba. “PDYCM Pt. 2” features the self-proclaimed “Young Mabrrr,” the rapper Moozlie, who walks over the prominent baseline with the confidence fans have come to expect from her. She talks about how annoying men in clubs can be. After hearing her verse, the fuckboys she’s calling out are sure to avoid any contact with her. The song is minimalistic, and is tailored for both the club and private listening.

Reason stretched himself on this song. There’s little to no conventional rapping on “Lovey (The Angry Girl).” The song sees even one of the most gully rappers in South Africa, Mr. Beef, crooning his verse in autotune. It’s about an angry girl, who picks fights for even the smallest things. According to Reason, this song came about after a conversation in which Mr. Beef was telling Reason about a fight he had just had with his woman. “Lovey (The Angry Girl)” is a trap slow burner that leads with a smokey pad which meanders over a high-item hit hats and a loud clap for a snare, and deserves a spot on your playlist.

Stream Love Girls above and buy it here.