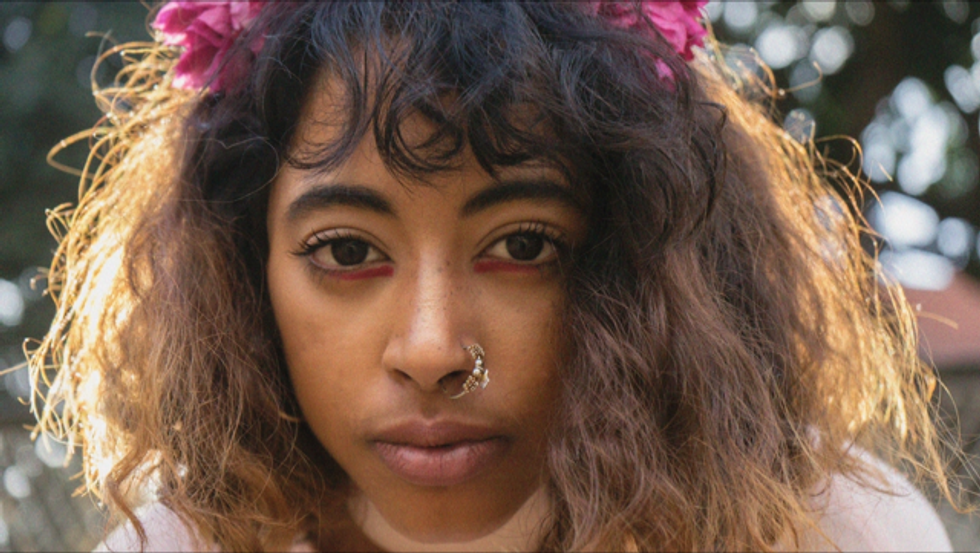 Red Robyn is part of Durban's growing new sound, one built on a love of jazz and spirituality.

Seemingly in spite of the prevalent attitude of the current Durban music upstart community to follow the sonic lead of bankable hits like Sketchy Bongo’s "Back to the Beach," or jumping on the bandwagon of the now-proven gqom-wave, a group of artists and industry players of the city are forging ahead with a new movement.

The new sound stays true to its heart and revels in a new-found popularised love of new forms in jazz, drawing lessons from the best doing it now and in the past.

Although the collaborative nature of this group has been written about before, Red Robyn—who's premiering the lead single off her upcoming debut album here today—credits it directly with whatever success she's found up ‘til now, “I don’t think I’d even be making music if it wasn’t for other artists reaching out for collaboration. As an artist, I grew so much just working with like a bunch of different people, so now I have a really strong network of people that have like certain skills that like we all know each other, you know.”

"Left Wing," the new single debuted below, is a product of her “makeshift studio that is set up in my little dungeon of a bedroom.” She lives with her father, a longtime gospel-focused musician who originally played some of the bass lines on a previous version of the track, and describes her upbringing in the church as “very strict and very Christian.”

This song, however, deals with a spirituality somewhat evolved from her church-going childhood years. “Sometimes I get like really depressed. I do battle with my mind, I live inside my mind, and I get really depressed and don’t wanna leave the house and get very anxious and I’ll go through various periods of not wanting to leave and then all of a sudden, something that I’ve always wanted—like the Red Bull Studio time—happens to me and I’m like ‘Oh my gosh, I didn’t realise that this was in the pipeline all along…’ So I guess it’s like talking to this ‘spirit’ as a person, saying ‘I can see you. You do things. We don’t always see you, like, on the left side, you know, working,’ but somehow all your dreams fall into place while you’re sitting in the dark room all depressed.”

Featured on synth is Jaedon Daniel, Red Robyn’s best-friend-turned-partner-turned-colleague, who previously collaborated with her on the Red Bull Studio-released "People Talk," and standalone collaborative single "WAVES," which also featured Durban rapper Otarel, producer MISSU and studio-master/musician Sckin. This motley crew of left-field-leaning jazz/pop/hip hop/electronica-heads exist in a burgeoning Durban sub-scene that seems emboldened by the renewed attention on the city's music. They also seem focused on leveraging that attention into developing more experimental modes of the now-better-known electro-pop/soul sounds hitting the mainstream national airwaves, and sitting alongside the underground-darling-gone-global gqom-wave.

Robyn says that it’s “very cool that it’s about your individual identity, not really a group like the Wolf Pack, where there’s a specific sound coming out of a specific group. It’s not like that, it’s everyone sort of doing their own thing, but there’s this support structure.” That support structure often extends to material resources, like the studio that Sckin has set up in his home where The Sun Xa Experiment has just recorded a new body of work, “Daniel is always very gracious in like, allowing a space to work, if he believes in something, so he’s very cool like that.”

On the ‘motley’-ness of the crew, with regard to the variance of the sound, “I think it’s just a bunch of weirdos that don’t fit in anywhere else that found each other, and like ‘hallelujah, we’re all weird, let’s make something cool out of it.’ That’s what it feels like, cause everyone is so different and unique, like you can’t compare two sounds, like MISSU or like what Daniel [Sckin] does or what Jaedon [Daniel] does” Even the mixtape that her and Jaedon Daniel released through Red Bull Studios had that kind of massive variance, explains Robyn, “it’s varied because we’re the kinds of people who don’t listen to one genre of music, we listen to everything at once, so we wanted—specifically with this mixtape, which might not be our sound for the rest of our lives—we wanted it to be like our first exploration of sound and to explore everything that we know and love about music and try and like, have our own voice project all of those things.”

Having come from gospel roots and studied drama and music at UKZN, music really is in Red Robyn’s bones, whose first memory of writing a song was a worship tune on the back of her mom’s diary, in church. On her upcoming, as-yet-untitled debut album—due Oct 2017(ish)—she has written exactly 12 songs, which each speak to one of the 12 different versions of herself, which she believes everyone has inside them, turned off and on for different situations. Having written and arranged all the songs, she hopes the upcoming recording process will produce a richly harmonic and “very ethereal” collage.

In speaking to her own purpose and the purpose of artforms like music in general, she invokes the idea of the Indigo Child, sharing, “I think on a broader scale artists in specific, their job is to hold the consciousness of society, and sort of like reflect it back, so that people who may not realise, start to see what’s actually happening in the world.”

She’s careful to not break her humility. “I can’t say that I am an indigo child, but I do think in this specific time in history, the world, like the soul of the world needs a lot of love, so that’s attached to my music in that sense.”

She speaks to the work of Kate Bush, an artist she recently became obsessed with. “I think a lot of people go into the music industry with an idea of being a celebrity, or a popstar, and there are certain things that you have to do to be a celebrity or a popstar and then you lose the honesty in the music, because it becomes about sales and selling a certain idea about yourself, so I think what makes her music fresh, and what makes any artist’s music fresh is keeping honesty in each song.”

This awareness of musical honesty and commitment to love shines through Red Robyn’s work. This track and the album that it comes off is sure to solidify the channeling of her myriad influences and the expression of her musical obsessions, to reflect the world back at us. “I think, the job is to just reflect what’s happening and to just push positivity and love forward.”

“More and more, you start to meet people who are very loving, very kind, and it’s not by accident. I think it’s on purpose. You can see it wherever you go.”

The regular gigs she’s been playing with her 6-piece solo act and with the Blvck Crystals across Durban’s not-so-shabby daytime/early evening live music scene, paired with the resurgence of young people from UKZN playing their own modes of jazz at late night spots like the iconic Jazzy Rainbow, and the commitment to accessible alt-pop experimentation in her music paint an exciting picture for this young artist’s future.

“I guess at the moment I’m just sort of letting the opportunities lead me to where I must focus my attention right now.”