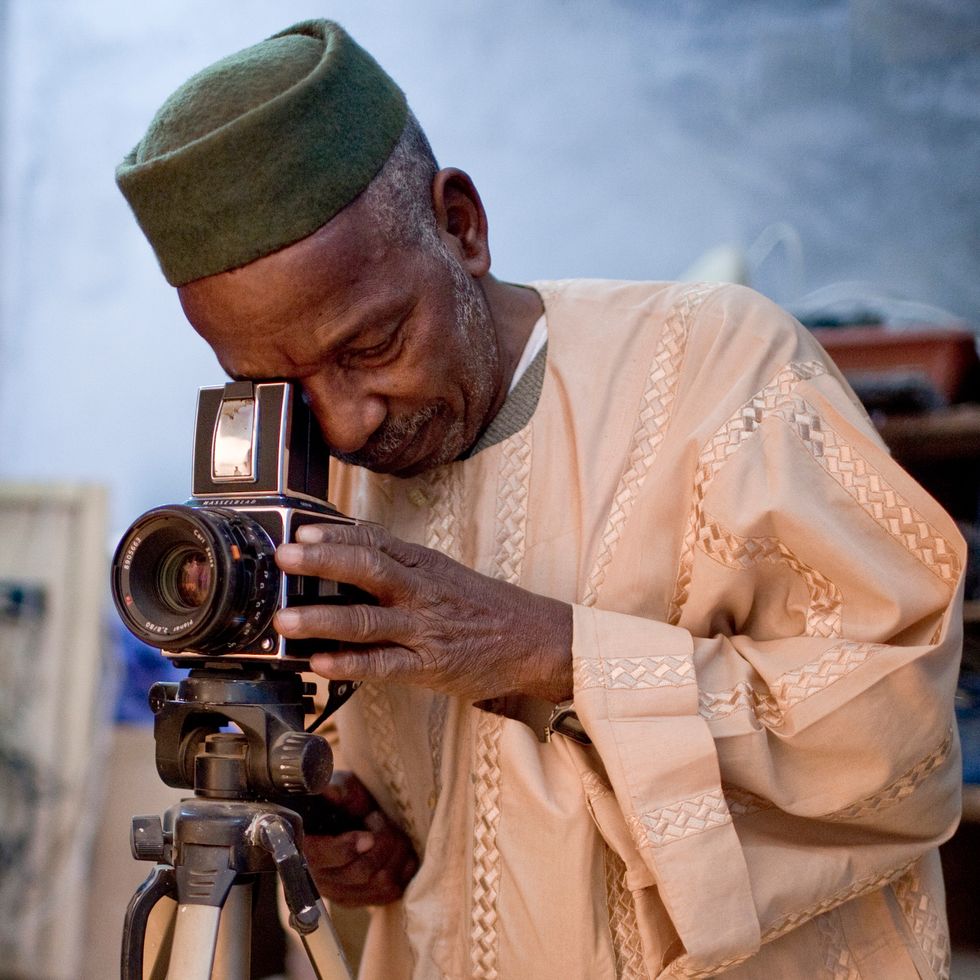 Photo by Glenna Gordon
Malick Sidibé with his famous Hasselblad, the medium format film camera that was his tool of choice.

We asked a handful of artists and photographers to tell us about their experiences with the master photographer Malick Sidibé.

The great Malian photographer Malick Sidibé passed away today. He was famous for his black-and-white studies of popular culture in Bamako of the 1960s which have come to represent an optimistic post-colonial moment in the history of the country and continent. His body of work, and his vintage studio style is still incredibly influential to a new generation of photographers across the continent.

We asked a handful of artists and photographers to tell us about their experiences with master photographer Malick Sidibé. Others posted their thoughts on social media. Here are some of their memories.

Malick with his son, who manages the studio, instructing a couple on how to pose. January 2011. Photo by Glenna Gordon

"Malick Sidibé is a monumental figure of Mali. I remember him from when he took photos of my father when I was a child. He struck me as someone with a deep soul. He is an icon of Malian and even African culture. We have lost someone very important to our country who will remain etched forever in our memory."

I met Malick Sidibé in Bamako in 2009/2010. My partner and I had gone on a holiday to Mali to discover Dogon, the market at Segue, the mosque in Djenne, the festival in the desert and of course we couldn't leave Mali without getting our picture taken by the great Mr Sidibé.

When we first arrived he could not meet as as he was ill but he managed to get out of bed a week later to take the pictures. He was old and frail but so generous with his time and genuinely enjoyed his work. We spoke about his archive and how influential his work had been. It was an effortless and awe inspiring experience and the pictures he took of us are timeless.

I first discovered his work in an article many years ago about the portrait photographers of west Africa which included Malick Sidibé and Seydou Keita. I was enchanted by the vision of Africa that his work represented. It was modern, young, vibrant and nothing like what was represented to me before. His work made me want to travel to West Africa. In fact I think this new wave of hipster portrait photography was probably influenced indirectly or otherwise,by his work and vision.

A monument has fallen in Mali. May his soul rest in peace.

"Malick Sidibé made many great pictures of African modernity. They will outlive him, and us. He showed us as we were, between the desire for solitude (think of his 1979 picture "Je veux être seule") and the wish to be seen and celebrated (think of another famous picture from 1962, "Regardez-moi!"), between the contained and the exuberant. All of it is there. May his soul rest in peace."

Malick Sidibé with his grandson. Photo by Tanya Bindra

Malick Sidibé's photography was rooted in hope and self-expression. As a celebration of youth culture, represented through fashion and music, his photos were somehow rendered timeless even if they pointed to a very specific time in Mali's history.

I visited Malick in 2012 at his home in Bamako. His bedroom was small, comprised of a single bed on the left and stacks upon stacks of disorganized negatives flooding out of a bookshelf on the right. He talked about some of the scenes he captured, not just in the nightclubs or at his studio, but also in his ancestral village and during the 1968 coup d'état.

Regarding his nightlife photos, he told me that he was a shy person and that he hated dancing. But he was the only young photographer with a flash at the time and people seemed to ignore him when he took pictures, so he continued. This gave me great hope that one day I too could successfully take photos like Malick Sidibé.

Malick Sidib�'s many cameras. At his studio in Bamako, Mali in January 2011. Photo by Glenna Gordon

Malick Sidibé created space for joyful pictures that celebrated beauty in many forms. His images document moments of happiness and possibility—both in the youth he photographs, and in the particular moment when he made work, as many countries in Africa transitioned from colonial governments to independent states. These are times when anything could happen

A negative by Malick Sidibé Photo by Glenna Gordon

When I was first living in Africa and learning how to be a photojournalist, I'd take pictures of riots and refugees and send those to newswires, but those images didn't resonate with my lived experience. A turning point for me professionally was when I started a project on Nigerian weddings where I sought out images of beauty and ritual, and made portraits of people in their best dress—the things I'd seen in Sidibé's pictures.

"This image is from the last time that I saw him in 2014." Photo courtesy of Aida Muluneh

I first met Malick Sidibé back in 2007 when I was exhibiting in the Bamako Biannual. I had been a long time admirer of his work and the massive archive that he had accumulated in his lifetime. He wasn't just a studio photographer but a soul who maintained his conviction to document his people through a lens that offered a different perceptive, one with dignity, elegance, beauty and pride.

He was the witness of his generation and that time period which for us the new generation have a reference point of what it means to be dedicated to your art regardless of whether you get recognition or not. A humble man who embraced all of us with a smile and an elder that we all looked up to, Mr.Sidibé's impact is in all of us who continue to move photography from Africa to the world.

We stand on his shoulders and move forward to continue his journey. In this sense, my images that have the checkered floor is a dedication to him. As the saying goes in our country "Jegna aymotem" which translates "A hero never dies." RIP to our hero.