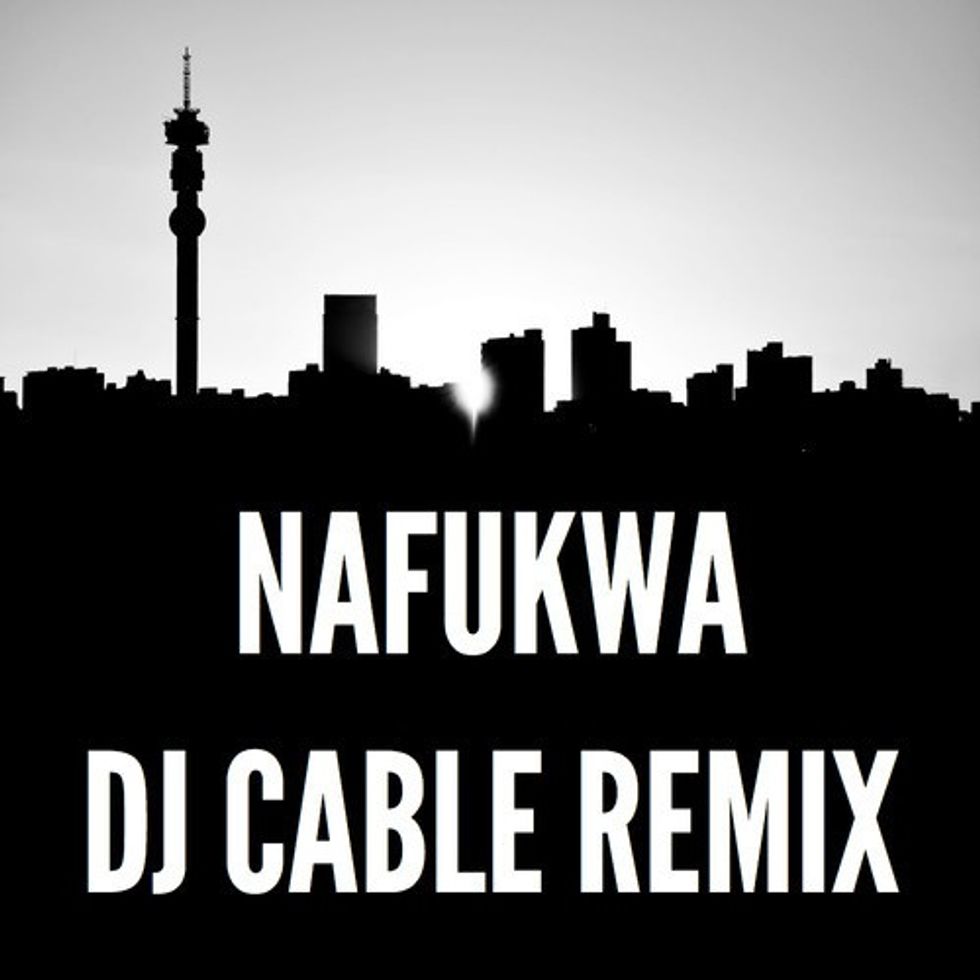 Motif Records rapper Riky Rick's "Nafukwa" quickly became the definitive anthem of BOYZNBUCKS, the Johannesburg "street culture connoisseur" crew whose members include the likes of Okmalumkoolkat, $tilo Magolide, and of course Riky Rick himself. Produced by Ganja Beatz, the trappy banger first hit back in May. In July it received a larger-than-life video from WE-ARE-AWESOME FILM's Adriaan Louw, which was soon pulled from youtube and then resurrected with a warning that the clip contains "strong language and aggressive content." Last month Cape Town beatmaker Maramza gave the original a "Gquom" facelift. More recently the track has made its way to the UK, where BBC Radio 1Xtra resident DJ Cable warped "Nafukwa" into a twisted cross-pollination of BOYZNBUCKS rap and UK grime. The rework has been accepted as an official remix and will soon see a proper release. In a short Q&A with Okayafrica, Cable, who says he may soon be moving to South Africa, shed some light on his affinity for South Africa's hip-hop and electronic music scenes plus Mzansi inroads in the UK radio market. No word yet on when the remix officially drops. For now listen to a stream below.

Okayafrica: How did you first hear about Riky Rick / "Nafukwa?"

DJ Cable: I've got a lot of extended friends and fam out in South Africa, and heard about the tune through them, really. I was familiar with some of the Boyzn Bucks tunes, and I'd been wanting to work with some SA artists for a while, especially them, and after going back on forth on email with a few people, I managed to acquire the acapella, and put the remix together in about a couple of days…sent it back to Riky, he approved and here we are.

OKA: What does "Nafukwa" mean to you?

DJ Cable: Oh the phrase? That's a good question. I don't think anyone knows what it really means, haha! It's definitely got a lot of people talking though, and it's been a good way for Riky to build hype around himself, his crew, and the tune. I guess maybe it translates as "turn up"? You'll probably have to ask Riky!

OKA: Do you play any South African artists on your show?

DJ Cable: I'd like to! So far I've been playing music from Das Kapital and RVWR (two excellent Bass Music producers), but getting hold of upfront music, let alone radio edits, from some of the artists, especially the Hip Hop artists, is surprisingly hard. There is a large audience across the UK and Europe for African music in general..you only need to see that with the way Afrobeat has blown up in recent years…so there's no reason for people not to send me music. If I'm reaching out to an artist, it's because I rate them, and I'd like to introduce them to the UK market, whether it's by supporting via radio, club play, or even including tracks on mixtapes. With the exception of DJ Edu, and DJ Abrantee, not many others are really doing that in the UK. If anyone reading this does wish to send me tunes to be considered for airplay, I've set up a specific email address: djcablemusic@gmail.com.

OKA: Are there any SA artists making waves in the UK at the moment? If they aren't, who should be?

DJ Cable: The obvious one is AKA. I know he's received a lot of airplay on 1Xtra in the past…Some of the House guys, like Black Coffee, DJ Clock, Kid Fonque, DJ Kent, Culoe De Song, etc, have been making noise for a while also. I know "Superman" was a pretty big tune in the clubs when it came out. Hip Hop-wise, Tumi & Reason both tour mainland Europe quite regularly, I think it's just a matter of time before they end up doing more live UK shows. Das Kapital & Leechi have played the UK a number of times, and get a lot of support from the Bass scene too. Okmalumkoolkat has potential to do very well, especially within the electronic scene. It's just a case of everyone getting the music to the right DJs, and building those overseas connections by collaborating with UK artists and producers. If you look at the Afrobeat scene, for example, Ice Prince and Wizkid have worked with UK artists in the past, and it's worked out for them. All it takes is an email these days!

OKA: Who in SA would you also want to remix?

DJ Cable: Loads of people, actually! I rate what AKA, Cassper Nyovest and Okmalumkoolkat are doing - remixing them, or actually doing something properly with them would be cool. Even some of the Kwaito and the Deep House stuff would be fun to work with - Kid Fonque's making some really good music. Thing is, a lot of the broken beat/percussive elements within those tunes are present in UK genres such as Grime, Funky, early Dubstep and Garage, so I think it'd be interesting to take what they're doing an put a UK spin on it.

Tune in to #60Minutes DJ Cable of every other Wednesday on BBC Radio 1xtra.