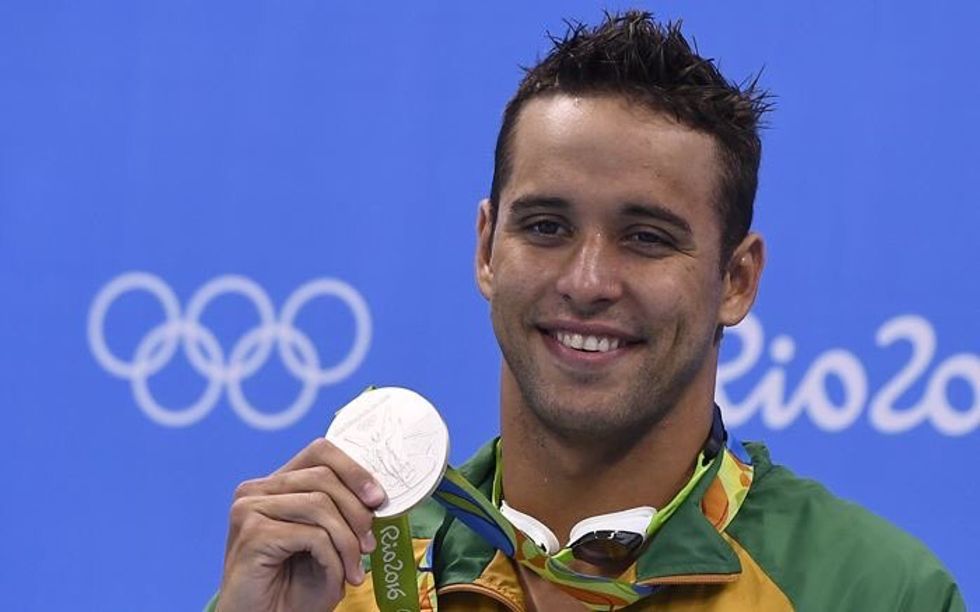 Swimmer Chad le Clos miraculously tied for second with Michael Phelps and Laslo Sleh in the 100m butterfly of the 2016 Rio Olympic Games.

Swimmer Chad le Clos is now South Africa’s most decorated Olympian of all time. The 24-year-old from Durban picked up his second silver medal of the Rio 2016 Summer Olympic Games with a second-place finish in the men’s 100m butterfly on Friday. Le Clos tied for second, rather miraculously, with Michael Phelps and Hungary’s Laslo Sleh with a time of 51.14 seconds. Singapore's Joseph Schooling, 21, came in first with a time of 50.39.

The event was the final individual race of Phelps’ career. “I don’t know if I’ve (ever) been in a tie, so a three way tie is pretty wild,” the 27-time Olympic medalist told Reuters afterwards. “I saw a second next to my name and then I looked up again and I looked over at Laszlo and Chad and hey we all tied. We’re all second that’s kind of cool… It’s kind of special, and a decent way to finish my last individual race. Can’t complain too much,” he said.

Le Clos’ silver marked the fourth Olympic medal of his career. At the 2012 London Summer Games, he famously won gold (and beat his childhood hero, Phelps) in the 200-metre butterfly and picked up a silver medal in the 100-metre butterfly. He placed second in the 200m freestyle on Monday, but came in fourth in the 200m butterfly on Tuesday.

South Africa’s medal tally is currently at five (four silvers and one bronze). Swimmer Cameron van der Burgh picked up Team SA’s first medal of Rio 2016 on Sunday when he placed second in the men’s 100m breaststroke. Le Clos, as we all know, picked up the second the following day. Rowers Lawrence Brittain and Shaun Keeling took home silver in the men’s pair on Thursday. South Africa also captured a bronze in rugby sevens.

?ANOTHER ONE!!! A #Silver for our Chad Le Clos ? who ties with Phelps & Cseh

Bertrand Le Clos and Michael Phelps tie for a silver medal. Thank you Jesus. Peace on my TL pic.twitter.com/q4AP2ek0nf

The Phelps-Le Clos-Cseh tie for silver was the first three-way tie for a medal in #Olympics swimming history.

3 way tie had never happened in an Olympic Swimming event until tonight.

The universe wanted Phelps & Le Clos to mend their relationship, so it made them hold hands for 60 seconds straight. pic.twitter.com/cRnSIBG0tc