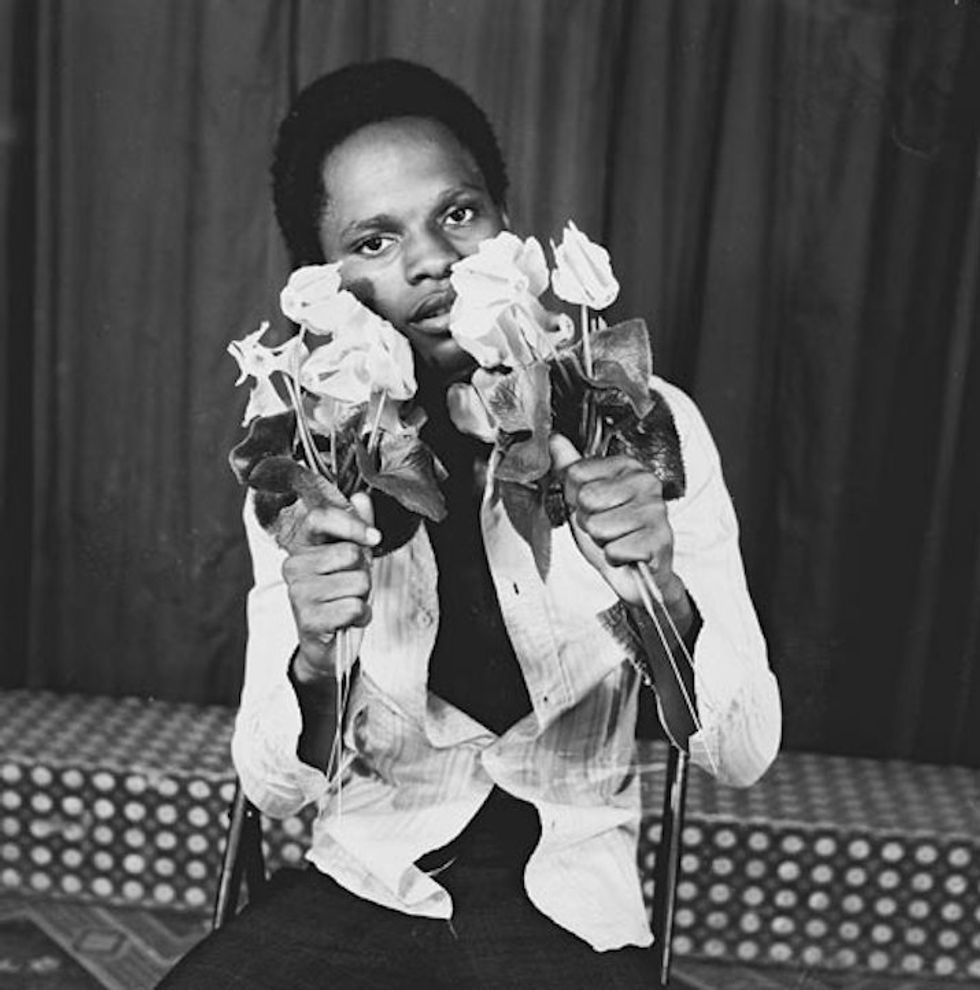 Born in 1962 in Kumba, Cameroon, award-winning contemporary photographer Samuel Fosso began his career taking wedding portraits and passport pictures at the tender age of thirteen. Originally of Igbo descent, Fosso lived with his grandparents in southeastern Nigeria as a young child but fled to escape the tumultuous violence that engulfed his family's village during the Biafran War. After spending two years as a refugee, Fosso finally settled in Bangui, Central African Republic, where he lived and worked as a cobbler with his shoemaker uncle. Unfulfilled with the shoemaker's life, Fosso diverted his attention to photography and spent a year working as a photographer's apprentice under the tutelage of a neighbor.

Fosso opened his own studio soon after and began to assume the role of both model and photographer by turning to self-portraits after he was done with a day's work. Fosso has remarked that his penchant for self-portraiture initially began as a way to keep his grandmother in Nigeria updated on his well being– but it also served as an inexpensive way for him to prevent wasting any unused rolls of film from his glamour photography work. Since they were created without the conceit attached to photographs intended for an audience outside of one's own family, Fosso's early self-portraits bear the markings of an adolescent playing dress up. Finding inspiration from popular fashion and music magazines of that era, Fosso would deck himself out in sunglasses, platform boots and wide-legged bell bottom pants in the privacy of his studio unwittingly creating a visual timeline of cosmpolitanism within Bangui's youth. These early works can be seen in the black and white series Self-Portraits from the 1970's and were taken in his first studio Studio Photo Nationale, which had as its motto: "With Studio National, you will be beautiful, stylish, dainty and easy to recognize."

Nicknamed "The Man of a Thousand Faces," Fosso's work embodies the complexities of identity and in his 1997 series Tati, he adopts a myriad of personas including a golfer, a pirate, and the liberated woman of the seventies. Fosso's personal and public work has always brought the transformative possibilities of photography to the fore and he does so again with his African Spirits series, a set of fourteen black and white images where the photographer reenacts iconic images of cult figures within African and African-American history. With African Spirits, Fosso pays homage to figures of the civil rights movement and Panafricanist heads of state like Martin Luther King Jr., Angela Davis, Tommie Smith, Muhammed Ali, Kwame Nkrumah, Patrice Lumumba and Haile Selassie to name a few. These and other studio portraits from his three decade long career are the the focus of a new exhibit from the Walther Collection's two-year exploration of photo and video narratives from contemporary African artists.

A well-known photographer in his own right within Bangui where he lived and worked for over thirty years before relocationg to Paris, Fosso's body of work was introduced to a wider audience in the early nineties after he won the top prize in the prestigious African Photography Encounters Festival. Since gaining the attention of the international art circuit, Fosso and his reflexive self-portraiture have been the subject of a BBC documentary and gone on display in groundbreaking exhibitions the world over including In/sight: African Photographers, 1940 to the Present at the Guggenheim, The Short Century: Independence and Liberation Movements in Africa, 1945-1994, Africa Remix: Contemporary Art of a Continent, and Events of the Self: Portraiture and Social Identity–Photography from The Walther Collection.