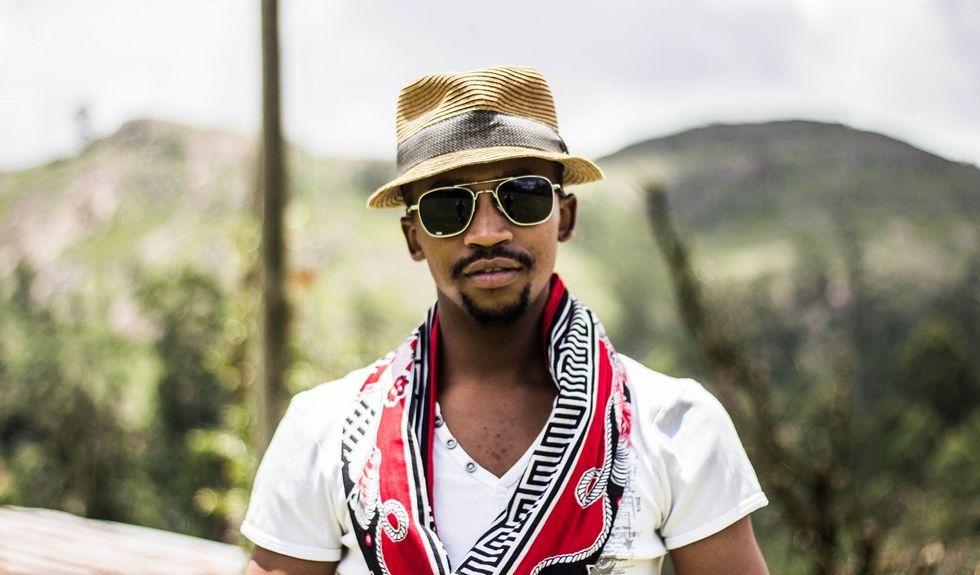 With his hit single "Tigi," Swazi musician Sands has achieved what no other Swazi has done before.

In December, there was no escaping “Tigi,” the catchy single by the Swazi musician Sands.

It was the 2016 crossover song on Swazi radio, and also in some stations in the Mpumalanga province in South Africa, where the SiSwati language—which Sands sings in—is spoken. The single hasn’t lost its tang, especially after the release of its video. It premiered on Live Amp, the biggest music show on South African television—a first for a Swazi musician.

“Tigi” kicks off with an airy sinewy synth enhanced with a little reverb, before the drums kick in, forcing you to bob your head. It’s not clear what will happen before Sands starts humming and, eventually, crooning effortlessly. It’s when the single's hook comes in that it becomes impossible to not move at least one part of your body. It’s clear why "Tigi" became a hit.

“It’s a surprise,” is the answer Sands gives when I ask if he expected the song to be this big, especially considering he’s an afro-soul artist known for laid-back music. “But also when you write a song, you always give it your all. I am diverse, and it will be clear as my career progresses, but yes I do specialize in afro-soul.”

His previous single, “Vuma,” didn’t do bad either. It was the quintessential soulful Sands: a beautiful love song that was essentially a marriage proposal. It’s a minimalist work of art—he sings over mellow keys, subtle hi-hats and a pulsating kick, displaying all dynamics of his voice. Towards the end of the song, he hits the high notes like there’s no tomorrow.

Sands and I are sitting in a restaurant in the heart of Mbabane, the capital city of Swaziland, and he's telling me about his relationship with his producer, SubJamz, when our conversation is interrupted by a man who could be in his early thirties.

“I want you to know that I didn’t burn it, I bought the album,” says the man, who stretches his hand out to shake the singer’s hand. “My favourite track is 'Kuba Nawe,'” the man continues. “I play it on my way to and from work. Well done. Congratulations.” Sands replies with a resounding “thanks” and a light smile.

Scenarios like this aren’t new to Sands anymore. “I’ve received great feedback on the album. I’m actually speechless,” he says. “What I like is that people have their own favorite songs apart from 'Tigi' and 'Vuma.'”

“Tigi” isn’t the man’s first hit. In 2014, he teamed up with renowned Swazi poet and rapper Qibho Intalektual. The duo released an EP, which had a successful single, “Ntfombatane Lenhle,” that was almost as infectious as “Tigi.”

“It took some time to lure him to get into studio with me,” he says when I ask him how the collaboration came about. Sands had just finished studying music, which he did concurrently with his PR degree at the University of Swaziland, where Intalektual was also studying.

Sands was still performing under his birth name Sandziso, with the same four-piece band he plays with. “We’ve been together for seven years,” he says.

Sands' journey as an artist began in high school when his brother-in-law bought him a guitar and taught him a few chords. He taught himself from then on and got a confidence boost from studying music. He performed around campus until he met Intalektual, and they started recording with the producer Sub Jamz, who's highly respected in the kingdom.

What “Tigi” achieved is a first for a Swazi song. The hip-hop duo Siyinqaba, in 2010, had a song, “Gwayimane,” that was almost as big (they performed it on Big Brother Africa at a point in time), but Sands’s level is of a height no Swazi artist has ever reached. “Tigi” is playing on national South African stations like Ukhozi FM, Metro FM and Umhlobo Wenene FM.

The natural question is: how did he do it? Well, it was a combination of many things.

“Mostly it’s because it was a SiSwati song,” says Sands. He goes on to state that because not many songs in the language are released, it sets him apart, and it doesn’t hurt that he’s good at what he does either. “Two, the backing came from home,” he continues. “Thirdly, it’s a danceable song. Four, it’s a love song. It’s got all the elements and many genres in one—jazz, kwaito, house, it has everything.”

What Sands and his team also did was invest in the promotion of the song. “[We went] on a radio tour in Limpopo, Mpumalanga, Mozambique, because we felt it had potential. Everyone who had heard it had said it was nice,” he says.

December was a busy month, the busiest of his life, he says. He was performing every week, sometimes even on weekdays. He performed in corporate functions and South African festivals such as Midmar and Groundzero.

Things are slowly changing, but in the past a lot of Swazi musicians were singing in Zulu, because South African music is just that big in the country, so the influence is inevitable. One artist who made singing in SiSwati cool is the successful soul singer Bholoja.

For Sands, it was a conscious decision to sing in his mother tongue. “I thought I would have more opportunities than any other languages,” he says. “SiSwati is also an official language in South Africa, but it hasn’t been explored much, such that people in Mpumalanga are like, ‘Oh wow, thanks, man, finally we have something in SiSwati, now we can’t be looked down upon.'”

Sands’s eponymous album Sands Of Time, which “Tigi” and “Vuma” are on, sounds like money. Save for “Tigi,” most of the songs are slow to mid-tempo. It’s calming music you want to relax to in your room in the evening, the type of music to hear in a jazz club.

Sands is aware that his fan base is mostly young adults who have a refined ear and an understanding of his subject matter, which mostly revolves around relationships, and he’s serving them so well.

He’s looking to drop more singles and perform more in 2017. In the meantime, if you're in Swaziland or South Africa, simply turn on your radio for more.

Stream and purchase Sands' "Tigi" on iTunes and Spotify.