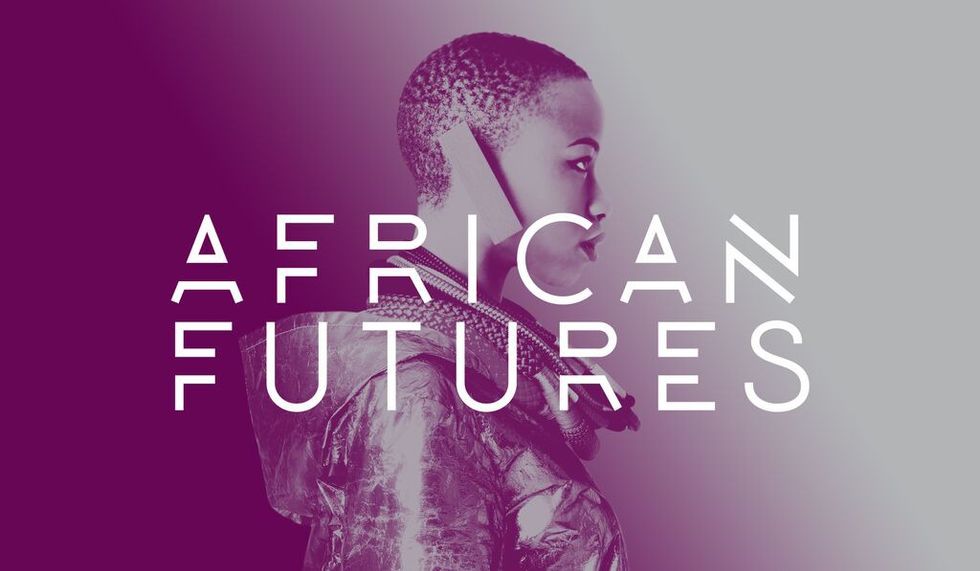 Raimi Gbadamosi on "blackness and why science fiction might hold the answers to the multitude of problems facing the black nation."

Today through October 31, Goethe-Institut South Africa is bringing over 50 international guests–including Binyavanga Wainaina, Spoek Mathambo and his newly formed Batuk project, Achille Mbembe, Wangechi Mutu, Nnedi Okorafor, Selly Raby Kane, Jim Chuchu and Just A Band–to Johannesburg for a series of events around the theme of African Futures. In the lead-up to the festival, Percy Zvomuya has been writing a series of articles for the African Futures tumblr. The following interview previously appeared there in an earlier form.

A discussion on Afrofuturism is never complete if the ghost of American science fiction writer Octavia Butler doesn’t make an unannounced visit. In my hour-long talk with Wits University professor Raimi Gbadamosi, the writer’s celebrated essay Positive Obsession soon came up for a dissection.

In the essay, Butler, who died in 2006, sets out the reasons why she became a writer and why she chose to work in the science fiction genre. Butler wrote that she was often asked what good science fiction was to black people–her response came in the form of a question:

“What good is science fiction’s thinking about the present, the future, and the past? What good is its tendency to warn, to consider alternative ways of thinking and doing? What good is its examination of the possible effects of science and technology, or social organization and political direction? At its best, science fiction stimulates imagination and creativity. It gets reader and writer off the beaten track, off the narrow footpath of what everyone is saying, doing, thinking-whoever ‘everyone’ happens to be this year. And what good is all this to Black people?”

In our conversation, Gbadamosi, a conceptual artist and writer based at the University of Witwatersrand’s School of Art, expanded on the theme of blackness and why science fiction might hold the answers to the multitude of problems facing the black nation. “Science fiction isn’t a genre that people focus on greatly in the imagining of what it means to be black.” Perhaps it is so because it is a genre long dominated by whiteness. Indeed, pioneering black American writers such as Delany and Butler have long complained of racism in the genre.

Raimi Gbadamosi speaks at 'They came from outer space,' the exhibition he curated as part of Goethe-Institut's African Futures in Johannesburg. (Photo: Setumo-Thebe Mohlomi © Goethe-Institut)

Gbadamosi mentioned Logan’s Run, a 1976 dystopian movie set in 2274 which doesn’t feature black people, District 9 and its caricatures of black characters (“go and see how blackness is constructed and this is a film set in South Africa”;) and the spear-wielding black tribes people in Independence Day. About Logan’s Run, Gbadamosi said, “there is a way of imagining a future in which black people are absent.” Or, if they are present, they are appended onto white superheroes as in the initial franchise of Men in Black.

It’s not only on film in which blackness is absent or an afterthought. The real world is similarly unkind. “To be black on this planet is tough,” says Gbadamosi. "The world has stacked all the odds against blackness. This is not a pity party, I am just looking at the realities.” From this recognition, Gbadamosi explained that something has to emerge, and that something is Afrofuturism, “where the understanding is that there has to be something else.” The visual images and forms that are pulled under Afrofuturism are part of this response to the bleakness of black life and the possibility of another future. Yet Gbadamosi is keen to emphasise that Afrofuturism isn’t just an art movement.

“The past-slavery, colonialism, neo-colonialism- has been bad for black people; the present has been a series of attempts to fix the mess of the past, so we better move into the future where somehow we have managed to work things out,” says Gbadamosi. He then suggested that it’s perhaps why musician Sun Ra used to claim another, extraterrestrial, origin, because he couldn’t see how he could be a certain kind of person under the existing conditions.

A member of the curatorial board of the upcoming African Futures conference in Johannesburg, Gbadamosi has curated an exhibition that features the work Loyiso Mkize, the artist behind the high-flying “African superhero” known as Kwezi. When I quizzed Gbadamosi about Mkize, the curator hesitantly began: “I don’t know what he is trying to do but I have my own reading of what the comic has come to represent. I don’t think we need an African superhero, but we may need a superhero who comes from Africa, or from Joburg or from Kampala.”

The curator then went into a brief disquisition about superheroes and how they have always served whiteness. Black people, on the other hand, were always portrayed as the anti-heroes. “If a superhero emerges in Joburg he has a peculiar role. His role is inspire possibilities, that’s what superman does…Do we need an African superhero? No, we need lots of superheroes that populate the landscape and inspire kids to read …and inspire the impossible.”

On the day we spoke, Gbadamosi had just conducted a class on Fanon’s essay, On National Culture. Fanon is, in some ways, an African intellectual superhero. Gbadamosi drew nuggets from his lecture earlier that day. “I was teaching On National Culture…and [black] people have been told over and over that you have nothing and after a while you start to believe that you have nothing. And then you spend time defending yourself that you have something. At some point we have to stop saying we have something. We no longer need to say we have something. We need to simply move forward. And as we move along, at each [stage] we come to an understanding that technology isn’t anyone’s domain. Technology is available where ever we look.”

Anathi Bukani sets up part of 'They came from outer space' as part of the Goethe-Institut South Africa's African Futures in Johannesburg. (Photo: Setumo-Thebe Mohlomi © Goethe-Institut)

Gbadamosi’s eyes have been roving in the general direction of the multimarket in Johannesburg, home of African traditional medicine. “Medicine is a form of technology. Most people don’t consider the formulations in the mutimarket as technology. ” He then bemoaned how African medicine isn’t documented in the ways medicines from other parts of the world are.

Turning back to technology, Gbadamosi said, “when we think of the geek, we rarely think of someone as the geek from this continent. This university isn’t going to look for the geek out across the Mandela Bridge. I can certainly say there are people out there fixing computers. They know the components, how the thing works and how to configure them. Yet when one thinks of the word technology one rarely thinks about going into the city. One thinks of things coming [from elsewhere], vacuum packed, in containers, on a ship. The idea of technology has to change: where technology emanates, what it represents, what it means.”

This was a cue to talk about photography, a popular art form on the continent, “yet no cameras are made here.” He continued, “the way the images are constructed or consumed has already been predefined. I argue about the meta-language that is [used] and [we] just fit into that language. Whoever produces technology has a say in how that language is used. There are parametres to technology: what it can do, what it cannot. Until, continentally, we decide on innovation and technology or how we make things, we won’t be defining the parametres.”

Now living and teaching in South Africa, the Nigerian-rooted, UK-raised and educated Gbadamosi is one of the few intellectuals to come back to live and work in Africa. Most, in fact, make the reverse journey to the global north. “You can’t hold it against them when someone comes and offers them 20 times what they earn, a house and state of the art research facilities. It’s not as if people are rushing to the airport at once. It happens gradually, so one doesn’t notice it. This [emigration] affects the way we negotiate technology and how we view it.”

Percy Zvomuya is a writer, journalist and a football fan. He is also a co-editor and co-founder of The Con, a Johannesburg-based writing collective. In 2014, he was a co-judge in the Caine Prize of African Writing. In that year also he was a recipient of the Miles Morland Fellowship. He has written for several publications, including Africa is a Country, Chimurenga, Mail and Guardian and Sunday Times.