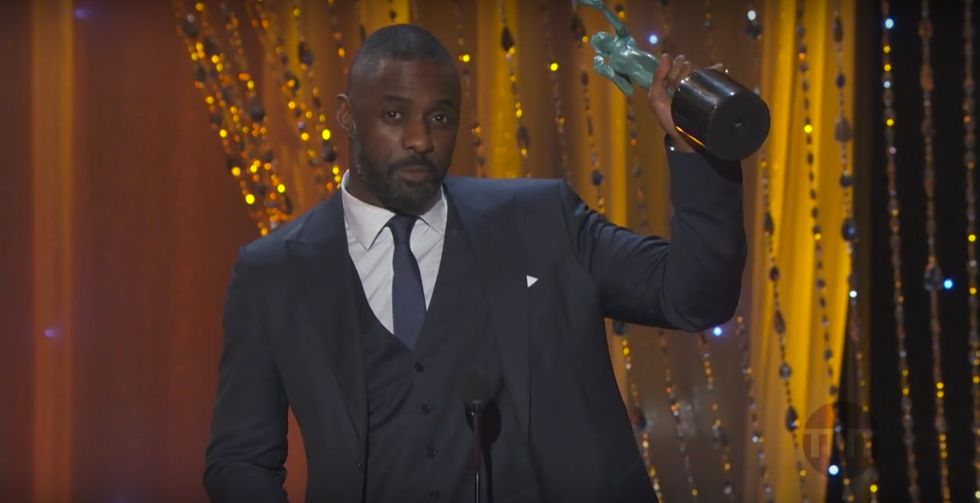 Idris Elba took home two awards at tonight’s Screen Actors Guild (SAG) Awards in Los Angeles: Outstanding Male Actor in a Supporting Role for his performance as the brutal Commandant in the Cary Fukunaga-directed film adaptation of Uzodinma Iweala’s Beasts Of No Nation and Outstanding Male Actor in a Television Movie or Miniseries for his title role in the BBC detective series Luther.

“I want to tell you man, we made a film about real people and real lives,” the British actor said during his first acceptance speech of the night. “To be awarded for it is very special because a lot of people were damaged through that. So thank you for giving this film some light.” He also thanked the film’s Ghanaian cast and crew. “They worked so hard, and I’m really proud.”

Watch both of Elba’s speeches below.

And for the second year in a row, Uzo Aduba took home the SAG Award for Outstanding Female Actor in a Comedy Series for her role as Suzanne "Crazy Eyes" Warren in Orange Is The New Black. “I would like to take an opportunity to acknowledge the actors who are at home, not here in this room with us but hoping to one day be in this room with us -- keep trying, keep plugging, keep working, no matter if anybody tells you to get out of that line that you're waiting in," the Nigerian-American actress said during her acceptance speech. "Stay in that line, you have the chance, it is yours. Thank you so much, God bless you all."

Aruba took the stage for a second time tonight when Orange Is The New Black won the SAG Award for Outstanding Performance by an Ensemble in a Comedy Series.