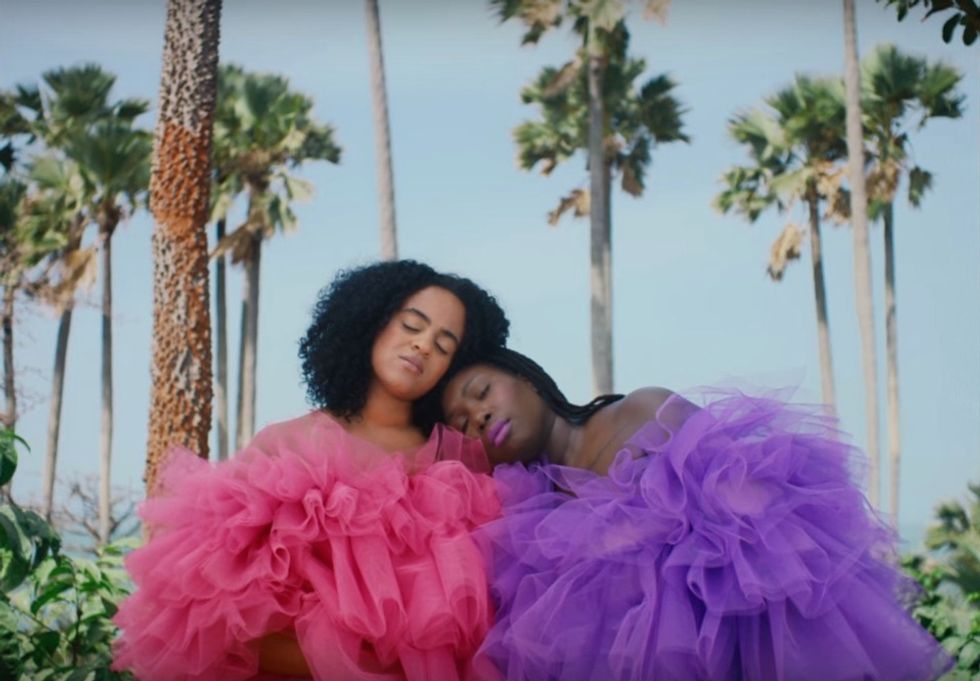 We talk to the singer-songwriter about her Gambian-shot video for "Breathe."

She's done so through two impressive EPs and a solid 2015 debut album, Pretend, which earned her a Swedish Grammy Award for Best Newcomer and Best Pop.

Seinabo Sey is now returning with the new single, "Breathe," an orchestral string-backed song about self-love and self-acceptance, which the Swedish-based singer wrote while on a trip to Dakar.

She mentions that she felt at ease in Senegal, but couldn't quite pinpoint why until she realized: "I love it here because I don't have to explain myself to people... I realised that as a black woman, so much of our time is spent explaining obvious things about our culture or ourselves, when she would rather just be."

With that in mind, the singer traveled to her father's home country of The Gambia to shoot her new music video, enlisting the help of three childhood friends and their daughters.

Watch the beautiful video, directed by Sheila Johansson and NewLand, below and read ahead for our chat with Seinabo Say about the inspirations behind "Breathe."

How did "Breathe" come about?

I wrote it in Dakar, Senegal. I was just at a point where i didn't know what to write anymore and didn't know what my album was about. So I went by myself on a vacation. Dakar is really different. I was feeling kind of lonely and a little out of place. Everyone speaks French and Wolof there, and I don't. Still i felt like I was supposed to be there. With that in mind took a paper and pen and wrote down exactly why i wanted to be there and why I liked being there and the words just came out in the simplest form.

You use a Kwame Nkrumah quote, "Forward Ever, Backwards Never," what made you add that to the lyrics?

I'd heard my dad say that a lot when I was a kid. Actually Gambia had a dictator [Yahya Jammeh] and when they changed the government [now under Adama Barrow], the Minister of Education position was given to one of my old principals. In one of his speeches, my old principal's last words were "Forward Ever, Backwards Never" so I googled those words and found out it was a quote by Nkrumah.

What's your connection to The Gambia? How has that influenced your music?

I think it's influenced me in ways that I haven't analyzed because it's just natural. The older I get, I understand. If you'd asked me years ago I'd say I loved American hip-hop and things like that. But singers that I love from America sound like West African singers, so the older I get I kind of start singing like my dad in that West African tone to his voice.

Your father was a musician as well...

My father passed away five years ago. He was singer and performer. He tried to have a career in Europe but it was hard. He was really passionate about it.

Tell me about going to The Gambia to shoot this music video.

I thought it was fun, although I think the people that I took there and tried to have schedules thought it was frustrating [laughs] . It was great though. Everyone tried to step up and have organization. It was beautiful and I really wanted to show these images. If all my hard work was a poster it would amount to something like this. It didn't feel like a challenge because of all the fun we had. I had the time of my life. I don't think I've ever been as proud of anything else that I've done as much as this music video.

You chose an all-female cast for this video.

There's so many things that we black women have to go through. Everything in our lives from explaining our hair-dos, to not finding our foundation colors. Its not easy to live, specially in Europe cause we're so far behind, even more so than America. When I go to Africa, I really feel like I can breathe, I can feel the air blowing in my mind. I'm always special when I'm there. But I'm also not from there either, and I get privileges that I'm afforded, I'm aware of them. The music video's meant to represent an abstract place where women can be free to be honest. Therefore we have the big fluffy dresses and we can not care about our looks. It's a mind set.