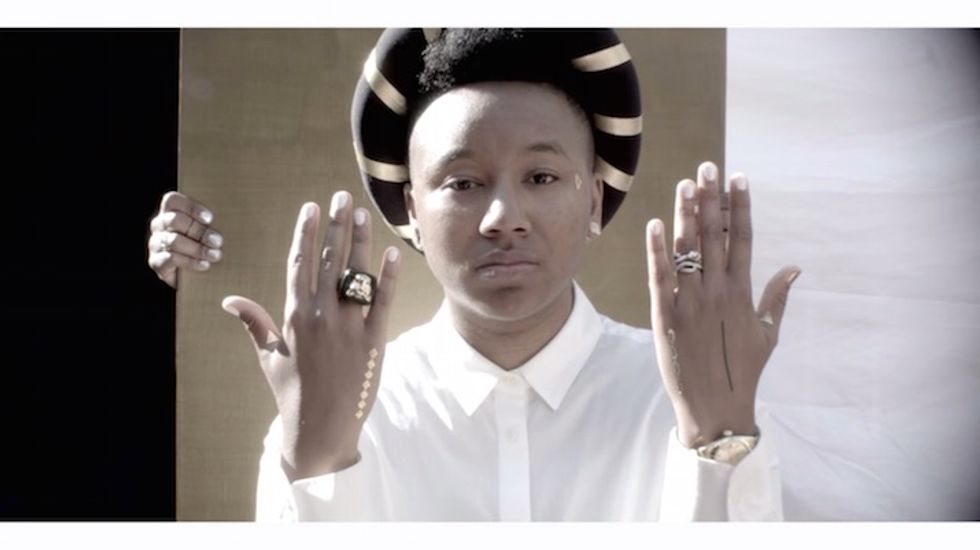 This past week, Seattle genre-melding duos and Sub Pop labelmates Shabazz Palaces and THEESatisfaction each dropped a deeply unique music video. The mellow doom of Shabazz Palaces' "Forerunner Foray," off their recent Lese Majesty LP, comes to life in a darkly vibrant video that features original drawings by musician/artist Chad Vangaalen. Over drum thuds and electronic whirs, the viewer initially lands on a neon-lit neglected street but then goes through a fantastical outer space of a 2001: A Space Odyssey-esque Star Child, a pizza-riding Magic Johnson, galloping horses, and a mirage of faces.

The absorbingly confounding nature of this piece is also found in the official visuals for "Recognition," the tensely quiet first single from THEESatisfaction's forthcoming EarthEE LP. Directed by Philadelphia-based filmmaker/visual artist Tiona McClodden, the video is an intriguing mix of starkness and warmth, placing stern faces against sunny walls and combining rigid postures with relaxed dances. McClodden compares these images, as she explains in her artist statement about the piece, to "Ancient Egyptian sunken relief sculptures," and the video does share the same staid beauty of those artworks. As Okayplayer previously reported, the video is also an engaging melding of the African-American artistic past and present as it has THEESatisfaction attending the homes of the late John Coltrane and Sun Ra while featuring profile shots of such contemporary figures as artist/designer Xenobia Bailey. Check out the two videos below. Shabazz Palaces’ Lese Majesty is out now and THEEsatisfaction's EarthEE will drop on February 24th, both via Sub Pop.