“I’m Not the J.Cole of South Africa, I’m the Shane Eagle of the World” 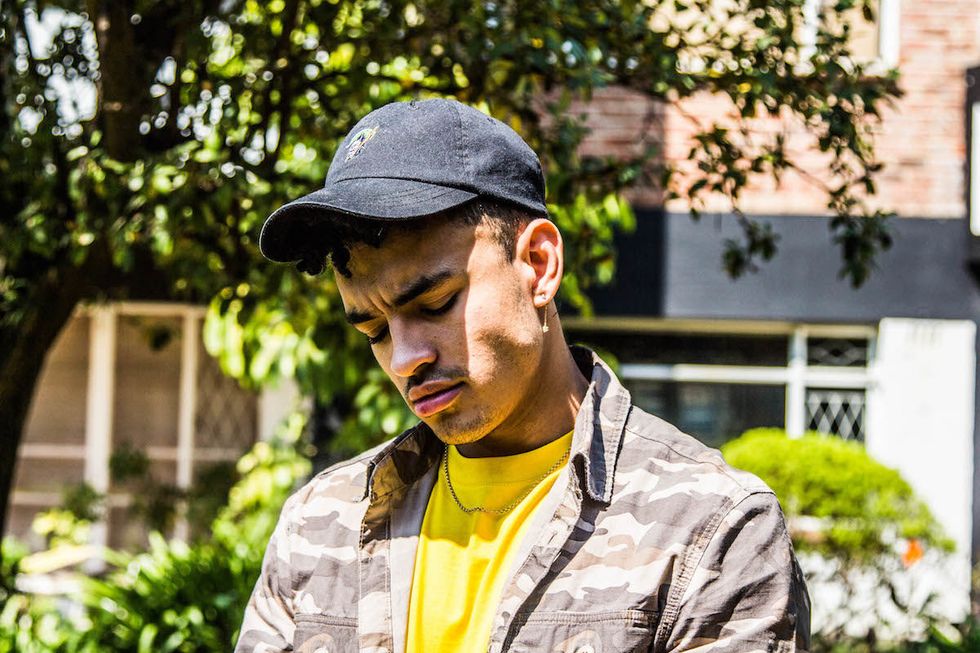 An interview with buzzing South African rapper Shane Eagle, who's forgoing the music industry and forging his own lane.

The South African rapper Shane Eagle's recently released debut album, Yellow, puts him in his own lane. It's a highly personal project and a sonic departure from the prevalent trap production that most rappers in South Africa favor. Only two songs on the album have trap sensibilities. Most of the album leans towards boom-bap with warm textured pads and mellow keys forming its soundscape.

Unlike most rappers who fall under the dreaded “conscious" umbrella, Eagle has a solid fanbase. He steals the show be it on a huge festival like Back To The City or Hipnotik, or small scale concerts like Boogie Boutique and Sneaker Exchange. He has fans rapping along to every word, as he infects them with an existential energy.

Apart from being a talented lyricist, what makes Shane Eagle special is that he is playing by his own rules. While artists are signing with labels, he prides himself on being independent, which looks like it's working wonders for him.

“I feel like at this point, signing for me is not an option unless it's more like a partnership," says the rapper, as he sits on a couch in the studio in which he recorded Yellow. The studio doubles as an office for EagleEntertainment, the company he co-founded. The room is minimally-decorated, with hints of yellow on parts of the walls and the ceiling. On the walls, there's also framed artworks of some of his singles. It's a sentimental space for the rapper, which he refuses to be filmed or photographed.

“I feel like it's 2017, and there's nothing that labels can do that we can't do ourselves," he continues explaining why he chooses to be independent. “It's a new era, we have technology, and everything is so close and easy. So many experiences have made me feel like the music will always do the talking. Labels are so old school. How can technology be moving so quickly yet human beings still wanna be thinking the same? You need to step out of that."

A year ago, the 21-year-old lyricist was just another up-and-comer trying to get his name out, when he found himself on the popular rap reality TV show The Hustle on Vuzu TV. Even though he didn't win the competition, he says it introduced him to the music industry. Things started happening for him after the show as he made appearances on Priddy Ugly's EP You Don't Know Me Yet and DJ Sliqe's album Injayam Vol. 1.

Last year, he spat a show-stealing verse on one of the biggest hip-hop songs of the year, DJ Speedsta's “Mayo," alongside Frank Casino, Yung Swiss and TellaMan. Prior to “Mayo," he appeared on DJ Switch's rappity-rap hit single “Now or Never," alongside revered lyricists Reason, ProVerb and Kwesta. His line “What happened to rap?" on the song's chorus has become a rhetorical mantra for hip-hop purists who feel rap is not as lyrical as it used to be.

With lines like, “Your favorite rapper is a pop star, darling," “Niggas don't rap, they just mumble and shit," on Yellow, he doesn't mince his words about his opinions on rap in 2017. More than anything else, he feels there aren't enough artists who are being honest.

“There's this little industry that's been put together, and it's growing and booming now," he says, “and it's like they have found a way to do stuff, so not enough people have stepped out of that element and said, 'I'm an artist, and I will do what I want.' Everybody just follows everybody; they use the same people to shoot videos, so you end up getting the same product. So when you step out of the box, everybody is so surprised. Everyone is thinking the same, focusing on being a celebrity and coming across as being important rather than being important. Everyone is always too focused on looking like they doing something, when they should be doing something."

Eagle is doing it his way, though. For instance, Yellow was released without a lead hit single. “Julia," the single he released a few months ago, doesn't appear on the album. “There's power in not doing things traditionally," he says. “It's like we are gonna release the track list five days before we release the album. We gonna put all the singles we've dropped on the album. That's how everyone does it.

“But 'Julia' now is a thing of its own. The visual experience, I feel like putting it on the album would have taken away from the synergy. It was never part of the album. It's just a song that we recorded, and I was like people need to hear this. A lot of people told me if they didn't hear 'Julia' they wouldn't be keen to hear the album."

Yellow is a lot of things. It's a statement to the establishment that an artist doesn't have to conform to survive. It's the story of a biracial 21-year-old South African man who has seen both sides of the world. He's giving his listener a first hand account into his fears and triumphs—wearing his heart on his sleeve, and dealing with his vices, while the whole world watches. He gives his views on the world around him unapologetically.

Yellow's a journey in the way it's arranged. It has a few skits and interludes that introduce some songs and create comfortable transitions between the album's varying themes. Listening to Yellow is an experience. There's a skit of a voice note from his woman leaving him at the end of “Can You See," and a phone call with his father at the end of “Empty Highways."

“It's those small things that make it a whole experience," says the rapper. “You can just cut the lights out and listen to the album from start to finish, and feel like you've stepped into my world, this yellow world that's in my head. The music is not a representation of me, I'm a representation of my music. What I go through daily, that's what I talk about and that's how I get an accurate depiction of what's actually going on."

This journey is made even smoother by one main producer, Shooter Khumz, who Eagle says is one of his closest friends. “You get one wholesome sound, but different songs," he says on the album's soundscape. “It's important to keep the synergy between a very select amount of producers because, as soon as beats come from the outside world, it kills that synergy." The other three producers who contribute to the album are Wichi 1080, SP Dubb and Tay Beats.

So, why is the album called Yellow? “It's the color that I think in," he says. “The reason I call the album that is because those are the thoughts that I'm sharing."

Sharing those thoughts the way he does has led to Eagle being compared to rappers such as J. Cole, Kendrick Lamar and Drake, whose music is equally personal and sentimental. He gets it, but also doesn't. “Now there's someone saying something with substance, and the first comparison you draw is someone who is doing it abroad," he says. “Is it because of the color, the delivery, the lyrical content? There are so many reasons why someone would compare me to artists like those. First of all, those are people I look up to, so for someone to compare me to them, it's crazy, but this is Eagle, this is me. I'm not the J.Cole of South Africa, I'm the Shane Eagle of the world."

And indeed, there's a huge chance the world will know about Shane Eagle.