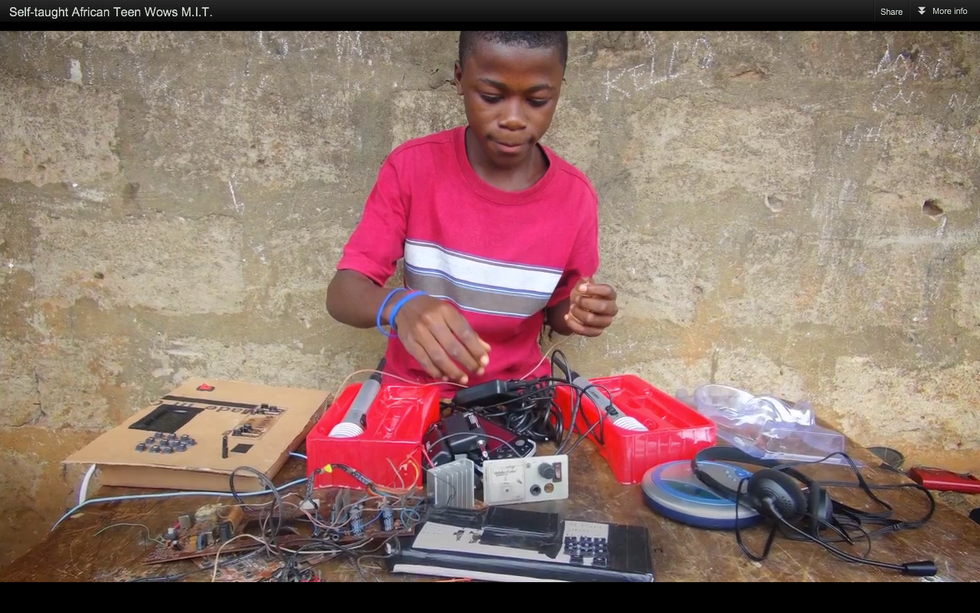 15 year-old Sierra Leonean Kelvin Doe created his own battery to power his household in the response to the lack of electrical power in his hometown.

Kelvin Doe is only 15-years-old, with no official schooling; however, when he saw the widespread lack of electrical power in his hometown, he created his own battery to power his household. He also saw that young people like himself in Sierra Leone needed a voice and a place to express themselves, so he named himself DJ Focus and created his own FM radio transmitter and started a radio station from his home. Only a few weeks after we heard about the four teenage girls from Lagos that created a urine-operated generator, we hear about another incredibly smart teen reverse-engineering old pieces of technology to build a generator from scratch that powers his radio transmitter - uhmazing.

Kelvin's countryman, David Sengeh, a PhD student at the Massachusetts Institute of Technology Media Lab (MIT), gave Kelvin the opportunity of a lifetime by making it possible for him to be invited as a visiting practitioner (the youngest to date) at MIT's International Development Program. For 3 weeks in September, Kelvin was exposed to a world that he has only ever dreamed off, but he handled it with the  same ease and curiosity as he did the old scraps of technology that he reversed-engineered. Kelvin and the girls from Lagos are making a strong statement about today's Africa and the outlook that young people have about Africa's future: it's theirs and they're facing it head-on. Watch Kelvin's story below.