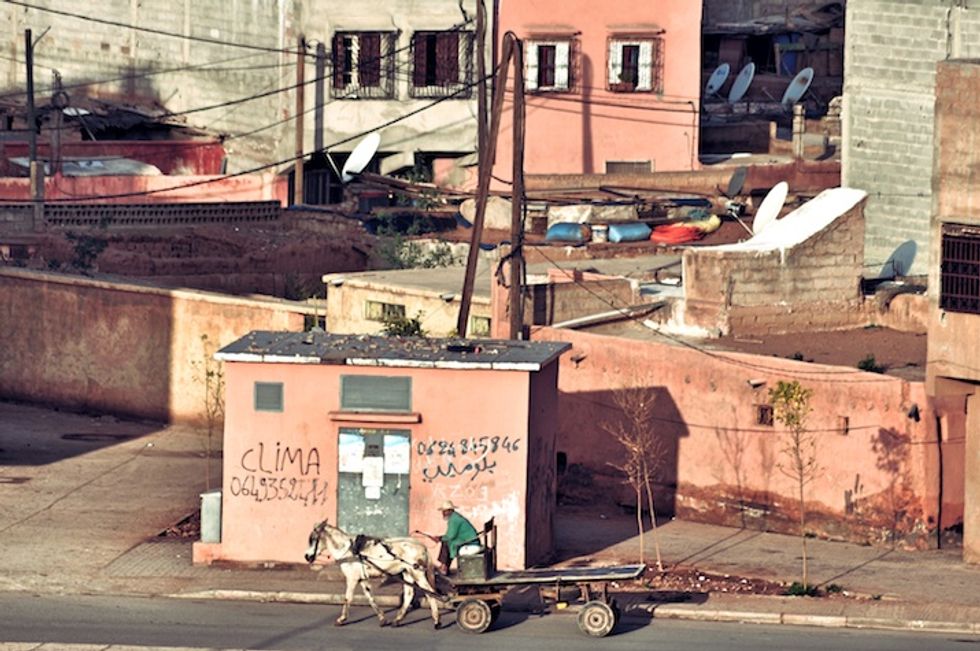 Last week Marrakech-born, Chicago-based photographer and filmmaker Simo Ezoubeiri reached out to us with his latest body of work capturing the intricacies of life in contemporary Morocco. The series, M’hamid 9, was shot from the single point of view of Ezoubeiri's parents' terrace in the small Moroccan town at the edge of the Sahara. "The use of this God’s POV style of framing/shots invites the viewer into myriads of intimate, stolen and fugitive moments of an anthropological physical space," he told us. "The street environment and landscape unfold as unpopulated world. The charm and architectural character of buildings, the streetscapes and signage are shown to help comprehend the hidden aspects of modern suburban life style."

Ezoubeiri says the series is part of a digital photography genre that explores various elements of the inner space of a new suburban Marrakech. "I haven’t been to Marrakech for almost 5 years and I felt an inner need to capture this 'new suburban life' and follow my unconventional method of documenting the scenery around me," he said. "It’s a private vision, covered and guarded with mixed feelings of sadness and happiness that I can’t express with words."

"Marrakech is an inspirational city for many photographers throughout the years," Ezoubeiri tells us of the photo scene in Morocco's fourth largest city, where he's also set a number of short experimental films. "I personally remember the great influence of local photographer, Hassan Nadim, when I first saw his photographs at Foundation Dar Bellarj ten years ago. I found them great and fascinating to look at! Later on, the work of pop artist, Hassan Hajjaj has shown new interpretations of the photo scene in the city. However, the creations of new artistic platforms like 'Marrakech Biennale', 'Digital Marrakech' and the pending 'Marrakech Art Fair' have enriched the photo scene and created a lot of competition between curators and artists. Overall, the photo scene is growing slowly surely since Marrakech has 25 galleries by itself."

Ezoubeiri is currently working on post production for his debut narrative short film, Ladder, which he shot in Marrakech in January. The project will focus on what happens when a woman suddenly decides to leave her husband of 30+ years. Speaking on what he calls a "very personal film," Ezoubeiri says "There is scanty dialogue, unorthodox narrative, little characterization but the intension, of course, is to show what the main character seems and what is affecting his psychology after the sudden departure of his wife."