Olajumoke Orisaguna & The Slum Tourism Debate: It's Time To Rethink How We Portray The Beauty In Suffering 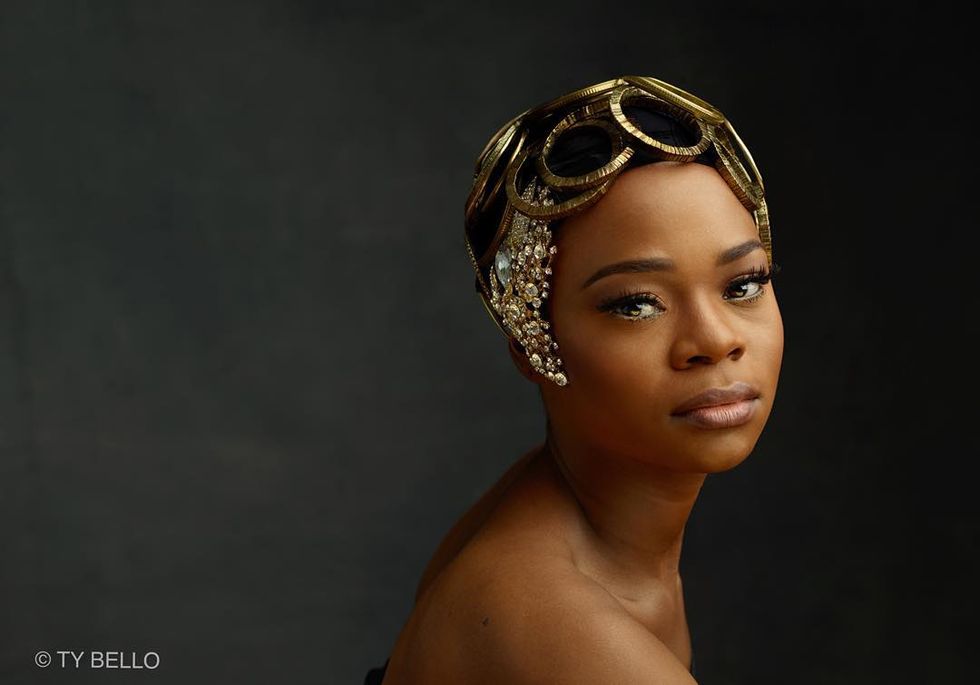 The Cinderella story of bread seller-turned-model Olajumoke Orisaguna reignites the debate over slum tourism, its ethics and its disadvantages

An unlikely hero broke the Internet in Nigeria while most of the online world still recovered from Beyoncé's invention of blackness. In a made-for-TV story, Olajumoke Orisaguna, a street-hawker, accidentally walked into the set of an ongoing celebrity photo shoot. The shot caught the eye of the photographer and she then became a covergirl.

The 27-year-old mother of two, who moved to Lagos in search of greener pastures in the big city to support her husband and children, trekked her usual route, selling delectable agege bread. Photographer TY Bello was in the process of a photo shoot with British-Nigerian hip-hop superstar Tinie Tempah in the streets of Lagos, when Orisaguna mistakenly stepped into the shoot. People hardly noticed Tinie Tempah in the published photos on social media — Orisaguna caught the attention of adoring fans instead. They wanted details of the bread-selling model in the photograph. Since she wasn’t a model, she didn’t sign a release and neither the photographer nor anyone associated with the shoot knew who she was or how to find her. Bello even admitted she didn’t know she had nailed the narrative until she edited it a few days later.

BEATIFUL MISS X:WHO IS SHE.?Every one has been asking if this lady is a model .. It was just perfect coincidence ... She just happened to be walking by while I photographed . It happened so fast .She definitely SHOULD be a model. .. I'm happy to help her build a portfolio if she's interested .She's so beautiful and photographed so well. I'll find a way to track her down somehow . You guys can also help #lagos #doesanyonerecognizeher #okunorentwins #tinietempah @thisdaystyle #lagos

The inquiries sparked a reconnaissance mission by Bello, who eventually found her, made her over and photographed her for an editorial cover on her usual column in the country’s largest weekend magazine, This Day Style. Her inspiring story of accidental fame and the accompanying images quickly went viral. Bloggers and individuals alike shared and celebrated Orisaguna as divine intervention. A modeling agency signed her and she caught the attention of online retailers, movie-makers and any and everybody seeking to ride the wave.

To an extent, it also reignited the debate over slum tourism, its ethics and its disadvantages. While this ‘Cinderella story’ appeared to have a happy ending, it is worth noting the millions of inspiring stories that go untold and the millions of passersby who remain as intended props without compensation or recognition. Entire neighborhoods lose their dignity over artistic expression or a foreign artist’s desire to appear like the common man. While we usually think of slum tourism as a dirty phrase reserved for foreign visitors who invade poor neighborhoods to take poverty porn photos to fit and perpetuate existing narratives, the history of the trend itself shows that locals are as much to blame as foreigners.

For almost as long as still-photography’s existence, the fascination wealthy people had with poor neighborhoods or slums to see and document how their modest counterparts lived, attempted to draw attention to and, consequently, help improve their circumstances. In September of 1884, the New York Times ran an article called, “Slumming in this Town: A Fashionable London Mania Reaches New York,” where they celebrated the arrival of the “slumming” trend. Hordes of wealthier New Yorkers took sightseeing trips to the Bowery neighborhood in the Lower East Side. In the following decades, the trend made its way around the globe in search of more exotic locations. In South America, the favelas in Brazil became one of the more popular tourist destinations. Tours to the Indian slums of Mumbai inspired an Academy Award winning movie, Slumdog Millionaire. In the Western Cape of South Africa, the township tours started out as a means of enlightening white South Africans in government about the real life ramifications of Apartheid. These tours now attract about 300,000 international visitors every year. With the growth of social media and global travel culture, slum tourism spread to cities in most developing countries — including many in Africa.

Slum tourism became the subject of scholarly debates since its advent. These tours mostly were altruistic in their intent. They meant to educate outsiders on the living conditions of the poor, to bring attention and resources to these struggling neighborhoods, to challenge misconceptions of slums residents as criminals, and break down negative stereotypes. Proponents suggest the tours provide employment and income for tour guides and craft workers from the slums, which benefit the slum economies.

On the other hand, detractors complain that the practice turns poverty into entertainment, something that can be momentarily experienced and then left behind. But in the age of social media, the practice has spread uncontrollably and has a wider reach than ever. While it might be tough to characterize Orisaguna’s story as slum tourism, it certainly has all the elements. Tinie Tempah’s photo shoot didn’t appear to have any rationale or by-product beyond personal promotion, while relegating the inhabitants (including Orisaguna), their stories and their circumstances to the backdrop.

As we continue to celebrate this notably inspiring story, it is important to note that very few stories end up positively. In 2013, hip-hop recording artist Rick Ross shot an alternate music video for his song “Hold Me Back,” in Lagos, Nigeria. The gritty video shot on location in the Lagos streets featured some of the roughest parts of the city. It embodied every stereotype of what life in an African city is like that the West still imagines: garbage ridden streets, stray goats, people hawking goods and crying babies.

Unlike Orisaguna’s story, Rick Ross’ video garnered severe backlash from Nigerians. Few dismissed the video as just artistic expression, while supporters defended his intent by pointing to the original version shot in a similar neighborhood in New Orleans. Others excused him by referencing that the video merely depicted the unfortunate reality of everyday Lagosians. Most people, however, were not as understanding. They took offense to the one-sided depiction of Lagos. They thought at a time when the city, the country and indeed the continent invested heavily to combat the negative perception of the continent as one big slum, these depictions served to undo those efforts. Kennedy Odede, executive director of the Kenyan social services organization Shining Hope for Communities, captured the sentiment perfectly in his New York Times op-ed, “Slumdog Tourism,” when he said, “Slum tourism is a one-way street: they get photos; we lose a piece of our dignity.”

More troubling than the voyeuristic exploits is the snooty narrative of these neighborhoods holding a certain kind of beauty and should be celebrated and preserved. I’m all for artistic expression and concur that there is certainly beauty in all things, however, I profusely disagree with the notion that dilapidated buildings, broken down cars, neighborhoods with poor sanitation, and crumbling infrastructure, however colorful, are celebration-worthy. I don’t want to preserve poverty so tourists can take artsy photos or hip-hop stars can shoot gritty videos that help them uphold their fictional tough-guy reputations.

I don’t imagine that we’re going to end a trend that persisted for 150 years overnight. I don’t imagine we’re even going to agree that the trend is in fact troubling. But, what we can agree on is when we are welcome into any community, we have a responsibility to tell their stories in a sensitive way and in a way that serves to benefit said community. To that end, here are my simple prescriptions.

If we’re going to visit and photograph these undeniably picturesque communities, courtesy demands we obtain proper permission from the residents and human subjects as you would anywhere else.

If we’re going to craft a narrative, written or visual, apply proper context for your audience. Most importantly, use the images as a means of exposing the inequities in society and telling the stories of disadvantaged communities, so that it can lift these communities and not just lift people out of them.

Because truth be told, while this makes for a very beautiful and inspirational story, the chances of a 27-year-old mother of two with no experience, and a less than solid handle of the english language, making it as a model or actress in Lagos are very slim.

Ernest Danjuma Enebi is managing partner at Denda - a New York Based brand design and growth hacking company. He is also a social activist, commentator and culture critic. Follow him on Twitter @TheDanjuma.