SMOD Speaks Out About The Unrest In Mali 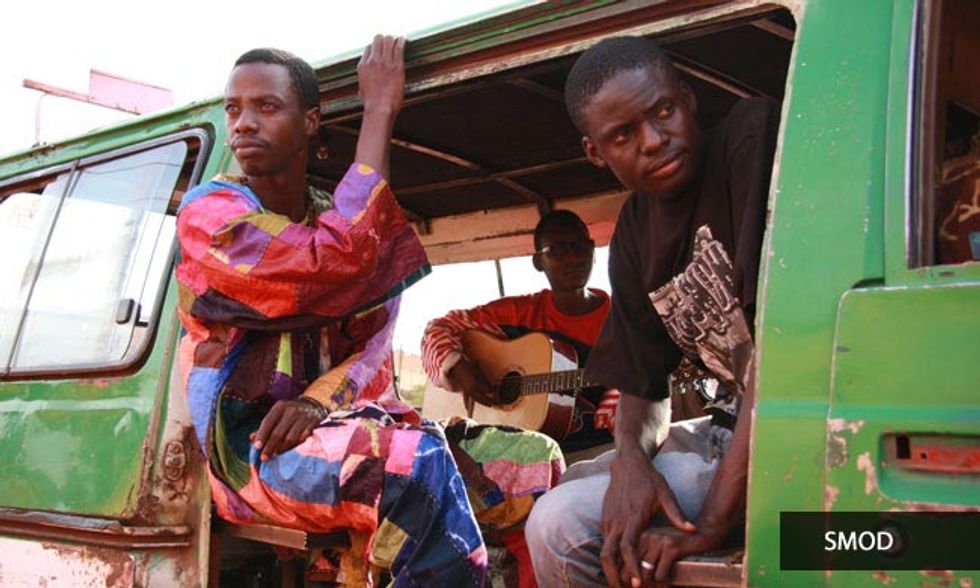 Malian hip-hop trio SMOD discusses the situation that “no one seems to know what to do about,” and how it has transformed daily life in Mali.

There's no question that the conflict in Mali is complex. A military coup in March 2012, led by mid-level army officers, interrupted what would have been regularly scheduled democratic presidential elections. The military junta was unhappy with the sitting president because of mismanaging the 2012 Tuareg Rebellion – a continuation of a conflict dating back to 1916 between the Tuareg people and the Malian government. The division in Mali and subsequent unrest has created a humanitarian crisis. We asked Malian hip hop trio SMOD about the situation that "no one seems to know what to do about," and how it has transformed daily life in Mali.

The history of instability in the North of Mali did not begin yesterday, it is necessary to go back well before the 90s, to the year of the democratic transition in 1992.

Since the independence of Mali (September 22nd, 1960) the populations of the North have complained of isolation since all the administrations are situated in Bamako in the South (hospitals, universities, Embassies). The political power centralized in Bamako had a responsibility in the uprising of a part of this population mainly constituted by Tuareg. We're anticipating the creation of the "National Movement for the Liberation of ASAWAD" (MNLA) which has the objective to divide Mali into two separate countries, we regret it and wish that both sides would listen and understand each other.

In addition, part of Mali is crossed by the big Sahara desert, this big desert is a zone of no law and is unchecked, which is difficult to be controlled by the states which it crosses. It has become an El Dorado, a real refuge for the Islamists and the mercenaries of all kinds who came from wars all over Africa and the Middle East. These two phenomena cross themselves on the same territory now-a-days and make this situation very explosive...

2. What are the most pressing issues for Mali's citizens?

Today the main goal of the Malian citizen is to free the North from those occupying it so that Mali can recover its territorial integrity. Once this integrity is recovered, the power centralized in Bamako will have to develop the North of the country and help the on-the-spot populations with real food, educational and sanitary policy.

3. Do you resent the military coup that interrupted the democratic elections that were scheduled in early 2012?

Yes certainly. We think that this military coup was not useful. Mali was a democratic state quoted as an example in Africa. Today, we are ashamed of this recoil. But we underline here that we do not forget that the fallen power has an important part in the reasons of its own fall. The government's inactivity caused the military coup. This military coup makes the foreign investors run away, the unemployment thus increases, the infernal spiral is engaged. The Malian people, the peoples of Africa are tired of their leaders. We try, through our music, to explain to Malian people that our future is in our hands.

4. How did it feel to come home after your visit to the U.S.?

We are just on our guard, and it is normal that we are vigilant because of the presence of the Islamists in the North and the divided army in the South. We are still hoping that things calm down and are going to be sorted out fast, by means of the international community if needed to solve an international problem which is one of the difficulties to control the Sahara desert.

5. Who is benefiting from the conflict in Mali?

Nobody takes advantage of this conflict… the Islamists* are extremely violent, they are criminals disguised as monks. The Muslim religion does not teach the terror but the love and the tolerance. This conflict does not benefit the populations of the South and even less the populations of the North. The Islamists destroy our culture, forbid the young people to play football in the street, impose the “Charria” … Who can be benefit from this?

6. How will/does the conflict affect daily life in parts of Mali?

The Malian government does not manage to forward foods to the populations which need it. These populations suffer. Since the events of March 22nd there has been a massive departure of the economic partners of the country who are afraid that the situation degenerates. The unemployment settles down, foodstuffs become scarce, everyday life becomes more expensive, our people suffer.

7. A member of the group Tinariwen has said that the media is misrepresenting the Tuareg's as troublemakers in the conflict. Does this hold true? What is the role of the Tuaregs as you see it?

The Tuareg are Malian in the same way as other ethnic groups who compose Malian people. The agitators are not only Tuaregs. To denounce the Tuareg is to stigmatize them. It is a serious and wrong thing to do. In the country, things are complex and tangled. The Tuareg want more gratitude, it is necessary to listen to them, they have to discuss with power centralized… But the power has to have the capacity to do it.

8. Do you think that Mali in general gets a bad rap in Western media? Sometimes it's represented as a place of kidnappings, insecurity, and violence.

Mali will always remain a ground of hospitality- its image is soiled today of course but the kidnappings and the violence remain rare and we do not doubt that things will settle fast. It is a necessary thing to continue loving our country and not to be afraid of it.

9. What are the top 5 greatest things about Mali?

The Sun, the Malian hospitality (which is an example in all of Africa), in spite of the poverty we keep smiling, our culture, Malian music and finally our slogan: "people, purpose, faith!"

For more information on the conflict in Mali go here.

*Islamists to be distinguished from Islam.