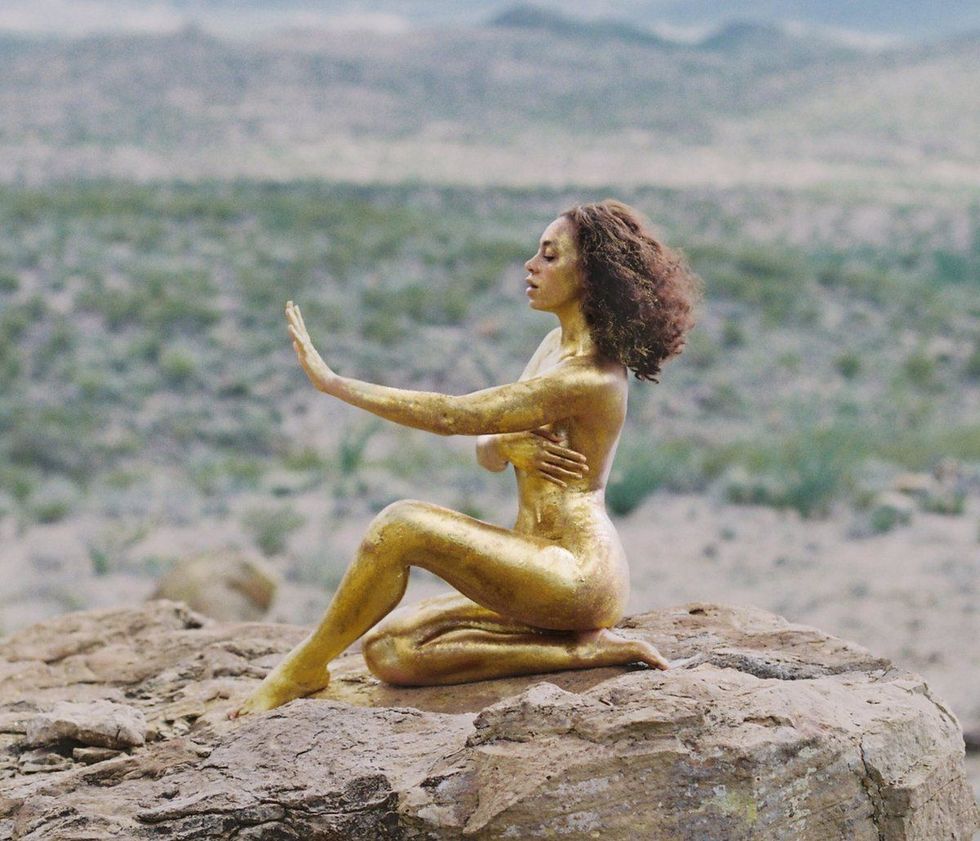 In this review of Solange's new album, Gina Cherelus shares how this release came just at the right time for her and for the black community.

When you need something the most, the universe will often find a way of sending it to you.

When Solange released her second studio album, Sol-Angel and the Hadley St. Dreams in 2008, I was in high school—old enough to fully appreciate the early talents of the Houston-native. Between songs like "T.O.N.Y.," "I Decided" and "Cosmic Journey," her record was one of the things that helped me come into my own as an introverted teenager, just as she was herself following a divorce and the birth of her son at 18.

In 2012, when she released her True E.P., I had just ended a “situationship,” lost a few friends and was preparing to take a semester off of college to intern in New York City. Her eclectic sound mixed with fervent lyrics helped me get over my issues and remain content with my $1 pizza diet at the time.

This year, A Seat at The Table was released a week after my aunt passed away from cancer, a traumatic experience that forced me to face mortality and think about the neglectful treatment of black women who work tirelessly in America. For that perfect timing, I am grateful.

Solange’s third album in eight years, A Seat at the Table is a force on its own. Before the release, solangemusic.com appeared with a mysterious sign-up page that resulted in 85 of her fans receiving a physical photo and poetry book in the mail days before the record dropped.

But the the music is the real prize here. A mix of fragile melodies, striking interludes and a radical message, the album reflects a profound moment in black history. The album is Solange’s elixir to mend black pain—a 21-track dose of healing. Art suited to helping me through a period of grief.

In “Rise” and “Weary,” the two songs that kick off the LP, Solange begins with a request:

Fall in your ways so you can crumble

Fall in your ways, so you can sleep at night

Fall in your ways so you can wake up and rise.

She follows this by detailing how she plans to look for her body and that she'll back real soon, undoubtedly renewed.

The African diaspora have, for centuries, faced the crippling pain of racism and exclusion. The ongoing issue of police brutality plaguing the United States has driven this message home of late.

Trayvon Martin, Michael Brown, Tanisha Anderson and, more recently—Keith Lamont Scott and Terence Crutcher. All unarmed. All black. With the growing consciousness around the value of black lives in America, Solange has opened a door for unapologetic expression about the fight against racial transgressions.

Using her personal experiences as a black woman, she warns others to “be leery” of our place in the world and continues unpacking the overarching themes of the album: inclusivity, anger, pain, reclamation and power.

Her parents appear on interludes like “Tina Taught Me” and “Dad Was Mad,” where they recount memories of their struggles growing up in segregation and dealing with prejudices. These experiences mirror those of black people today.

Solange paying homage to the elders that came before us not only shows what shapes our lives today, but also points a finger at the poor way black people are treated in our society despite various achievements. On “Mad,” rapper Lil Wayne can be heard alongside Solange defending their right to be angry, so much so that he admits to attempting suicide at one point:

Then I walk up in the bank, pants sagging down

And I laugh at frowns, what they mad about?

Cause here come this motherfucker with this mass account

That didn't wear cap and gown

But the most illuminating voice on the album is hip-hop star Master P. The rapper turned entrepreneur discusses the worth of his blackness in America; the importance of safe spaces and the art that we create that is often stripped, copied and criticized.

"If you don't understand us and what we've been through then you probably wouldn't understand what this moment is about,” says Master P in “Interlude: This Moment.”

Strategically placed alongside the melancholic tone in each track is the feeling of empowerment and Solange makes it clear in my favorite tracks like “Don’t Touch My Hair,” “Cranes in the Sky,” “F.U.B.U.” and “Scales” where she calls for a reclamation of black pride and peace.

In a phone conversation published on saintheron.com two days after the album released, Solange and her mother Tina Knowles joined Judnick Mayard for an extensive discussion of her new music. On “Don’t You Wait,” the seventh track on the album, the songstress proclaims, “Now, I don't want to bite the hand that'll show me the other side,” and juxtaposes with the following line, “But I didn't want to build the land that has fed you your whole life.”

When asked about the song, she said that in past occurrence she has felt suppressed for speaking from the soul, a feeling that many black women face regarding potential repercussions that can come when we dare to express our opinions. “I spoke up on something that did not feel right, and I was essentially told to shut up or there would be consequences,” Solange explained in the interview.

Black people collect microaggressions every day and it’s hard to turn a cheek at the minor things that can grow, fester and turn into bigger problems later on. For some of us, this can weigh heavy for years as we carry the effects of this trauma and pass it onto the next generation. For others, there comes a time where the heaviness becomes unbearable, and we are motivated to gather around with our misery and unload. That’s what “A Seat at the Table” is about—making room in a special space for those who belong to talk about what really matters and begin to heal.