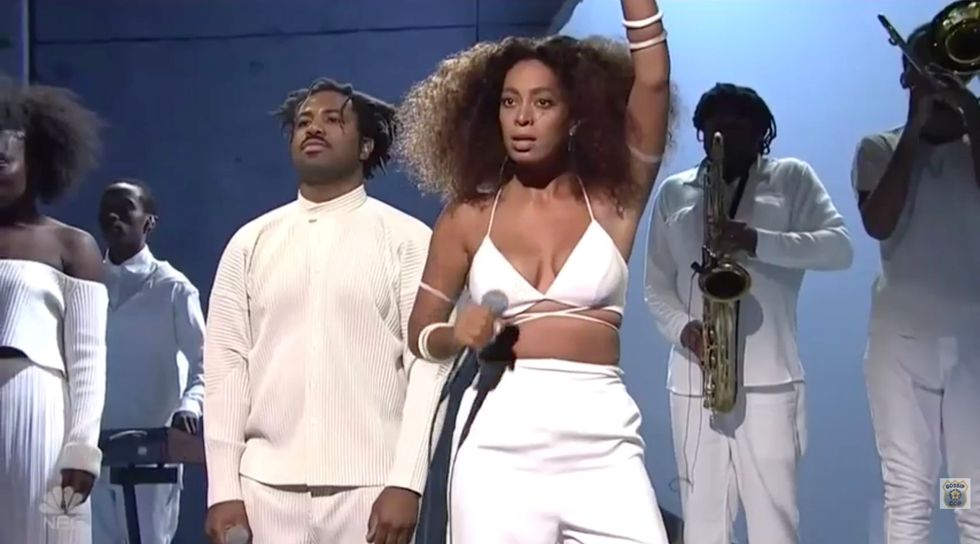 Solange made her Saturday Night Live debut with performances of A Seat at the Table’s ‘Cranes in the Sky’ and ‘Don’t Touch My Hair’ featuring Sampha.

To quote Mike Birbiglia's character in the SNL-themed comedy-drama Don’t Think Twice (which I coincidentally saw tonight), “You never know if it was good when you were little or you were just little so you didn't know. It's the great paradox of [Saturday Night Live] is ‘was it good ever?’”

And while I can’t answer that question, one thing is clear: Solange's SNL appearance was, not surprisingly, really damn good.

The singer was absolutely divine as she made her Studio 8H debut on tonight's Season 42 episode hosted by British actor Benedict Cumberbatch. Backed by a full band, she first performed A Seat at the Table’s “Cranes in the Sky” in a two-piece and halo before breaking out in dance later in the night with an explosive, otherworldly rendition of “Don’t Touch My Hair.” She was joined for the latter by UK singer-songwriter/producer Sampha, who’s having a big week of his own.

Tonight’s SNL appearance was glorious, but it was also one of many recent victories for the younger Knowles sister. Her new 21-track album, A Seat at the Table, sold 72,000 equivalent album units in its first week to take the top spot on the Billboard 200 chart and make a bit of history in the process—Solange and Beyoncé are now the first and only solo artist sisters to score No. 1 albums in the same year.

It seems SNL is hitting a bit of a stride as well. Next up? Dave Chappelle and A Tribe Called Quest (!!!!!!) will serve as host and musical guest respectively on the show's November 12th episode.

Soo proud of my baby on SNL. Right now❤️

Solange is legit on #SNL telling America to not touch our hair. She's doing the Lord's work.

White people saying they don't like solanges music , well it isn't for you anyway ?#SNL#solangepic.twitter.com/NDvITmwb5J

Solange is a star.

Solange slaying Cranes In The Sky on SNL ? pic.twitter.com/AAltTb3KI7

If you don't understand Solange's performances no need to fret cause it wasn't for you in the first place #Solange#SNL ✊?

Solange betta come through, looking like a #BlackGirlMagic Dreamcatcher! #SNL#ASeatAtTheTablepic.twitter.com/GgzTDfc4ts

Do it for the culture one fucking time! yasss @sampha and @solangeknowles performing "Don't Touch My Hair." pic.twitter.com/yfqNqDZFuo