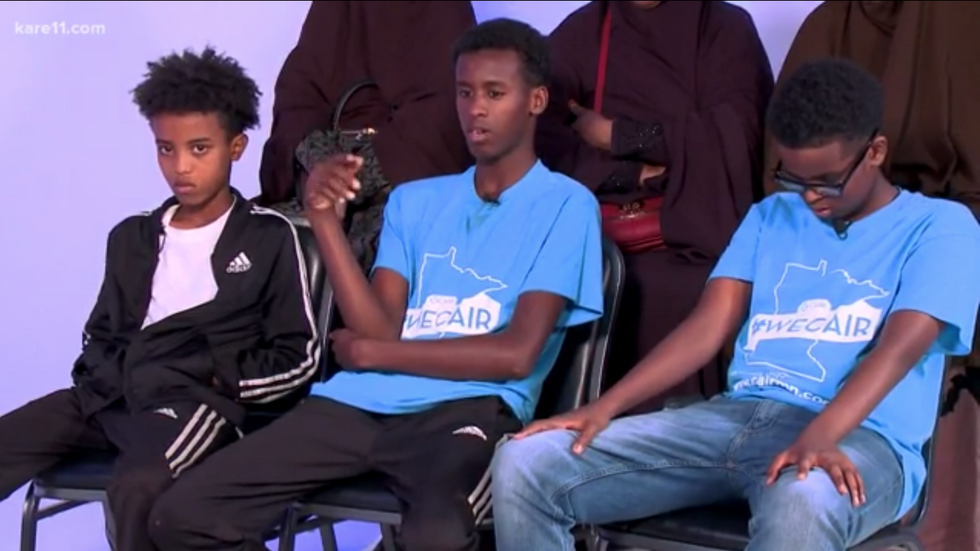 Black Teens say that they were scared it would be their "last day of the world" after the police searched them at gunpoint.

Four Somali-America boys were able to tell their story today after a run in with police and racist assailants in Minneapolis last week that went viral. After being assaulted by a white teen hurling racial slurs and a trash can, the boys were held at gunpoint by the police after a 911 call described them as armed criminals.

All of the black teens are part of the city's large Somali community. Bystanders who were watching said the white aggressor had a trash can, a stick, and also claimed to have a knife. It was a young white woman who made the 911 call falsely accusing the boys of threatening her boyfriend and carrying a knife and a gun.

When police officers arrived at the scene, they searched the black teens at gunpoint before forcing them into the back of the police car. Facebook user Briana Lindell posted a viral video of the incidence and witnessed the teens being harrassed by the white teenager and being confronted by the police. Describing the scene she said,

"Two of the children were handcuffed and in front of the squad car. One was begging for his shirt on the ground because he was being bitten by mosquitos. My partner tossed him his shirt and a cop jumped out of the squad car and started yelling at us that we were interfering with an arrest. I asked the cop why he was arresting the kids as they'd done nothing wrong and he said they had received a call that the kids had a gun."

On Monday, the teens spoke about their experience when the Minnesota chapter of the Council on American-Islamic Relations (CAIR-MN) held a press conference.

Adam Guffe, an eighth grader, described the incidence. "I was at the park. I was just trying to have a good day with my friends." He added, "This white kid just came up to us saying racial slurs toward us. When the cops came, they just put guns to our faces. I felt like I was discriminated [against]. I felt like this was not supposed to happen. I hope it never happens to anyone again."

"I was scared. I thought that would be my last day of the world," 13-year-old Abdijabar Ahmed said.

While the boys had no physical injuries, the incidence has haunted them and their families. Sirat Guffe, the mother of one of the teens Adan, said through a translator, "They treated our children as if they were felons or thugs. Our children are not terrorists. They are not gangsters. They are not criminals. The way that this incident happened has really affected our family. We're still feeling depressed and sick from this incident."

According to Minneapolis Star Tribune, the park board have hired an outside party to investigate the incidence and to see if the park policies were followed by the police. This is one of many other incidences that highlight how easily institutional resources are used to harass black people.
From Your Site Articles
Popular