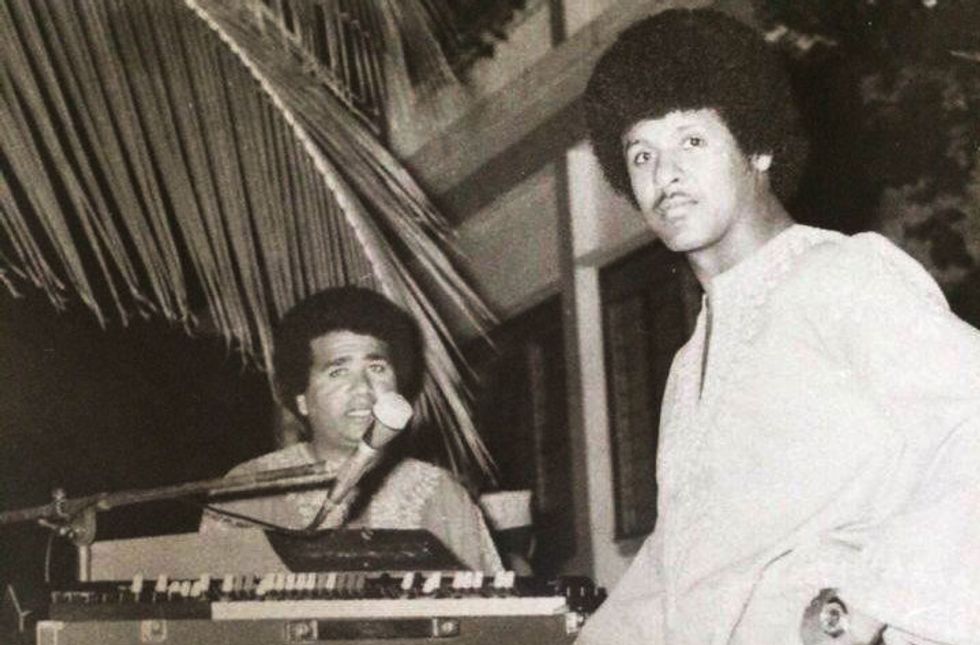 Get transported to 1970s & 1980s Mogadishu in this mixtape of newly rescued songs from Somalia's golden age of music, put together by Ostinato Records.

Vik Sohonie, founder of Ostinato Records, gives us the background on his mixtape 'Somali Sounds from Mogadishu to Djibouti.'

Something remarkable has taken place in the last few years: Somalia has reasserted itself.

Indeed, challenges still remain—and they are grave. But we should not discount how far Somalia and Somali people have come from two decades of civil war, and current ongoing hardships.

Mogadishu slowly but surely has been defiantly rebuilding itself. The airport has been renovated, a strategic seaport is in the works. Presidential elections were held last month, with a peaceful transition of power observed and optimism abound.

To the north, the autonomous Republic of Somaliland has enjoyed stability and peace—attracting a diaspora who fled during the war, now keen to invest in the future. Schools in the dusty capital Hargeisa are graduating Ivy league bound students. From those we met, there is a palpable sense of selflessness in the conference of degrees. A dedication to learning achieves the goals of rebuilding first, individual upward mobility second.

Amid this often underreported revival, brewing just beneath the surface, a concerted effort by Somalis at home and abroad to preserve, restore, and spread their culture, reminding the world of its lush vibrancy before the violence, has begun.

The Somali diaspora in North America, Europe, the Middle East, and elsewhere in East Africa have used the digital tools their disposal—namely YouTube and blogs—to upload their collections. This cultural assertion is a cornerstone of the Somali revival.

In 2015, Berlin-based researched and collector Nicolas Sheikholeslami nimbly scoured the Somali niches of the internet to compile Au Revoir Mogadishu Vol.1, a viral mixtape of Somali music from before the war.

Made speechless by the mixtape’s other-worldly sounds, Ostinato Records and Sheikholeslami traveled to the Horn of Africa after catching word of an archive of over 10,000 cassettes and reels, painstakingly preserved through the war by intrepid radio operators and dedicated vanguards of Somali culture. The archive was rescued only recently and generously made available to us.

'Jerry' and Ahmad Naaji in Mogadishu.

What we discovered is difficult to articulate. But what the music revealed was an untold history of the Somali music belt, which stretches from Djibouti to Hargeisa, all the way down to Mogadishu. Somali culture transcends artificial borders and groupings.

The diversity of styles, the experimentation of instrumentation, and the gumbo of influences opened the chapters of Somalia’s historic relationship with the Arabian Peninsula, India, Southeast Asia, and even China. The historic trading city of Zeila, a powerhouse East African hub during the pre-European Indian Ocean trade made this possible.

The most defining feature of the archive was its ability to transport our hearts and minds to Mogadishu of the 1970s and 1980s, when the coastal capital glistened as the “Pearl of the Indian Ocean,” when wine and cosmopolitanism flowed freely, as one former import-export tycoon born and raised in the city told us.

"...the archive... transport[s] our hearts and minds to Mogadishu of the 1970s and 1980s, when the coastal capital glistened as the 'Pearl of the Indian Ocean,' when wine and cosmopolitanism flowed freely..."
The city, with its iconic ivory-colored architecture, was home to some of the most lavish hotels, ballrooms, and elegant parties in East Africa. The Jazira and Al-Curuuba hotels, their ruins still dotting Mogadishu’s coastline, were home to the finest acts of the day, who serenaded crowds from near and far with their celestial synths, stalking bass lines, haunting horn arrangements, and soaring vocals.

Mogadishu’s nightlife culture was rich and booming. Theatre plays were of vital importance, often where the best music was performed and recorded. Poetry was lionized, the foundation of Somali songwriting.

One of the reels found and remastered by Ostinato Records. Photography by Janto Djassi.

It’s important to remember that Somali music’s golden age largely took place under a socialist government, which effectively nationalized the music industry. A thriving scene was owned entirely by the state.

Music was recorded for and by national radio stations and only disseminated through public broadcasts or live performances. Private labels were virtually non-existent. This music was never made available for mass release. As a result, most of it has never been heard outside Somalia and the immediate region.

"This music was never made available for mass release. As a result, most of it has never been heard outside Somalia and the immediate region."
For the last year, from Minnesota to Dubai, we have tracked down the musicians, songwriters, composers, former government bureaucrats, and quirky personalities that colored Somali music life.

A full-fledged compilation album of the best cuts we discovered in this archive is slated for release this year exclusively on Ostinato Records.

But because we could not wait to share what we have been reveling in, we have put together a little taste of one of the most hidden music cultures in the world. The sound quality of this recorded material also bear the scars of war, and you are hearing it in the same shape as we found it.

Some of the songs included in this mix will be available on the compilation, licensed and remastered.

Somalia has a lot more to offer than meets the eye.