Afrophobia and a culture of violence are costing us the Pan-African vision.

Three years ago, I frequented an African braiding salon in Brooklyn owned by a pair of savvy women from Guinea. I had moved to New York City a year prior to pursue a Master's degree, and with the knowledge that African hair salons anywhere in the world have the same lively atmosphere, I went looking for home. From the beginning, they were excited to meet a fellow African, and told me about the many family members who lived in my native South Africa. Their love for my country was clear. Our relationship became familial over time, and I came to view them as mother figures, le mamzo. They never charged me full price for my frequently-changing hairstyles, instead accepting whatever I could afford. They were proud of me as a young African woman pursuing her graduate studies abroad, and would ask about my grades and progress. There was always a sense that I was one of them, a fellow child of Africa.

One day in the winter of 2016, I entered the salon and was met with an unfamiliar hostility. "You South Africans are no good," they began, "you are killing us for nothing!" One of the owners' brother had been beaten to near-death in a xenophobic attack in Johannesburg that week, and was hospitalized in critical condition. My heart sank. Over the hours-long course of getting my braids done, I was chastised and questioned about the causes of South Africa's violent hatred of African migrants. They wanted to know why South Africans harassed people trying to make an honest living in the country. They asked why South Africans felt superior, despite being celebrated across the continent. "We are all African," they said in chorus, "What is your problem?" In that moment, I represented all South Africans to them, the only person that they could confront and hold accountable for their distress. I apologized profusely, but I could hear the hurt in their voices and feel the anger in their hands. I wanted them to know that I understood their pain, while trying hard not to wince at my own as they pulled and twisted. Eventually, a deep sense of shame overwhelmed me. I sat in that styling chair and cried, and cried.

Recently, Nigeria's Vice President Yemi Osinbajo withdrew his attendance at the World Economic Forum held in South Africa this week. Zambia has cancelled a friendly soccer match with South Africa that was scheduled for this Saturday. South African businesses are being boycotted in eruptions of retaliative protest across the continent. Nigerian singer Burna Boy and South African rapper AKA engaged in a war of words on Twitter, dulling the shine of their iconic and border-shattering collaborative hit.

"The Pan-African vision is in jeopardy and still, I cry."

This week has seen the latest in a string of deadly and destructive xenophobic riots that have erupted in and around South Africa's major townships. Businesses have been looted, homes have been destroyed, and people have been brutalized. Officers of the South African Police Services have been present but mostly inactive, as if handed a front row seat to an action film with looted popcorn in hand. This is nothing new; waves of xenophobic violence have occurred since the dawn of democracy in 1994, displacing thousands of migrants and intensifying in deadliness over the past decade. The biggest eruptions of mob-led attacks happened in 2008, 2015 and now in 2019, with instances of random, isolated attacks occurring frequently in-between.

I call it Afrophobia because the main targets of violence are migrants from Nigeria, Zimbabwe, Mozambique, Angola, Somalia, and more, who have sought political and economic refuge among the poor in South Africa's urban townships. The perpetrators are largely local mobs of young, unemployed Black men with seemingly nothing better to do. 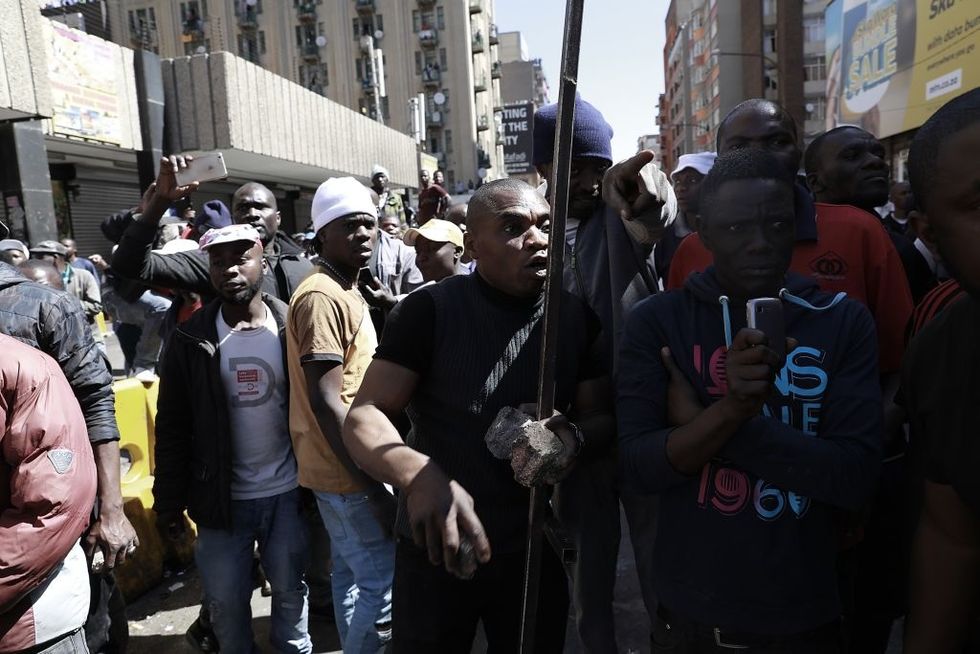 Popular explanations for the rampant Afrophobic violence at the hands of South Africans is that they see African migrants, who tend to set up shop as small business owners in the country's most impoverished urban communities, as competition for scarce resources. This is the sentiment expressed by angry mobs, along with accusations that African foreigners bring drugs and crime into their communities. South Africa is a highly racialized country still fighting for equitable freedom 25 years after it was promised exactly that. While it's true that socioeconomic disillusionment is a catalyst for the violent attacks, the reason why African foreigners are the only targets of xenophobia—and not the wealth-monopolizing European immigrants who are the real threat to economic freedom—is the horizontal culture of identity-based violence deeply woven into the country's social fabric.

African immigrants are the victims of Black South Africans' perpetual inferiority complex. South Africa has a long and twisted history of using violence as a tool for maintaining socioeconomic inequalities. The colonial and Apartheid experience normalized state-sanctioned violence during a decades-long liberation struggle, creating an enduring social psychology of civil warfare. While Black South Africans were fighting against their White oppressors, they were internalizing the self-hatred that the Apartheid project was designed to create. Today, South African society is still a structural hierarchy where people can only understand and express their identities through the oppression of a lesser "other". Afrophobic violence is just the latest in a pattern of identity-based dominance that South Africans have learned to value, and brutal force is still socially sanctioned as the only recognizable method of producing superiority in post-Apartheid life.

"Victims have become perpetrators, and Black South Africans are trapped in a psychological hell with poverty igniting the flames."

It doesn't help that the South African government has fueled the disdain of African migrants in public rhetoric. At a pre-election ANC rally in March this year, President Cyril Ramaphosa incited Afrophobia. "Everyone just arrives in our townships and rural areas and sets up businesses without licenses and permits," he said to a cheering crowd. "We are going to bring this to an end." This is pure scapegoating to mask the government's inability to deliver social services, alleviate poverty, bring back the land, and address the dismal unemployment rate. Now, the President has made a dry statement of condemnation and a worryingly vague commitment to "keep a close eye on these acts of wanton violence and find ways of stopping them.'' I can only hope that Trump-style tactics of stoking resentment is no longer one of his solutions.

After all, the South African government has long attempted to model itself as the leader of the continent, prioritizing the cultivation of strong relationships with other African countries as a top foreign policy agenda. Social media has amplified the current Afrophobic attacks, albeit with a few sensationalist fake news stories, and South Africa is being publicly disgraced and dragged for the rest of Africa and the world to see. In a time where Pan-African solidarity is being celebrated across industries and fields, the consequences of the latest wave of violence are painfully damaging to the inter-country relations, community partnerships and interpersonal relationships that have been blossoming across the continent.

I do my own braids now. The memory of the confrontation still conjures up pangs of guilt and shame. I'm wary of facing the women that once provided me a sense of community, knowing that they see only the atrocities of my countrymen in my eyes.

A-Reece has released another song via SoundCloud. "Selfish" is a minimalist song with its beat consisting mostly of gnarled guitar strings and a pulsating bongo drum.

Watch Joeboy's New Music Video 'All For You'