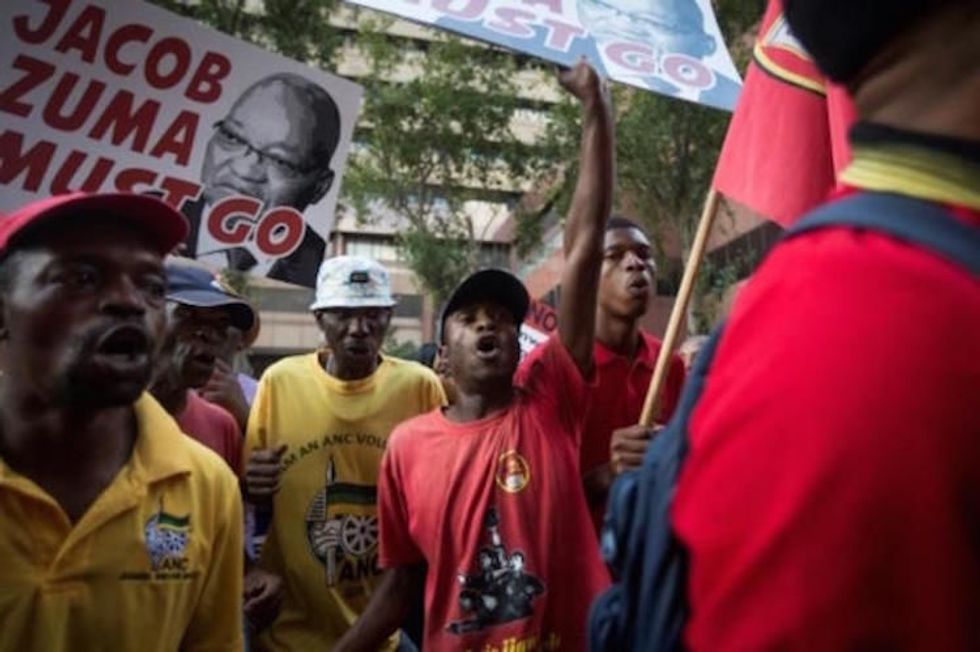 South African advocacy groups are urging people to stay home from school and work on Friday for a national strike in protest of government corruption.

South Africans are planning a nationwide "shutdown" set to take place this Friday, in order to force the president, Jacob Zuma—who recently fired 9 members of his cabinet—to step down from office.

The protest was organized via social media with the hashtags #ZumaMustFall and #SouthAfricaMustRise. Organizers are urging citizens not to attend school or work, or do anything other than participate in the protest.

"On Friday the 7 April South Africans need to take to the streets in masses, wherever you are, with signs of protest to make our collective voice heard. Block highways, stand with your communities, go to political houses, go to prayer meetings, arrange your own marches. Do whatever you can to make your voice heard," read a statement on a Facebook invite for the event titled "The Day SA Comes to a Standstill #SAWillRise." The invite, which is hosted by advocacy groups Zuma Must Fall March and We are South Africans, currently has over 9,000 people planning to attend.

It comes as no surprise, that the government has spoken out in opposition of the protest. “We have noted social media messages which call for a shutdown of the country on Friday. The call made in these messages can have unexpected consequences especially for our fragile economy, business and communities,” Donald Liphoko, a government spokesperson, told News 24.

“When citizens take to the streets illegally, we often witness violence, destruction of property and lawlessness. These illegal protests do not possess the characteristics of strengthening democracy. Those found guilty of any form of violence will face the might of the law,” he continued.

Illegal gatherings are something that the organizers of the march have already warned against. They're advising people in other areas who want to strike, to visit their website for information on how to formally proceed. "Don't just go out and protest. You are not allowed to. It is illegal and you are not protected. You need a strike permit."

They aren't the only group who want Zuma gone. The Integrity Commission of the ANC, asked the president to resign last December, but he refused. The commission plans to ask him once again in a meeting set for April 9, reports Independent Online.

All those in favour of #ZumaMustFallpic.twitter.com/M68wTefdRV