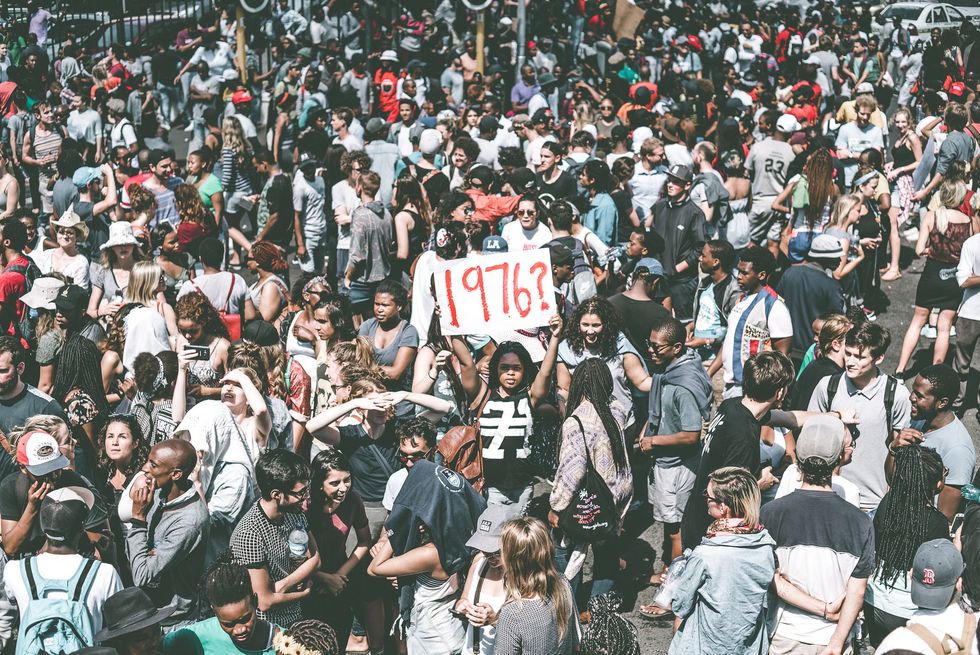 For Youth Day we look back at six moments that show the spirit of 1976 is still alive in South Africa.

Today marks the 40th anniversary of the June 16 Soweto Uprising, in which tens of thousands of black South African students marched in response to the Apartheid regime’s implementation of Afrikaans as the medium of instruction in local schools. Fast forward to 2015, a year of student activism in South Africa in which university students all around the country stood up against the government's proposed 10.5% increase in tertiary education. From the songs, to the now iconic images to the indomitable faces of the movement South African young people disproved the notion of apathy among today's youth. Below, we look back at six moments that show the spirit of 1976 is still alive in South Africa.

The movement started on 9 March 2015 at the University of Cape Town when student activist Chumani Maxwele threw human excrement on the famed statue of known white supremacist and “architect of apartheid” Cecil John Rhodes. The protests were initially about removing the statue but grew to encompass institutional racism at the university.

“We are fighting for the black experience to matter. The people who commemorated [Cecil John Rhodes] didn’t want people like me on campus” Mbali Matandela, a member of the movement, told The Citizen.

After almost a month of protests, occupations and dialogues, UCT’s senate finally voted to remove the statue on 9 April 2015, which was celebrated on Twitter with the hashtag #RhodesHasFallen, signaling a symbolic victory in the fight against white supremacy and the decolonization of tertiary education.

The chorus gets louder as the SRC lead the struggle songs. #RhodesHasFallen (almost!) pic.twitter.com/Lizc7C5GVU

They thought the spirit of the 1976 youth is gone... guess what.. #MyGenerationDidIt#RhodesHasFallen

On 24 June 2015, students at Umfolozi TVET College in Richards Bay broke out in protest, interrupted classes and called for the SRC to be removed, citing their lack of study material, NSFAS’ ineffectiveness and the general lack of support students get from the institution.

Similar protests had broken out a month earlier at the eSikhaleni campus with students complaining about poor facilities, lack of adequate accommodation and unresolved student loans applications. “The majority of students who study at the college come from poor backgrounds. As a result they flock to the college with the hope of receiving loans for their studies through NSFAS. For the college to turn around and say the funds are exhausted is a fallacy,” Lindokuhle Ndlovu, eSikhaleni College SRC President, said at the time.

As a direct result of the protests uMfolozi TVET College Rector Sam Zungu said a study was conducted by NSFAS to reevaluate the application procedures, and a decision was made that students should start applying directly to NSFAS for funding. There hasn’t been a clear indication of the success of the protests as negotiations are still ongoing.

In late July 2015 news broke of a group of students breaking into protest inside a lecture hall at Stellenbosch University. The relatively small demonstration emanated from the institutions’ exclusionary language policy (with Afrikaans being the main medium of instruction at the historically Afrikaans institution) and was led by members of what would later become known as the Open Stellenbosch movement.

As a direct result of the protests Radio DJ and filmmaker Dan Corder, in partnership with Cape Town production company Contraband and the Open Stellenbosch movement, made the now infamous Luister documentary. A scathing look at the ongoing racism and discrimination experienced by multiple students on campus, the 32-minute documentary gained country-wide attention resulting in parliament calling an urgent meeting with the university’s management to discuss transformation.

The granddaddy of them all, #FeesMustFall was a student-led protest movement that started in October 2015 in response to the proposed 10.5% increase in fees at all South African tertiary institutions in 2016. The protests, led by outgoing Wits SRC president Shaeera Kalla and incoming president Nompendulo Mkatshwa, started at Wits University but later spread to surrounding universities in Johannesburg, then ultimately every public tertiary institution in South Africa participated in a #NationalShutdown that saw civil disobedience marches and public disturbances take place all over the country.

Kalla and Mkatshwa were instrumental in ultimately leading the movement to a large march to the Union Buildings in Pretoria where President Jacob Zuma met with students leaders and announced a 0% increase in fees for the next few years.

The #EndOutsourcing protests were a direct result of #FeesMustFall. The two were protested in tandem when university staff across the country pledged their support for the student protests over what they deemed unfair labour practices. Outsourced workers––cleaners, catering staff, garden services and security guards––are usually paid less because they don’t work directly for the universities and have been struggling to be insourced for over 16 years.

Tomorrow we continue our efforts to #EndOutsourcing. All struggles matter. Wits wont go back to business as usual until there's insourcing!

Another direct result of the intersectional nature of #FeesMustFall, the Naked Protest erupted in mid-April 2016 when Rhodes University students protested half naked to stand against the university’s prevailing rape culture. The protests were sparked when an unnamed group published the names of 11 alleged rapists still at large at the university. Demonstrating around the hashtag #RUReferenceList, protesting students demanded that the university review its sexual assault policy and for rape charges to be included in the perpetrators’ academic records.

The Wits SRC joined the protest in solidarity with their own naked protest, lamenting the lack of support for rape victims by university management and the rape culture in general. The protests have sparked nationwide discussion on rape culture in universities.