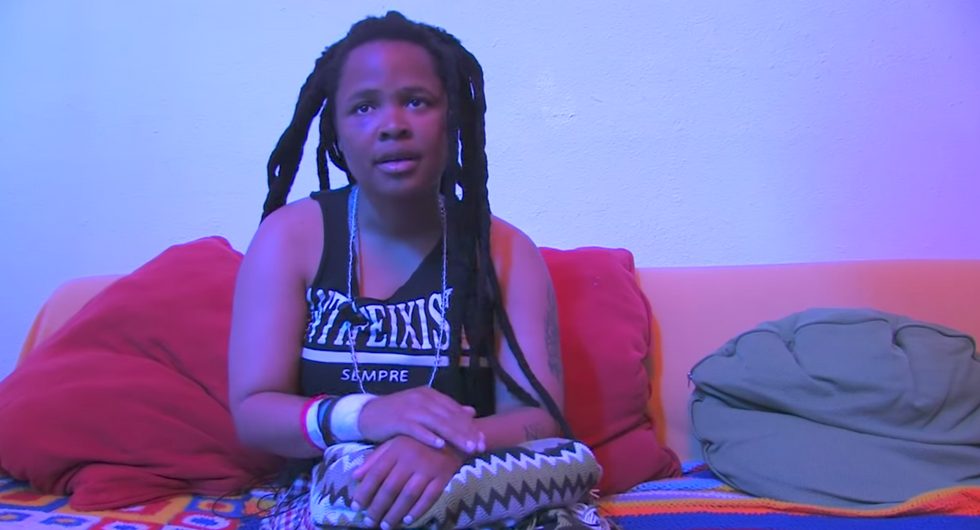 South African artist Sibahle Nkumbi got violently pushed down a flight of stairs by a man following an Airbnb dispute in the Netherlands.

AMSTERDAM—South African photographer and artist Zanele Muholi posted a short Instagram video of her friend, filmmaker and writer Sibahle Nkumbi, getting violently pushed down a flight of stairs by a man.

The man is husband to the owner of an Airbnb apartment that the artists were staying in while in Amsterdam. The two artists were in the city for an exhibition by Muholi.

“We knew that we were late, and we heard the bell ring,” says Nkumbi in a video interview with Netherlands-based journalist Kevin P Roberson. “The lady (owner of the Airbnb) was a little bit upset, but she managed to talk politely. She stated that this is not acceptable: ‘You guys need to pack and leave now.’ I was like, ‘Can you give us a few minutes?’ And I apologized profusely for being late.”

Nkumbi goes on to state that the man started referring to them as “You People,” and went on to to tell Nkumbi she wasn’t the artist and queen she thinks she is. “You need to leave now, this is not Africa,” he told her.

Airbnb CEO Brian Chesky, was quoted by South African entertainment website KWESEfied saying, “Appalling and unconscionable behavior against members of our community runs counter to everything Airbnb stands for.”

The man who assaulted Nkumbi has been arrested and charged with attempted manslaughter.

Watch the video of the incident below and the whole interview with Sibahle Nkumbi underneath.

2017.07.08: Amsterdam. One of my friends/ Inkanyiso crew members was pushed downstairs by the Airbnb owner where we stayed. He threw their belongings out ... for few mins late checkout. She collapsed and ended up in hospital. She suffered internal injuries and bruises. Am so angry with this I couldn't even sleep. This is racism and can't be justified... violence on black bodies as you can see in this video. #racism #evidence #visualactivism #Amsterdam 😭😭😭😭😭😭😰... #lessthan24hours ago ... a young black female pushed and hurt by a white male who screamed in a Dutch language. #genderbasedviolence ... 📹 by #LeratoDumse @dumselerato of @dulovemedia