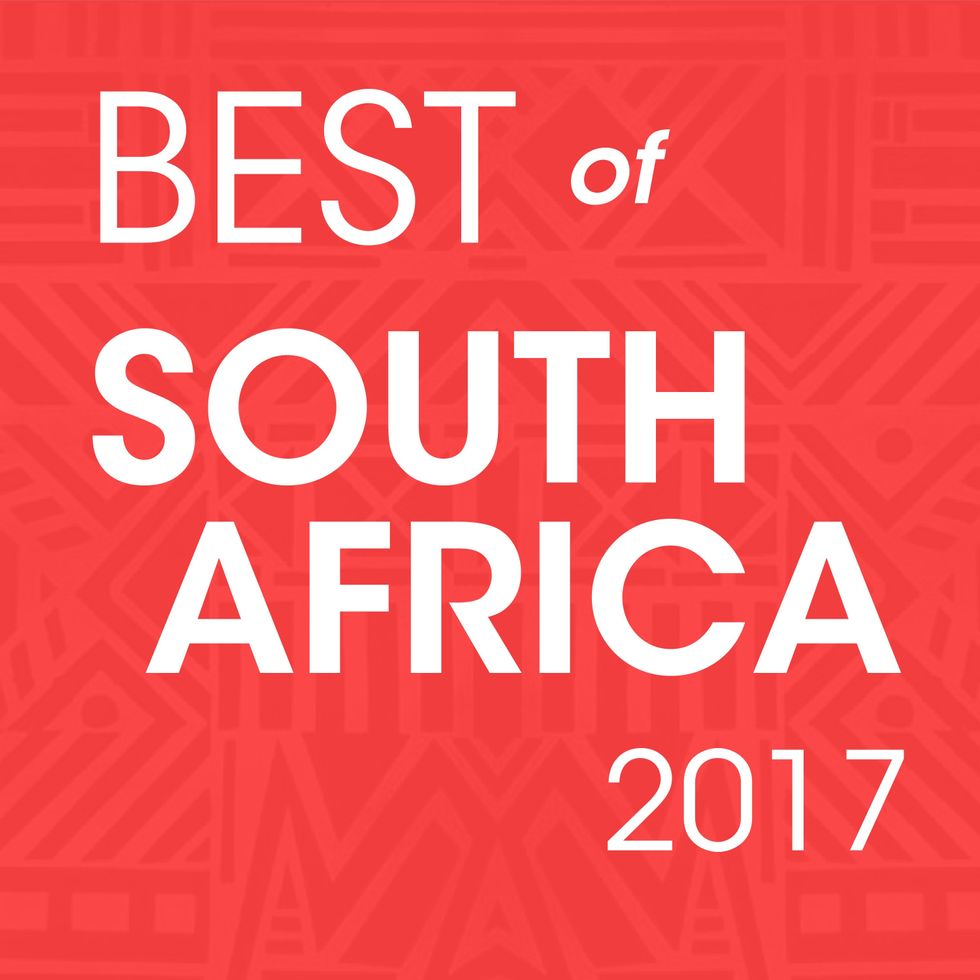 South African hip-hop is forever lit—here are the 10 best SA hip-hop tracks of 2017.

From Shane Eagle and Reason's socially conscious "Julia" and "The Meters," to street anthems like Cassper Nyovest's "Nyuku," impressive storytelling by Kanyi on "Ngqangqa," and everything in between, it's been a great year of beats and rhymes for South African hip-hop.

As the year draws close to an end, here are our favorite SA hip-hop songs of 2017, listed in no particular order.

A-Reece raps non-stop for close to two minutes on the first half of "Meanwhile in Honeydew," and not once does he lose you. On the second part of the song, when the beat switches, he changes to signing, and it's still impressive. A-Reece and MashBeatz make one of the greatest rapper-producer pairs we've seen in SA.

On "Honey and Pain," Stogie T skillfully raps (mid rhymes, poetry and double entendres galore) over a Miriam Makeba sample chopped by Tru Hitz. The song is about the dichotomy of life–struggle and triumph: "Life ain't fair, you can kiss the ground in the ring/ Think it's a breeze, that's only 'cause the pendulum swing/ This is honey and pain, both struggle and gain/ Gold mining in vain if you can shine with a chain."

On "Rigorous," Reason proves he's an anomaly—which all great rappers are. He's mostly known for lines stacked to the brim, but on this song, he doesn't do too much—he uses the fewest words possible to get to the point, and the one-liner hook is catchy as hell. "Rigorous" should have been bigger than it currently is.

"Bryanston Drive" is pure brilliance. It's the perfect combination of pop and hip-hop, and it also has some house and kwaito influences. AKA sounds comfortable, and as much as he celebrates his victories, he is not afraid to talk about his shortcomings. Unfortunately, "Bryanston Drive" is from an album that's not as great.

"Train Rides" probably has the catchiest hook we've heard this year. It's easy on the ear, like most of North God's songs, and sees the man own his space, while rapping about his girl looking like candy cane, being fresh like he just copped some new shoes, which is highly likely all true.

Kid Tini is one of the best of his generation. He spits such sophisticated simplicity as, "Still with that audio crack and you can't fix it." Read that line again, slowly. Which might look easy, but then if it was, everyone else could do it. "New School Bully" lives up to its name, in that the 19-year-old rapper dwarfs rappers his age, and 10 years his seniors with a skill level many won't even reach at their peak. And Tweezy's nice with that boom bap ish. Next year will be interesting.

"Flex Life" is one of the most complete songs of 2017. Mellow keys and a prominent bass line play a perfect backdrop for D.EE Exclsv and Kwesta spit potent verses, and the R&B hook hits the spot.

Priddy Ugly immerses his verses, delivered in his unorthodox flow, into an abyss of mean bass and ethereal pads. His rhyme schemes are impressive, and, as if that wasn't enough, he gets Shane Eagle to deliver an impressive verse. Eagle comes for everyone relentlessly, throwing subliminals at fellow rappers. Imagine a collaborative album from the two.

Rouge is a shapeshifter on "No Pressure." She delivers melodies, raps in a baritone and an alto, and even uses autotune where necessary to get her point across. She does a lot of things on "No Pressure," you even wonder if she ever gets to feature another artist in any of her songs. Put some respek on this woman's name.

Picking the best song on Emtee's sophomore album, Manando, is an impossible task. But "Manando" is arguably the strongest. The storytelling on the song is just out of this world. He paints the picture for us about his muse Manando, from what type of person he was in the hood, to how he died, and how everyone took the news. The story is intricate, and, just like all great stories, is about more than just Manando.

"Amen" sounds like it was made for AKA and Anatii's Be Careful What You Wish For album. The references to God and success, and the simple trap production drive the song. Blayze does the sing-songy rapping thing so perfectly, and on "Amen," he delivers his best effort yet.

On his latest single, Nasty C gives us a screenshot into his life–it's not just money and booty. He can't sleep at night, his friends feel he has changed, he has grown and he prefers business partners over friends. When Nasty C raps about personal issues, he really goes in, and "Changed" is one of those instances. The tone of his voice and the music he raps over create the somber mood the rapper is in.

Riky Rick and Frank Casino have undeniable chemistry. Their first collaboration "Whole Thing Remix" recently won Best Collabo at the South African Hip-Hop Music Awards. On "Family," they are impressive again. "Family" has a great vibe. The two rappers don't too much on their verses–their lines are sparse, and that makes their vocals sit perfectly over the oxymoronic beat, which is both gloomy and happy.

IceMan Beatz' kick is an eardrum wrecker. His bass lines also knock harder than most. Just like every song on B3nchMarQ's EP, if the lyrics don't work for you, then the way the song is put together will blow you away. The rappers switch their deliveries when the beat changes, creating a dynamic piece of art. B3nchMarQ got the sauce.

For the second consecutive year, Kwesta has the biggest South African hip-hop song. "Spirit" tries hard to be "Ngud'," but there's no denying how great of a song it is. Kwesta reps the hood unapologetically, and invites Wale to do the same. "Ngud'" is a crossover success–it has kwaito, house and hip-hop elements without stacking unnecessary layers.

The snail pace rhythm on "Low" gives Frank Casino leverage to spit some of his most potent bars ("They see us, but never see us/ turn critiques to believers/ All my divas got visa"). And not to mention the impressive verse from A$AP Ferg, which sees the Trap Lord change tones in one verse.

A hidden gem from How To Make It In South Africa, a mixtape by this year's best lyricist, according to the South African Hip Hop Awards. Even the greatest lyricists will tell you how difficult it is to make the truth rhyme. On "Better Than Money," Youngsta CPT makes it look easy. On the song he's chronicling his endurance and seeing it bear fruits. And can we talk about that flow, though?

On this amalgamation of kwaito, bubblegum, pop and hip-hop, Buks makes creating an intricate yet simple beat like this one look easy. And his combination of singing and rapping makes the song impossible to box under one genre, but when you attempt to, it ticks most of the boxes of each. Fancy.

"Vaye" is a lush combination of old school kwaito and hip-hop. Maggz is always butter, and he combines singing and rapping flawlessly on this song. Trap soul artist KLY's appearance is the cherry on top of an already great cake.

Zakwe's punchlines never disappoint, and the pounding kick on "Sebentin" forces him to try new flows, as he does towards the end of his verse. Nyovest always makes sure to make his presence felt when featured as a guest, either through compelling delivery and some dope lines. An unexpected combination, but works quite well.

One of the illest producer-rapper combo, Trompie Beat Mochini and N'Veigh, returned with "Marabastad" to finish what they started last year on "Denneboom." "Marabastad" is an early Christmas present for those who prefer hip-hop made of just beats and rhymes, and no other artsy interpolations. N'Veigh is one of the best to ever do it in South Africa, and, quotable after quotable, this song will remind you why.

Ex-Cashtime Fam member Smashis reinvented in 2017 and renamed himself Zingah. On one of the songs that mark his reinvention, "Hyella Mayn," the rapper manages to spit potent bars over a club-ready trap beat by Lunii Skipz.

Flex Rabanyan has lines for days. "I still wanna be dope even after I'm rich, I don't wanna be Riky," or how about, "I don't take shots at niggas that's below me, I ain't a drone?" And MaE has a way of expressing himself that just always works. It's not very often that you find such chemistry between an OG and a young buck.

Big Star is a dynamic artist. He uses three different flows in one verse, and makes it look like it's not a thing. Reason's heartfelt verse is another one of his impressive verses–it's just another day in office. Zoocci Coke Dope's hooks have given us several hits this year, and he renders yet another impressive one on "Flavours."

"Julia" sees the promising lyricist spit some reality raps over warm pads and a head-bobbing rhythm. He raps so effortlessly, about the realities of being an everyday South African (i.e. black): "I try to picture my life if I wasn't a rapper from start/ Maybe college, run and get myself a lil diploma/ I know niggas that have got it they still chilling on the corner."

"Nyuku" is the grimiest and, arguably, the best song on the rapper's third album Thuto. A kick that will leave fractures on your eardrums and an equally aggressive bassline, form the perfect backdrop for Nyovest to drop some battle-ready scripts, rapped in a good mixture of English and SeTswana. His delivery is solid, and he keeps the punchlines, similes and metaphors coming. Probably the most street-centric song of the year.

Reason stays repping for lyricists in the mainstream. On "The Meters," which is a soundtrack to the apartheid movie Kalushi, he talks about the remnants of apartheid in South Africa. His entry point is land reform, but he also touches on the economy which excludes black people. The production trio The Boyz Upstairs gave the rapper an energetic instrumental, and the result is a song that represents a majority of young black South Africans–opinionated, smart and also willing to turn up while, as the adage goes, craving land.

Solo is one of the best doing it right now. On the single, "Napa Valley," the rapper laces a high-tempo rhythm and perennial bass line with his high precision delivery, double entendres, as per Solo fashion. If you don't catch the lyrics, then the man's command of his flow will leave you thoroughly impressed.

Kanyi is an impressive storyteller. If you are educated enough to understand Xhosa, you'll definitely agree. On her latest single "Ngqangqa," she tells the story of a young woman by the name Ngqangqa, who lives a life of crime, and faces the consequences. The rapper's tongue-twisting wordplay and whisper delivery sits well over impressive production by Swedish producer Ted Krotkiewski—a rubbery bass line, some 808s and eerie pads and some robust drums.