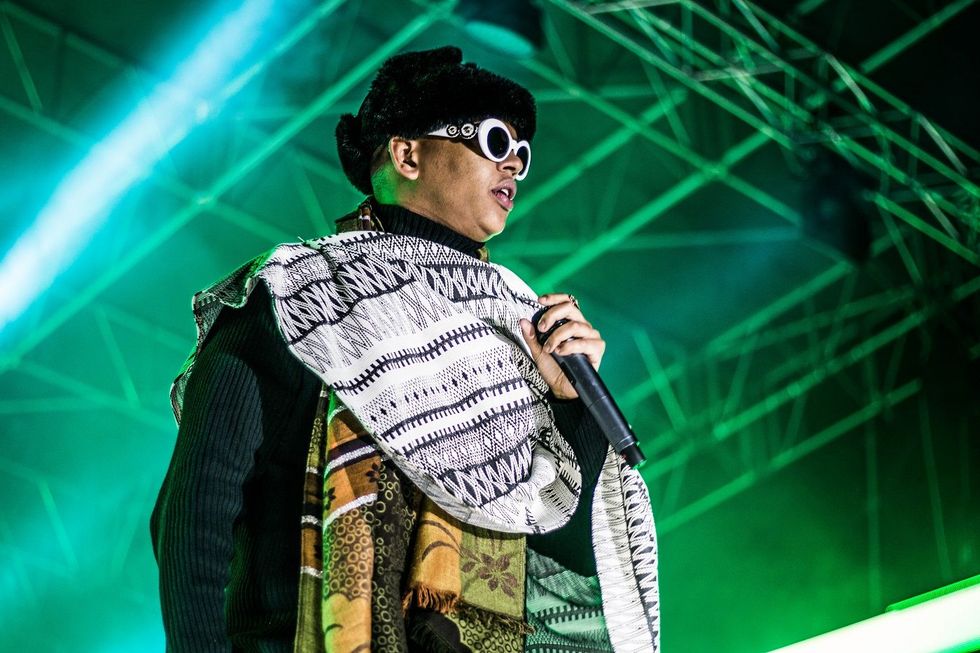 How Da L.E.S paved the way for new school rap in South Africa.

“Da L.e.s changed the game more than most of us would like to admit,” wrote Fred Mercury, former editor of Hype Magazine, South Africa’s only hip-hop print publication, in his farewell piece when he was leaving the publication earlier last year.

The rapper, who’s also known as North God, didn’t do it alone, but he has always been the common factor in the ten years he’s been active. He started with the group Jozi, alongside Ishmael, Crazy Lu and Bongani “Bongz” Fassie. The group released its debut album Muthaland Crunk in 2007, and changed South African hip-hop.

“Muthaland Crunk began what is now the norm in South Africa," wrote Independent Newspaper's arts and culture journalist Helen Herimbi last year. "The N-word isn’t even censored on our radios anymore and it’s heavily littered on songs by South Africans! The biggest rap stars in South Africa right now are more able to copy America and not receive flack for it.”

Jozi was unapologetically doing crunk in an era when the criticism was at its peak and the 'Dirty South' was vilified for killing hip-hop (remember Hip Hop Is Dead by Nas?). In the mid-2000s, South African hip-hop wasn’t as popular as it is today. It was esoteric, consisting mostly of “real” hip-hop, in the form of groups like Optical Illusion, Landmynz, Cashless Society, Writers Block, Archetypes and solo rappers like ProVerb, Tha Hymphatic Thabs, Prokid, Amu, Zubz, Tumi and more, who put a huge focus on lyrics.

Jozi changed all that. Their hit single “What’s With The Attitude (Wayithini Umami)?” had only one rap verse—it was catchy and in plain conversational English. The rest of the song was repetitive melodic vocals by Ishmael, accompanied by the loop of a Vusi Ximba sample. It made sense why the album was called Muthaland Crunk—Jozi had given birth to a newish sound, blending crunk with South African samples.

“We used to have people pulling middle fingers at us at our shows. Right in front of our faces,” Da L.E.S was quoted as saying in the same piece by Herimbi. “And the girls were just screaming. As long as the girls were screaming, it was fine.”

They couldn’t be bothered by the negative response from hip-hop heads. “For the fans, it was refreshing to turn on the TV and see a South African hip-hop artist taking themselves serious, from an image perspective,” mentioned Da L.E.S in an interview with the Zimbabwean-based podcast/ web series 2 Broke Twimbos, last year. Jozi were rocking neon Bape sneakers and those colorful hoodies popularized by crunk, at a time when South African rappers were looking raggedy and didn’t consider the importance of image.

In 2008, Da L.E.S released a solo album, Fresh 2 Def, which took off where Muthaland Crunk left off. The album’s lead single “Tippy Toes” was a catchy finger-snapper, leading with the high-pitch synth heard on most Lil John productions. It came with a dance—pissing off insufferable South African hip-hop heads (myself included) even more.

The second single, “On Fire,” which was lyrically strong—thanks to a show-stealing verse by Maggz, saw Bongz sing the hook in autotune, another crime at the time (remember Jay Z’s “Death Of Autotune” and KRS-ONE & Buckshot’s “Robot”?).

At around the same time, Maggz, who was signed to the indie label Ghetto Ruff, was working with Bongz. He released his debut album The Breakout (2009), which was produced entirely by Fassie. The music was more mainstream than what heads had grown to expect from Maggz, who was an ally of the Soweto rhyme spitter ProKid.

The single “Girls” saw Maggz singing more auto-tuned than rapping – like Lil Wayne did on “Lollipop.” On the album’s intro, Da L.E.S was talking on the hook, cheering Maggz on, as if giving him a co-sign as the leader of that school of rap. He was also featured on the track “We In The Building” alongside Bongz. His and Bongz’s influence on the new direction Maggz’s music was taking was a given.

Jozi was close to Gliteratti (later Glitz Gang —a crew Maggz was part of alongside Morale, L-Tido and Sean Pages). The two entities were on the same page. It was a tough time to be a crunk or trap rapper in South Africa at the time, but they fought the power as a unit.

L.E.S also released a collaborative mixtape with a then up-and-coming Riky Rick in 2011. It was light-hearted, and its name, Last Summer, suited it well. It barely made noise at the time, but it was another building block in L.E.S and Riky Rick’s now blossoming careers.

Da L.E.S now has four albums under his belt—Fresh 2 Def, Mandela Money, North God and Diamonds In Africa. He has released a string of solid singles such as “Heaven,” “P.A.I.D,” “Real Ones,” and is affiliated to one of the biggest rappers in South Africa right now, AKA, performing with him in most of his shows. Another gold star on his CV has to be appearing on Stogie T’s self-titled album. His influence still has an impact to this day.

It all just began with a kid who wasn’t apologetic about being from a well-off family. He embraced his identity as a kid from the opulent Northside of Jozi in his music. He chose to rap about the life he knew, over music that he personally loved.

“That’s what we liked to talk about—bitches, smoking weed, having fun, being in the club, turning up,” he said in the 2 Broke Twimbos interview. “All we wanted to do was tour the country, [get] a bunch of groupies, live that rockstar life. Fuck all this complex shit.”

Which is essentially the narrative most South African rappers in the mainstream are subscribing to. So when you see an A-Reece or an Emtee or a Nasty C flourishing, don’t forget things haven’t always been this way. Mainstream sounding rap wasn’t always a winner in South Africa, but soldiers like North God had to consistently fight.

And don’t sleep on the man’s work. His albums, except maybe for his first one, never disappoint.

Da L.E.S’ latest album Diamond In Africa is out now, and it knocks.