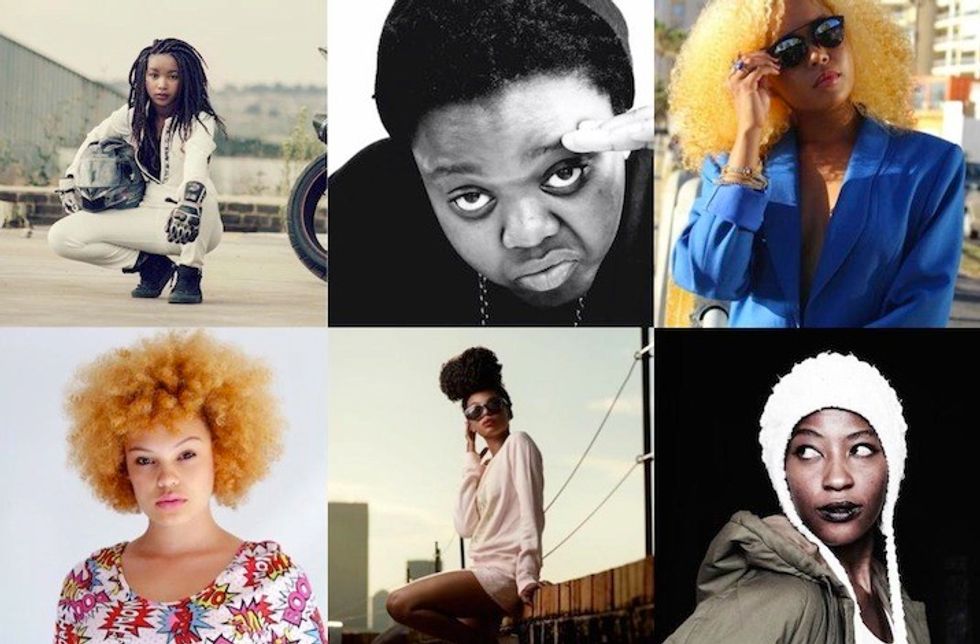 As topics such as sexism and the exclusion of women from hip-hop make headlines internationally, Stefanie Jason spoke to six female rappers in South Africa to get their take on the industry.

Every now and then, the state of women in hip-hop is brought into question. Whether it’s the representation of women in the genre or highlighting the female rappers who have made an indelible mark on the industry, "women in rap" is a topic constantly touched on throughout the globe. The issue saw a recent revival in South Africa when well-known South African musician and poet Ntsiki Mazwai published an open letter to the hip-hop community.

In her letter, Dear Brothers in SA Hip Hop, Ntsiki writes about playing her part on the local rap scene (having hosted renowned Johannesburg-based hip hop events like Splash Jam and Black Sunday), and the treatment and erasure of women from the genre.

“I want to alert you of your sickness of hating, objectifying and not acknowledging the female spirit which has helped in the building of South African Hip Hop,” she writes. While detailing how female musicians tend to be marganalised on the scene, Ntsiki adds that, “As things stand, SA Hip Hop is VERY masculine.”

In a January article titled In Between Cultural Appropriation, Racism, and Sexism: Azealia Banks and the Erasure of Black Women in Rap, Austin McCoy points out how structures like award shows and the media aid the marginalisation of women (particularly black women) from hip-hop. “This was evident in Complex‘s recent story, The Best Rapper Alive, Every Year Since 1979," he writes. “Three women - Roxanne Shante (1984), Lauryn Hill (1998), and Nicki Minaj (2010) - earned honorable mention. So, according to Complex, out of the hundreds of rappers, only three black female rappers have made an impact on hip hop culture as individual artists in 35 years.”

Back in South Africa, the country’s only award show specifically aimed at the genre, the SA Hip Hop Awards, reinforces McCoy’s assertion that structures aid the exclusion of women in rap. With categories like “King of Limpopo,” “King of Gauteng,” “King of Free State,” it’s hard not to wonder how women can get recognition as hip-hop practitioners at the awards. The media’s constant highlighting of South Africa's male rappers has also clouded the contribution that women have made to the country's industry, which Ntsiki details in her open letter. A 2013 XXL magazine article on South Africa’s top 10 rappers, for example, included not a single female rapper.

Despite the harsh reality for women emcees, Osmic Menoe, the organiser of the SA Hip Hop Awards, seems positive about the future for women in the genre. “I think it’s starting to shape up a bit and get more progressive. It’s getting to that point where their voices are getting heard because there are more [female rappers on the scene] than in other years. For them to get to where they are now they also went through a lot of struggles.”

Asked about his thoughts on female rappers in relation to the SA Hip Hop Awards, Osmic recalls the show’s bleak past. “At some point in time, when it came to the awards, there were no women that we could find until [we hosted] workshops. We had a workshop about two years ago – during the second year of the awards - called ‘The female aspect of the culture’,” he says. “The minute five women start looking big and like they are doing it, what that does is bring in 10 or 20 more because they can see that it is possible, and that it can happen.”

As South African female rappers like Gigi Lamayne, Nadia Nakai and Missy RBK continue to rock the industry, I spoke to six emcees about their music and thoughts on being women in a male-dominated industry.

Stefanie Jason writes stories for the Mail & Guardian Friday when she’s not rumbling through Johannesburg’s dusty thrift store stockpiles and gallivanting around the city’s many visual art galleries. You can follow her on Twitter @StefJason.