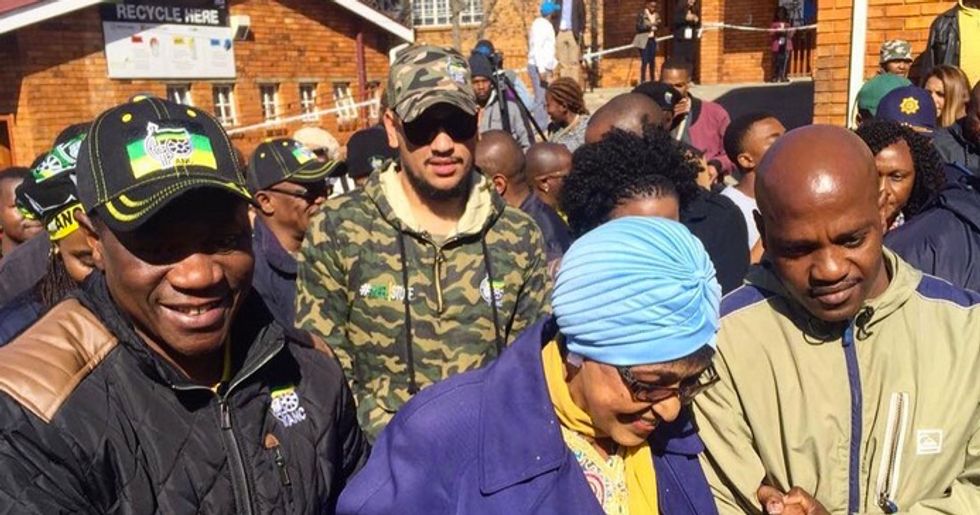 South African hip-hop is at its peak, yet the tradition of political commentary that's been a vital part of the art form has disappeared.

We were in the throes of the first municipal elections during SA hip-hop's peak. Even the ANC dropped the self-crowned King of Kwaito, Arthur Mafokate, for the Prince of South African Hip-Hop, AKA, to perform during their rallies. Hell, the president even dabbed on the opposition.

And yet, hip-hop's most notable involvement in the elections was through performances at rallies and party-endorsing tweets. AKA made it clear he was voting for the leading party, the ANC. So did Cassper Nyovest and a few others. Nothing wrong there. But to equate voting for a certain party with being “politically aware" is taking it a bit too far, to say the least. Also, AKA being defensive about women protesting President Jacob Zuma's rape trial over the weekend was a blatant party bias and showed little understanding of South Africa's rape culture.

The majority of artists stayed quiet during South Africa's definitive political moments of the past year – the DA naming a street after an apartheid leader in Cape Town, President Jacob Zuma's Nkandla saga, Fees Must Fall protests and more.

But it wasn't always this way. South African hip-hop's roots are in fact deeply political. One of the first South African hip-hop crews, Prophets of Da City, built a legacy around fighting apartheid through their music, leading to most of their songs – especially off The Age of Truth album – being banned from SABC platforms. So notable was their activism that they performed at Nelson Mandela's inauguration in 1994.

Cape Town rap trio Godessa carried on the tradition in the early 2000s with songs like “Social Ills" and their album Spillage. There was also Hymphatic Thabs – his song “Tell The Youth," for instance, is a clever piece in which the rapper writes from colonialist Jan Van Riebeeck's perspective when he first came to South Africa.

There was also Mo'Molemi (who is probably the only rapper to shout out former Cosatu General Secretary Zwelinzima Vavi's name on wax), Rattex (check out his song “The Government"), Driemanskap, Ben Sharpa, Tumi Molekane and more. Zubz's attempt with the track “Get Out" led to his song being banned from SABC platforms after the Freedom Front Plus (FF+) party complained that his lyrics were inciting violence.

Hip-hop wasn't half-stepping when it came to political matters – rappers were expressing themselves fully about what they saw around them. Not just encouraging young people to vote for a specific party.

But at a time when hip-hop is at its most influential, it's lost its political voice. Well, some artists, especially outside of the mainstream, try, but their music only lands on a few ears.

Reason is the only mainstream artist who comes to mind, with tracks like “Zim Dollar Zeroes," from his Audio 3D album, a song about, among other things, how Africa should own its natural resources. And his “The (Red) October Freestyle", where he calls out Afrikaaner singer Steve Hofmeyr and breaks down the concept of racism to him.

Hip-Hop responded to Fees Must Fall—an important turning point for South Africa's current generation of politically engaged youth—with crickets. Save for AKA, alongside musician and social activist Simphiwe Dana, showing face at the University of Witwatersrand, hip-hop mainly stayed away.

When South Africans protested Pharrell's collaboration with Woolworths due to the retail giant's trade with Israel, it was only Tumi Molekane that went out to show his support. The rest just couldn't be bothered. Cassper Nyovest was just bitter he wasn't chosen instead of Pharrell.

The rapper Gigi LaMayne, who was a student at Wits last year, dropped a burning track, “Fees Will Fall," at the cusp of the protests. Talking to Afropop Worldwide, she acknowledged the fact that South African hip-hop isn't as involved as it should be in issues affecting young people. “I don't think enough of our artists are trying to write new age struggle songs. And we are not under threat [to go into exile], so why aren't we trying to do this?" she said. She even made an example of a young rapper who said “Racism is so throwback, can we get over it already?" She was very likely referring to this Emteetweet.

It's not clear why hip-hop stopped being socially conscious and caring about politics. But it could be a money issue. It's like the bigger hip-hop became, it forgot about the needs of the people it's serving—kind of like most of our surviving struggle heroes. Yes, hip-hop is not just about politics, and it's silly to blame all our ills on rappers' apathy, but it's problematic for rappers to suppress their opinions because, in the words of AKA during his interview with Sway, “Just don't mess with the government." As opinionated as he is, he was very careful about his responses when it came to politics.

It's not like rappers don't have opinions on the country's issues. They just prefer to play it safe and leave them off their records. The Durban rapper Black Moss on the song “Speak Up" from his highly political 2013 album Public Interest (Post '94), raps, “I'm tired of having political conversations with these rappers behind closed doors but never on these records/ See what I'm saying is we all often talk about the need to change in our society like violence/ but when it comes to speaking the truth, rappers are silent..."

And while it's true hip-hop is not just about “consciousness," it's proven to be a great tool to start conversations. Two years back, a crew that not many South Africans knew of, Dookoom, had one of the most talked-about songs in the media, “Larney Jou Poes." It was a song about farmers treating farm-workers like shit in the winelands. The song cast the spotlight on an ill that otherwise existed comfortably away from the media spotlight. Isaac Mutant's unapologetic demeanor on the song was reminiscent of POC.

Dookoom is just one instance where a song of that nature blows up (well, sort of) and shakes up people outside of hip-hop circles. The Cape Town rapper Ndlulamthi released a song called “Andivoti" (I'm not voting) on the eve of the national election in 2014. On the song, Ndlulamthi eloquently gave his reasons for not voting – basically, there was no party he felt was worth his vote. I saw several of my Facebook friends (mostly from Cape Town) posting excerpts of the song's lyrics indicating they were boycotting the elections a few days ago.

Most politically-charged songs suffer the same fate as Ndlulamthi's street classic. They'll just be known by the artists' niche fanbases. The now-defunct Cape Town-based band Momentss, released a song called “The Vibe" in 2014. On the song, the band's rapper Motheo Moleko, asked about taxes spent on the president's Nkandla homestead and touched on the blatant racism experienced by black people in Cape Town, among other plights. He knew very well that the song – albeit a ridiculously good track – would never get playlisted on any major radio station.

In a South Africa in which the nation's public broadcaster attempted to censor news by banning reports on violent protests, things are unlikely to change. Even though the ban was ultimately reversed following a series of protests, petitions and intervention from Icasa, it's highly unlikely that a song like “The Vibe," asking the president to pay for Nkandla, would play on primetime.

So much is happening in this country that rappers have an opinion about but are too scared to step on the wrong toes and thereby block a major stream of income in the process. This most likely explains why it's the artists who don't have much to lose who have the audacity to call shit out.

At the end of the day, AKA and Cassper don't owe anybody songs about Nkandla or the DA naming a street after an apartheid president. But it's worth noting that the more money hip-hop is making the more careful it's become lyrically. What that means is up for your own interpretation.