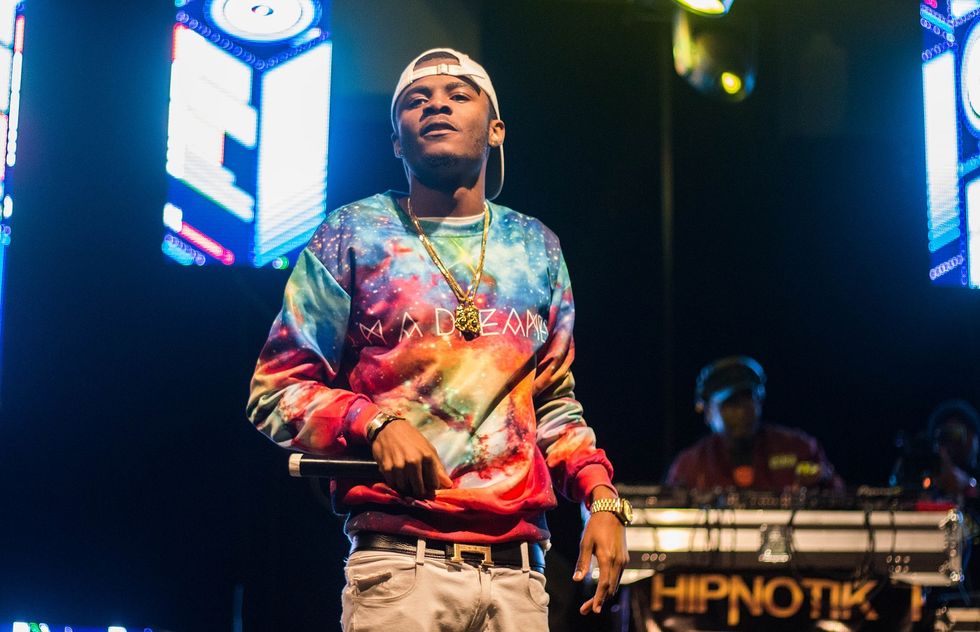 Here are 11 of the architects behind South Africa's current hip-hop sound.

South African hip-hop is at its peak right now. And, love it or hate it, trap is the most prevalent sub-genre.

That's clear when you look at how the recent South African hip-hop hits have mostly been trap ­–“Roll Up" by Emtee, Sidl'ukotini" by Riky Rick, “Way It Go" by DJ Switch, “Couldn't" by A-Reece, “Sim Dope" by AKA, “Hell Naw" by Nasty C, and countless others.

But what's trap without the producers?

Aren't they the ones who create those bass lines that make your face contort when they hit your eardrum? Who places those 808s in the right places?

Below, we list some of the most potent and consistent trap producers from South Africa, who are behind some of the aforementioned hits, and many others.

Only a few trap producers can touch Tweezy in his studio. AKA is one of the few new school rappers who have reservations against trap, but Tweezy gave him an offer he couldn't refuse on the songs “Sim Dope" and “Run Jozi," from the rapper's album Levels (2014). Tweezy has given us some of the most impressive new trap productions including Emtee's “Five-O," Riky Rick's “Sidl' Ukotini (co-produced by Gemini Major)," L-Tido's “Dlala Kayona," Stogie T's “Big Dreams," among a whole lot of others. His production style goes beyond trap as illustrated on more sophisticated beats he's made such as Stogie T's “Diamond Walk," AKA's “Baddest" and “All Eyez On Me." There are also great examples on his beat tapes.

Lunatik's claim to fame was producing K.O's game-changing hit “CaraCara," but the man's proven that he has more tricks up his sleeve. Alongside Ruff and Bizboy, he co-produced another genre-shifting hit, “Vura" by DJ City Lyts. A moment of silence for that bass line. His other impressive productions include “Winning" by Emtee and Nasty C, “Bekezela" by Kid Tini, “Pray for Me" by Emtee, “What U in it 4" by A-Reece, and a lot of others. He recently provided some of the most impressive beats on Emtee's latest album Manando, on the songs “Platinum," “My OG," and “Bambelela." There's something about the way this man tunes his bass lines. He also produced a good portion of Ma-E's stellar 2016 album Township Counsellor.

There's no Emtee as we know him without Ruff. He produced the rapper's breakout single “Roll Up," and went on to produce most of the his debut album Avery, including the hit singles “We Up" and “Pearl Thusi." He's also the main producer on Manando. Alongside MarazA, Ruff is also the man behind Mashayabhuqe's monumental breakout EP The Black Excellence Show. He also produced most of Sjava's debut album Isina Muva. Ruff is definitely one of SA trap's most valuable players.

Mash Beatz's most prominent project to date is A-Reece's debut album Paradise. Mash produced a good portion of the album, including the single “Zimbali." His latest prominent productions are Da L.E.S's “Popular Demand" and A-Reece's “Meanwhile in Honeydew." While Mash Beatz's sound has a certain uniformity, it's also an anomaly in that he uses different sounds for almost all his beats–the only thing they have in common is his bass line and his frequent use of keys.

Probably the most innovative trap producer to come out of South Africa, Wichi 1080 has created his own sound. He works with an equally innovative rapper, Priddy Ugly, whose debut EP, You Don't Know Me Yet, he entirely produced. Wichi 1080's bass lines are ice-cold and hit your eardrum where other producers' don't. The producer also crafted the beats for trap soul artist KLY's EP KLYMAX, which also bangs hard. Other notable Wichi 1080 productions include “Sheba Ngwano" by Rouge, “7even Days" by Refi Sings, “On My Own" by Shane Eagle and Priddy Ugly's latest single “Tshela." Wichi 1080 is working on Priddy Ugly's upcoming album EGYPT, and we bet our souls it will be one of the best albums of 2017.

Revisit our in-studio interview with Priddy Ugly and Wichi 1080.

Anatii changed the game more than he's given credit for. Even though his production goes beyond trap, straddling pop and other styles you can't box, his trap beats are highly-impressive (“The Saga" by him and AKA is the prime example). At 14, when South African hip-hop still sneered upon mainstream sounding rap music, Anatii produced the smash hit “When It Rains" by L-Tido, ushering a new direction for South African hip-hop alongside producers, such as Bongani Fassie, who dared go against the status quo. Anatii produced most of DJ Dimplez' album Zeal (2014), including the hit single “We Ain't Leaving." He's also behind “Bad One" by Cassper Nyovest, "Ghetto" by Cassper Nyovest, DJ Drama and himself, and contributed production to his joint album with AKA, Be Careful What You Wish For. Put some respek on this man's name.

Revisit our coverage of AKA and Anatii's joint album here.

Because of his skills on the mic, Nasty C is hardly given credit for his production. But the Durbanite produces a large amount of his music. He's behind some of his hits such as “Hell Naw," “Squad Goals," “A Star Is Born," “Friendzone," and “Phases," among others. He also produced the smash hit “Way It Go" by DJ Switch, in which he's featured alongside YoungstaCPT and Stogie T (then Tumi Molekane). He may not necessarily produce for other artists but himself, but leaving him out of this list would be a dis-service.

Zoocci Coke Dope is a silent killer. His first major production credit was Blaklez's hit single “Freedom or Fame." Recently, Zoocci has been the go-to-guy for beats and hooks, working with the likes of A-Reece, Big Star, Ex Global, DJ Speedsta, Chad Da Don, Stogie T, among others. His sound is minimal—his beats aren't unnecessarily busy, yet effective. That's how geniuses do it.

Cokayn Beats is another silent killer. His recent high-profile production is “My Crown" by Emtee on Manando. Last year, he contributed some bangers to Stogie T's self-tiled album in the form of the hit single “By Any Means," as well as album cuts “Chairman of the Board," “Pray For Us" and “Clean Stuff." It's one thing to produce one song for Stogie T, who's known for being a perfectionist, but for him to allow you to produce a handful of songs on an album in which he's changing his sonic direction means you're definitely up to something. Cokayn also co-produced “Sidl' ukotini" by Ricky Rick, “Gawd Level" by Stilo Magolide and “Janga" by B3nchMarQ, among others, of course. Don't sleep.

Gemini Major is the true definition of a beast. He raps, sings and most of all, makes magic behind the boards. He produced Nasty C's breakout hit “Juice Back," which went on to feature Davido and Cassper Nyovest on the remix. The first time Khuli Chana was heard rapping on a trap beat was on the hit “Walking and Dabbing," which, as you guessed, was produced by Gemini Major. The man's hit-list is extensive – “Switched Up" by Nasty C, “Thixo" by L-Tido, “Tito Mboweni" by Cassper Nyovest, “NDA" by Nasty C, “Skelm" by Cassper Nyovest, “Day Off" by Stilo Magolide and Nasty C, and we've barely scratched the surface. Gemini Major also contributed to the compilation F2D Presents: Hall of Fame by him, Da L.E.S and Yanga. Major was briefly signed to Cassper Nyovest's label Family Tree, which he left to join Da L.E.S' Fresh 2 Def. He's currently not signed to either label, but all we know is we want more music from him.

Sabelo Mkhabela is a hip-hop head and OkayAfrica's South Africa staff writer. He doesn't mind you telling him who he left out of this list on Twitter: @sabzamk