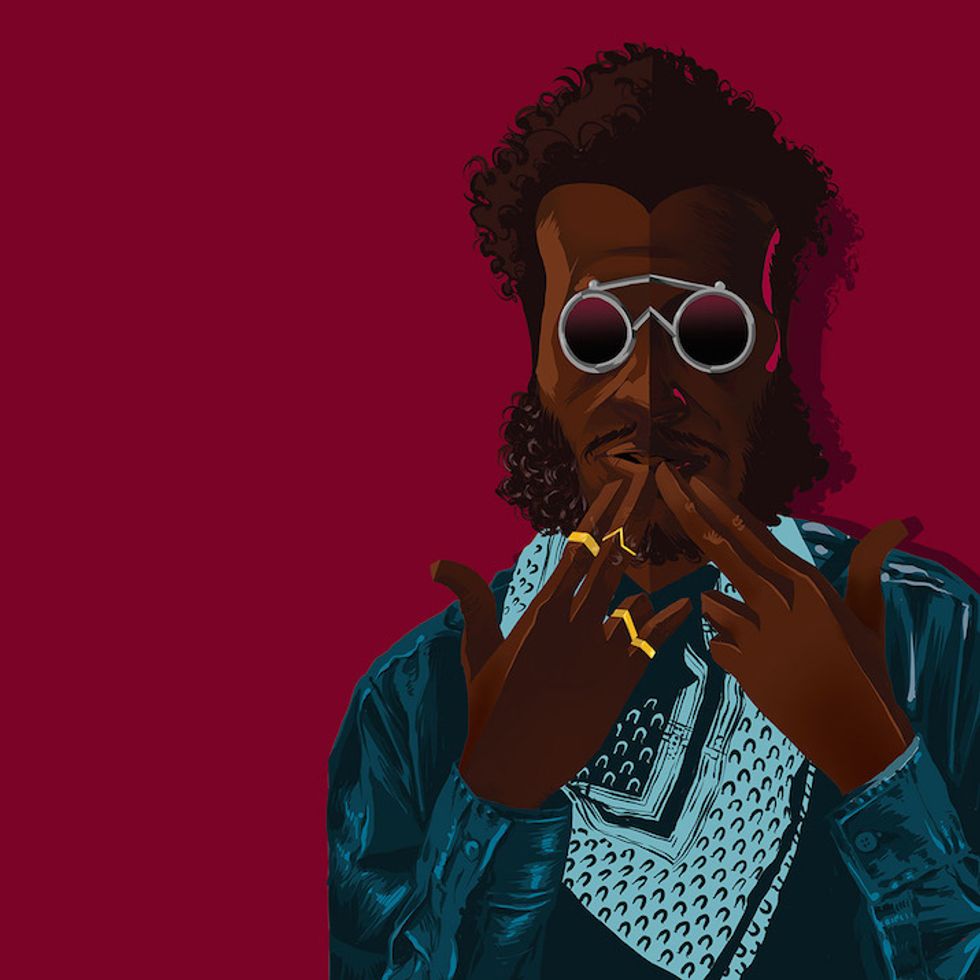 All images courtesy of Pola Maneli

Pola Maneli is a South African freelance illustrator and art director who centers his work around blackness and the multi-dimensional experiences of people of color. Blending bold colors and contemporary iconography with floral and faunal motifs, Maneli uses his art to speak out against the notion of a monolithic black culture. As he told us over e-mail, "My work concerns itself with reflecting expressions within the spectrum of blackness."

A quick look at Maneli's portfolio shows the work of an an artist who revels in vibrant color palettes and bold statements on the rampant disregard for black lives in the US and across Africa. "The work is mostly of quite a political nature and looks at everything from pop culture to government politics through a lens of what it means to be black in South Africa," Maneli says. "It all sounds very serious, but aesthetically the work is far from morose." His more commercial work includes the cover artwork for South African supergroup Fantasma's Free Love LP.

Born and raised in Port Elizabeth, Maneli has been drawn to illustration since his early childhood. "I've been drawing ever since I can remember," the artist says. "I would arrive super early to creche and the only other person that was ever there at that time was the prinicipal's son. He was a much older kid, but for some reason he liked me, and took it upon himself to teach me how to draw the Teenage Mutant Ninja Turtles characters."

Later on, while studying visual communication at the Nelson Mandela Metropolitan University, Maneli began to use his craft as a conduit for social commentary. "I was learning how to decipher visual language at university," he told us. "But even though I was being taught how everything we see alludes to some deeper meaning, it wasn't until I started dabbling in identity politics and the role representation plays in forming those identities that I saw all art as an inherently political tool."

"Like most POC I didn't grow up with a lot of choices when it came to characters/people in the media or arts that I could relate to. I think we're still suffering from that now which is how we've ended up with everyone seemingly only being able to name 2 people of color within the visual arts; Frida Kahlo and Basquiat. I would have loved to have been exposed to more African creatives in the arts as a teenager. I'm starting to unearth those people for myself now, but at the same time I wish I didn't have to dig to find the names of African artists."

Maneli tells us that his recent work is geared towards lifting the stigma surrounding mental health in the black community--a topic that has often been maligned among communities of color as a frivolous adoption of Western culture. "Lately I've been trying to explore the anxieties and depression that some of us within blackness experience," Maneli says. "I feel like that's not spoken about enough; usually everybody just wants to see us lifting our chins up and striding on defiantly against all of the violence that we're exposed to. And I understand the need for a narrative that speaks to our awesomeness and that doesn't portray us as victims (as the media so often does). But I also don't think acknowledging your vulnerability is the same thing as victimizing yourself. If we're talking about portraying people of color in a more human light, then that has to include everything that comes with the full spectrum of humanity - and that means having to talking about sadness."

Maneli shared some of his new illustrations with us--a series of sketches in the style of a fashion lookbook. "[Street Wear] is a way for me to show my appreciation for fashion. Most of the work that I look at and that I'm inspired by is actually photography and fashion. I feel like right now those mediums are the most effective at expressing a tone or mood relevant to black culture."

The signature triangular features of Maneli's characters are based on simplified abstractions of Ndebele patterns, an aesthetic choice which hints at a foundational blackness he hopes doesn't seem too forced. "I use my knowledge of aesthetics and semiotic meanings to depict everything from black rage and anger to effortless cool, pride and satisfaction," he says. His main preoccupation, however, lies in what those who encounter his work take away from the experience. "It all sounds very complex, but really at the end of the day all that matters is what the viewer feels when they look at the work. If it somehow resonates with their lived experience then I've done my job," he says.

Click through the gallery above to view Pola Maneli's conceptual Street Wear series. Check out more of his work on Behance,  Tumblr and Facebook.